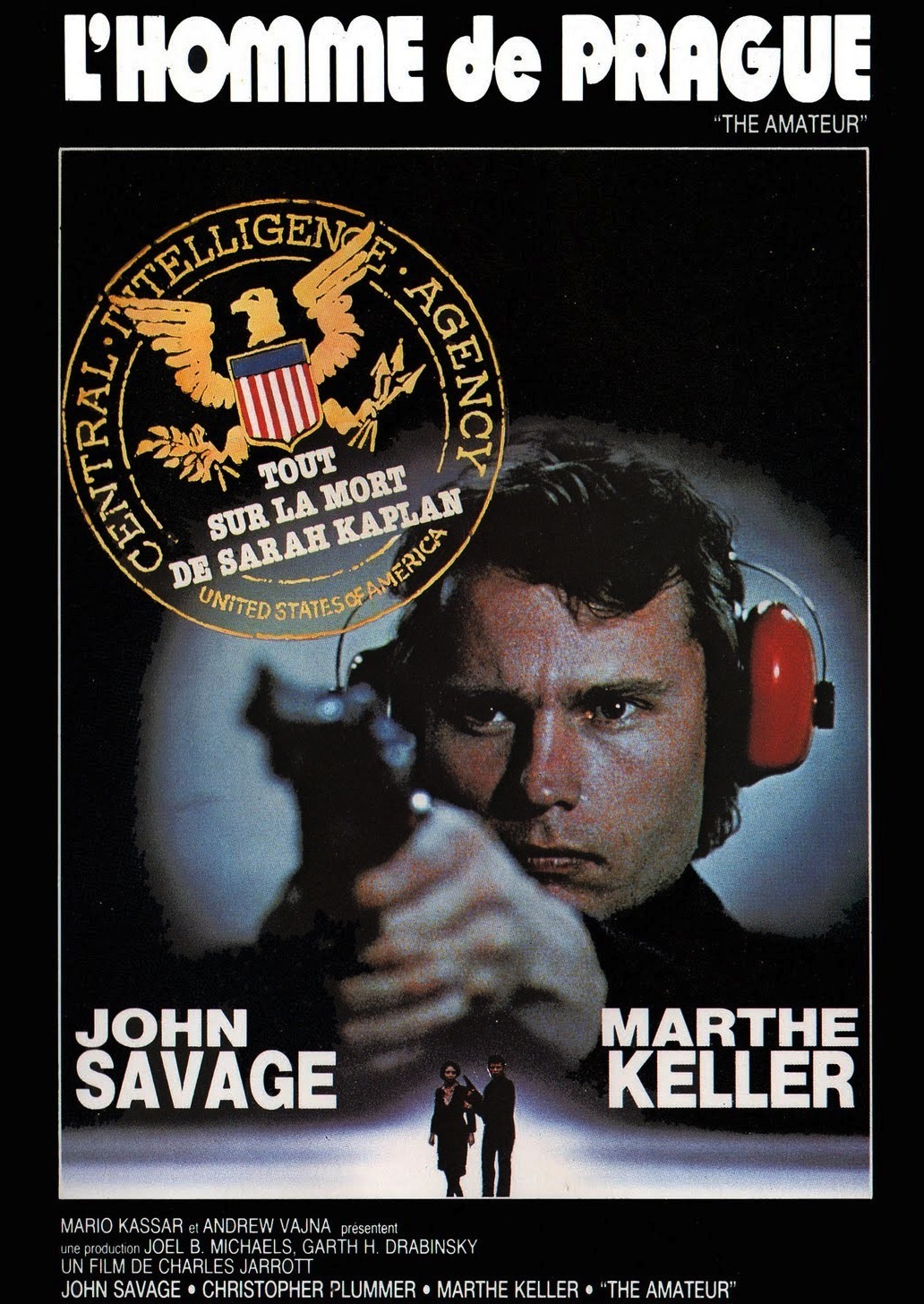 Director Charles Jarrott's 1981 thriller The Amateur was released in France and Quebec as L'homme de Prague.

Neither patriot nor pro

Tuesday, March 2, 1982.
THE AMATEUR. Written by Robert Littell and Diana Maddox, based on Littell's 1981 novel. Music by Kenneth Wannberg. Directed by Charles Jarrott. Running time: 112 minutes. Restricted entertainment with the B.C. Classifier's warning: some gory violence.
THRILLER WRITING IS A special craft. A good thriller, such as Robert Littell's The Amateur (Dell; $3.25) grips readers and holds them in its world.
Its plot is the vehicle for a succession of shocks and surprises, all designed to propel the story along. Book reviewers call them "page turners" and, at their best, thrillers are a genuine popular art form.
Thriller movies are a variation on the theme. A good thriller, such as director Charles Jarrott's The Amateur, offers about two hours of delicious tension.
Because it is a more concentrated experience, the motion picture emphasizes the elements of action and suspense. Done well, the movie version keeps us on the edge of our seats wondering what happens next.
Thriller reviews are a special problem. Since so much of the effect is linked to surprise, almost anything the reviewer reveals is likely to dilute and diminish the direct experience for the review's readers.
I was lucky. I encountered The Amateur with no prior knowledge of its plot or characters, and was delighted at how well director Jarrott's thrillercraft works.
Despite the staggering number of espionage epics that have been produced over the years, The Amateur manages to offer us a fresh look into the business of the Company and its competitors. Its title provides us with a clue to the emotional foundations of the action.
"Amateur," says Webster, "noun [from the Latin amator lover] One who cultivates a particular pursuit, study or science from taste, without pursuing it professionally."
Who, then, is The Amateur?
The obvious choice is Charles Heller (John Savage), a civilian computer programmer who works for the Central Intelligence Agency (CIA) in its Langley, Virginia headquarters. The film's central character, he is driven by the need to do something when political terrorists murder his fiancee, Sarah Kaplan (Lynne Griffin).
Superficially, The Amateur is the story of Heller's one-man revenge mission. Strictly speaking, though, Heller's amateur avocation is Elizabethan cryptography, specifically the nettlesome question of who really wrote Shakespeare's plays.
The same question troubles the professorial Antonin Lakos (Christopher Plummer). Although Lakos serves as the head of Czechoslovakian Counter Intelligence, his real passion is the Prague Bacon Society, an organization dedicated to the proposition that Sir Francis Bacon was Shakespeare's literary ghost.
Sharing the same amateur interest is Soviet cultural attaché Viktor Rodzenko (Jan Triska), the KGB's station chief in Prague. Rodzenko is romantically involved with Gretchen Franke (Chapelle Jaffe), a member of the terrorist group responsible for Sarah's death.
Follow the cryptic clues, and we come to the root meaning of amateur. It is lover.
Since love makes the world go around, lack of it may be what sends it awry.
When Heller meets Sam Kaplan (Jan Rubes), his murdered Sarah's father, he learns that the old man lost a wife and two children in the Nazi death camps. After the war, Kaplan personally avenged them.
But "it didn't bring them back from the dead," Heller protests.
"It brought me back from the dead," is Kaplan's simple reply.
In Prague, Heller meets a young Czech woman named Elisabeth (Marthe Keller) who runs a safe house for the CIA. Asked why she does it, she answers that "it has its advantages."
"Name one."
"It fills my days."
"With what?" Heller persists.
"It fills my days with fear."
Elisabeth began working for the CIA after her poet/protester husband died in a communist prison. Like Kaplan and Heller, she is alive and must do something.
Here is a change. Neither of the familiar spy motives — patriotism or professionalism — are invoked to explain Littell's characters.
Here are people with passionate, personal reasons for taking risks, people who have gone from amator to amateur.
Yes, I'm deliberately avoiding plot details.
I'll tell you that 1973's Day of the Jackal and Three Days of the Condor (1975) are among my favourite movie thrillers. I'll  tell you that I enjoyed The Amateur (book and movie) and wouldn't think of ruining your enjoyment by telling too much.
As for the rest; well, trust me.

Afterword: Filmed in Toronto with location work in Vienna and Washington D.C., The Amateur was nominated for 10 Genie Awards, including best picture. Despite favourable reviews, the picture was given little promotion by 20th Century Fox, its distributor outside of Canada. Among the critics who liked it was The New York Times's Janet Maslin, who noted in her April 1982 review that Fox had allowed the picture to "sneak into town without advance screenings." As a result, it tanked at the box office, and failed to make back its estimated $10.6 million production costs.
Those who did see it found its take on the spy genre intriguing. In retrospect, the story (with its focus on political terrorism) was "ahead of its time," according to film historian Wesley Alan Britton, author of the 2006 book Onscreen and Undercover: The Ultimate Book of Movie Espionage. That might have pleased screenwriter Robert Littell, who otherwise thought "the movie was awful." In a May 2006 interview with British book reviewer Ali Karim, Littell said that he wrote (and sold) The Amateur as an original screenplay. The novel, published in May 1981, was written after the film went into production. Littell also recalls Jarrott asking him to read the script as rewritten by Diana Maddox just before the film went before the cameras in 1980. He did, going on to severely criticize it and offering to fix it for $5,000. Jarrott never got back to him, Littell said, adding that he learned, years later, that Maddox was Jarrott's wife.
Littell's final titbit, while quite delicious, appears not to be true. Biographical sources agree that in 1980, Jarrott was married to South African-born actress Katherine Blake. They divorced in 1982 and when he remarried, in 1992, it was to a Suzanne Bledsoe. Aside from Littell's remark to his interviewer, I can find no evidence of anything other than business links between writer Maddox and director Charles Jarrott.

See also: While The Amateur was still playing in Vancouver, I had the opportunity to do an interview with director Charles Jarrott.