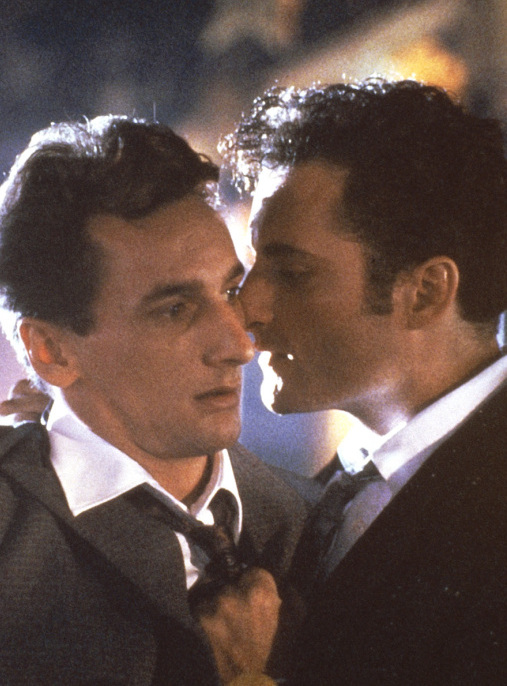 North of the border noir


After a half-century-long career in supporting roles, Kim Coates found stardom as biker “Tig” on TV’s Sons of Anarchy. Born on this day (February 21) in 1958, Coates made his first feature-film impression in director Martin Lavut’s 1988 neo-noir feature Palais Royale.

Monday, May 15, 1989.
PALAIS ROYALE. Written by Hugh Graham. Music by Jonathan Goldsmith and Lawrence Shragge. Directed by Martin Lavut. Running time: 92 minutes. 14 Years Limited Admission with the B.C. Classifier’s warning: some violence, occasional nudity, suggestive scenes and very coarse language. SHE'S A CHARMER. Though he doesn't even know her name, she has him spellbound.
During the day, her image peeks at him from billboards. At night, he dreams of holding her in his arms as they glide across the dance floor of the Palais Royale.
She's the Royal Cigarette Girl (Kim Cattrall). To young, ambitious bookkeeper Gerald Price (Matt Craven), she represents everything fashionable, sophisticated and desirable.
One day, he sees her in the flesh, a vision of poise and beauty waiting by a streetcar stop. He tries to speak to her.
He's awkward.
She's flustered.
Without a word, she rushes off, leaving behind an unintended token, a printed invitation to a reception at the city's most famous nightspot, the Palais Royale.
Perhaps the filmmakers saw her as their lucky charm.
Two years ago [1987], when the producers of Palais Royale signed Kim Cattrall to star in their neo-noir romance, they knew that her previous Toronto pictures had been box office winners.
Porky's, the 1982 creation of Toronto-based director Bob Clark, remains [in 1989] the most successful Canadian-made movie of all time.
Police Academy, a 1984 American feature shot in Toronto, is still [as of 1989] the most successful foreign film made on location in Canada.
Since both films featured Cattrall, why not apply her talismanic talents to director Martin Lavut's tale of obsession and criminal involvement in the Queen City?
Here, she plays Alice, aka Odessa Alexandra Muldoon, a former farm girl whose sultry good looks have brought her some fame as a model and mobster's moll.
A femme fatale role, it gave the former B.C. resident an opportunity to rehearse the tough-yet-vulnerable quality seen in her subsequent "bad girl" screen assignments, Masquerade and Midnight Crossing (both 1988).
As written by Toronto radio and TV dramatist Hugh Graham, Palais Royale has the smitten Price take a job with minor mafioso Tony DiCarlo (Kim Coates) so he can be near Odessa.
When local godfather Michael Dattalico (Dean Stockwell) begins to favour the imaginative bookkeeper's "creativity" over his nephew Tony's arrogant blundering, the stage is set for some confrontational violence.
Palais Royale is not without charm. Shot in Toronto in 1987, its highlight is Stockwell's dress rehearsal for his Oscar-nominated Married to the Mob role.
"Toronto is a crime-free city," his Dattalico tells the erring Tony. "Toronto the Good."
"I don't need associates who pack pieces," he says, emphasizing the need for a more gentlemanly style. "We're north of the border now."
Director Lavut, unfortunately, has many of Tony's problems. His claustrophobic noir approach fits neither the time nor the place. His film offers plot, characters and attitudes appropriate to the U.S. in 1949.
Its setting, though, is "north of the border," circa 1959.
Palias Royale, we're told, is a rare instance of a movie in which Toronto plays "itself." It does so unconvincingly.
Despite its numerous dialogue references to street and place names, despite scenes involving streetcars and 11 o'clock bar closings, Lavut's picture has remarkably little sense of place. It certainly doesn't feel like the Toronto that I lived in in 1959.
I had the same trouble with his characters and their problems. Nothing in screenwriter Graham's tale of love and corruption seemed grounded in reality and, as a result, neither Cattrall’s considerable charm nor Stockwell's preview performance works much magic.
A film bound for TV's Canadian-content ghetto, Palais Royale is a film I wanted to love, but had to work just to like.

Afterword: For Torontonians of a certain age, the words "Palais Royale" call forth magical memories. Built as a boat works, it was converted into a waterfront dance hall in 1922. By the mid-1930s, it was the hot spot in a decidedly chilly city, the place to hear the big bands of Duke Ellington, Count Basie, the Dorsey Brothers and “Canada’s King of Swing,” Bert Niosi. It stood at the foot of Roncesvalles Avenue next to the Sunnyside Amusement Park and, for pre-teens, it represented the next, somewhat scary, stage in the maturation process. After 1955, the year Sunnyside was razed to make way for a highway, the Palais went into decline. Designated an historic site by the city in 1974, it operated as a concert hall until a 2005 renovation transformed it into an upscale “event venue.”
The 1988 Palais Royale movie provided University of Saskatchewan graduate Kim Coates with his first showy big-screen role. He’d made his initial acting impression playing the title character in Tom Kerr’s production of Macbeth at the 1986 Stratford Shakespeare Festival. His stage career included a turn on Broadway, where he replaced Aidan Quinn as Stanley Kowalski in the 1988 Broadway production of A Streetcar Named Desire. An imposing presence, Coates made his TV debut a year earlier, in a 1987 Miami Vice episode prophetically titled Viking Bikers from Hell.
Like the ever-reliable Michael Ironside, Coates made his career in supporting roles, working on both sides of the border and in all media. He reunited with Kim Cattral in Toronto a year after Palais Royale, where they played an argumentative Italian immigrant couple in the 1989 feature Brown Bread Sandwiches. In 1996, their paths crossed again, when both had supporting roles in the shot-in-Vancouver police thriller Unforgettable.
Among his starring roles was Mantha, the principal villain in the unintentionally hilarious 1989 Vancouver-made spy thriller Cold Front, and the off-type Graham Braithwaite, a symphony strings player who goes on the road with a country and western band in director Sandy Wilson’s charming romantic comedy Harmony Cats (1992).
He’s best known, of course, as the violence-prone Alexander "Tig" Trager, a part he played in every episode of the seven-season FX-TV series Sons of Anarchy (2008-14). In 2016, Coates took his turn playing a comic-book superhero in director Shawn Crahan’s Officer Downe, based on a 2010 graphic novel about a relentless L.A. cop who comes back from the dead to continue fighting crime. Late last month (January 28), the Alliance of Canadian Cinema, Television and Radio Artists (ACTRA) presented him with its 2017 National Award of Exellence. The Saskatoon-born Coates turns 59 today (February 21).