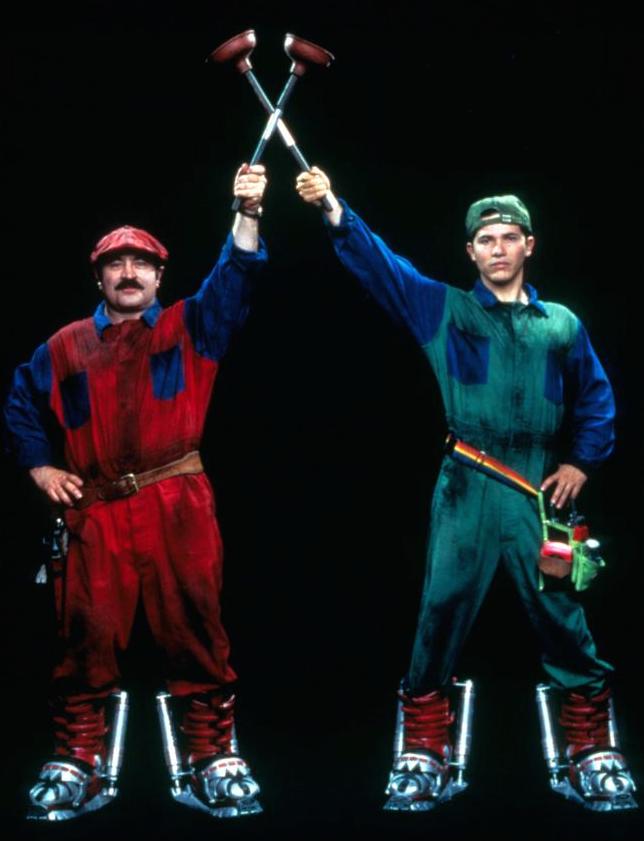 Not in Brooklyn anymore


Participants in a 2005 poll named it “the greatest game of all time.” Published by Nintendo, Super Mario Bros. made its debut in Japan on this day (September 13) in 1985. Less well received was the 1993 live-action movie adaptation, a cartoonish comedy also called Super Mario Bros.

C: > FILMBOMB!
Good Morning. Please make your selection:
A.    In the tradition of Howard the Duck
B.    Hopper the Dino
C.    Movie adaptations of video games
D.    The Japanese respect for craft.

Select  D
Created in the mid-1980s by Nintendo programmers Shigeru Miyamoto and Takashi Tezuka, the Super Mario Bros. video game offers as heroes a pair of skilled craftsmen. Identified as plumbers from Brooklyn, New York, the brothers are proud of their abilities and use the tools of their trade in the battle against the evil Koopa.

Select  B
As King Koopa, actor Dennis Hopper is the T. Rex of Dinohattan, capital city of an alternate universe populated by highly evolved dinosaurs. In the Super Mario Bros. movie, his ambition is to cross the dimensional gap and extend his rule into the universe of the evolved mammals.
To do this, he needs the meteor fragment possessed by Daisy (Samantha Mathis), the exiled dinosaur princess who was hidden away by her mother in Brooklyn’s St. Teresa's Orphanage some 20 years ago.
Currently a student of palaeontology at NYU, Daisy is kidnapped by Koopa’s comically inept cousins Spike (Richard Edson) and Iggy (Fisher Stevens). Dedicated to her rescue are the Italian-American Mario brothers, Mario (Bob Hoskins) and Luigi (John Leguizamo).

Select  C
Despite the notorious failure of such game-inspired films as Tron (1982), Clue (1985) and The Wizard (1989), the directorial team of Rocky Morton and Annabel Jankel were willing to pick up where the project's original director Gary Beeman left off.
After all, Nintendo claims 82 million Super Mario Bros. game sales worldwide [in 1993].
Market potential is no guarantee of success, though.
Game playing, an activity involving hand-eye coordination, is qualitatively different from movie viewing, something that engages the gut and, occasionally, the brain.
Creatively, their Super Mario Bros. fares no better than other toy movies. “Mario,” says Luigi in a line that sums up its screenplay’s total lack of originality, “I got a feeling we’re not in Brooklyn anymore!”
How long can you play games before your thumb goes numb? How many bizarre costumes, prosthetic make-up effects and pointlessly spectacular visuals can you watch before your eyes glaze over?

Select A
Seven years ago, George Lucas’s buddy Willard Huyck offered the world Howard the Duck, an effects-laden tale of a foul-talking fowl from another dimension. The world stayed home in droves.
With Super Mario Bros., we have another picture that walks like the duck, talks like . . .

Afterword: Today, it seems, nothing dates faster than computer humour. The above review was written in what a tech-savvy friend calls the pliocene era of the Internet. It was supposed to reflect the computer experience of the day. It was a time of text-filled video-display terminal screens and the command-line interface. In 1993, the Internet was just four years old, and extracting information from computer files was a matter of asking precisely the right question in precisely the right way.
Super Mario Bros. was released to theatres just four months after Mosaic, the web browser credited with sparking the Internet boom of the 1990s, became available online. Mosaic offered a user-friendly graphical user interface (GUI), which made it possible for the more technophobic among us to join in the fun. (Command-line computing remains the province of elite users, including professional programmers, code writers, game creators and super-hacker Elliot Alderson on TV’s Mr. Robot.) The Netscape Navigator followed Mosaic into the market in 1994, with Internet Explorer (1995), Firefox and Safari (both 2003) coming along behind.
The Super Mario Bros. video game remains an historic success and is considered the best game franchise of all time. The movie, by contrast, was a spectacular failure. Directed by Rocky Morton and Annabel Jankel (the British husband and wife team who co-created the 1987 TV series Max Headroom), it cost Disney an estimated $48 million to make and made back just under $21 million. In a 2011 interview, Bob Hoskins said it was the worst film he ever made. And, yes, as is often the case with offbeat movie disasters, Super Mario Bros. today has its own cult following.