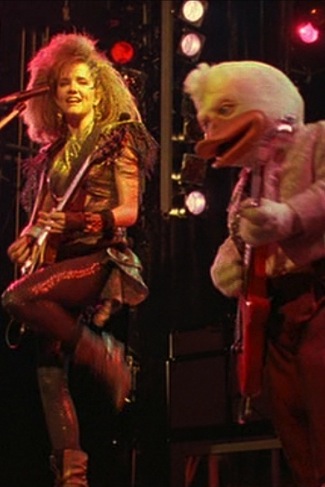 Beverly Switzler (Lea Thompson) rocks out with her alien waterfowl boyfriend in the 1986 comic-book adaptation Howard the Duck.


Willard Huyck made his name as a screenwriter, crafting stories for George Lucas and Steven Spielberg. Born on this day (September 8) in 1945, Huyck saw his own promising directorial career come to a spectacular end following the release of his comic-book-inspired Howard the Duck (1986).

Friday, August 1, 1986.
HOWARD THE  DUCK. Co-written and produced by Gloria Katz. Based upon on characters created by Steve Gerber. Music by John Barry. Co-written and directed by Willard Huyck. Running time: 110 minutes. Mature entertainment with the B.C Classifier's  warning: some violence and occasional suggestive  scenes. "I REMEMBER ONE TIME in the 1920s," director Howard Hawks reminisced to film historian Joseph (Hawks on Hawks) McBride. "Jack Ford and I were talking with some executive, and the executive said "Christ, Howard, how come you know so much about stories?"
"And Jack Ford said 'He reads books'."
I can imagine the same anecdote updated for the 1980s. Some executive is talking to Steve Spielberg and George Lucas. The executive says "Jeepers, George, where do you get all your ideas?"
Steve knows. "He reads comic books!"
Not just any comic books, mind you. In 1976, while his $10-million Star Wars feature was still before the cameras, Lucas was relaxing with Howard the Duck, a major milestone in commercial comic book wit and sophistication.
Working within the soul-shrivelling limitations of the Marvel Comic Group's house style, writer Steve Gerber had created a vehicle for his own serio-comic world view. Using the graphic arts medium, he parodied Marvel's shopworn superhero formulae while, at the same time, satirizing issues, individuals and events in the real world.
Lucas, an enthusiastic fan of master duckman Carl Barks (the artist and writer responsible for the best of the Donald Duck comic books), recognized Gerber's own iconoclastic brilliance. He pressed his find on his friends, Willard Huyck and Gloria Katz, the husband-and-wife screenwriting team who had collaborated with him on American Graffiti  (1973).
Lucas believed that Willie and Glo could turn Gerber's Howard into a screenplay and, with Willie in the director's chair, a feature film as fresh and funny as the 31-issue run of the duck's comic magazine (January, 1976, to May, 1979).
It might have worked out, too, if they had all gone to work on the project straight away.
Sadly, in the intervening years, they have become the sort of people that Gerber so savagely lampooned: the once-creative who've lost the ability to innovate and now cling to safe, familiar formulae.
Huyck's Howard the Duck (played by eight different duck-suited midgets and various puppets) is a lame attempt to wed Splash with Ghostbusters (both 1984). During the first half of the film, the alien waterfowl arrives in downtown Cleveland. He observes, is observed and finally is pursued by local authorities.
In the process, the duck becomes romantically involved with Beverly Switzler (Lea Thompson, best known for playing opposite a Fox in Back to the Future), and learns that laser-spectroscope researcher Dr. Walter Jenning (Jeffrey Jones) has been possessed by one of the demonic Dark Overloads of the Universe. With the Earth thus endangered, Huyck's movie shifts emphasis and becomes another Industrial Light and Magic special-effects show.
In creating Howard, Gerber was attempting to stretch the minds of Marvel's readers and introduce an element of genuine existential humour to the comics. Huyck, by contrast, is at pains never to strain the brains of the target audience members — sensation-seeking adolescents.
One way he plays to the teens is in his depiction of Beverly, here changed from an easy-going artist's model into an ambitious, aspiring pop singer in an all-girl rock band. Another is ignoring the fact that Gerber's villains had a satirical skew that made them hilarious, and featuring a climactic monster that is truly horrific.
Despite stray moments recalling Gerber's own duckworks — Crystal (Jorli McLain), the waitress at Joe Roma's Cajun Sushi bar, for example — Huyck's feature works to compromise the concept at every turn. Once a unique flight of pictorial-literary fantasy, Howard the Duck is here reduced to the dimensions of a very ordinary comic book.

Afterword: In the afterward to my review of producer George Lucas's 1994 feature Radioland Murders, I said that Lucas had remained remarkably loyal to Willard Huyck and Gloria Katz. He'd met the screenwriting partners when they were all film school students, and the couple wrote the screenplay for American Grafitti, his 1973 breakthrough hit. Huyck and Katz also wrote 1984's Indiana Jones and the Temple of Doom, the second Indiana Jones picture from producer Lucas and director Steven Spielberg. Between those two films, Huyck made his own directorial debut with the largely forgotten Gothic horror film Messiah of Evil (1973), a picture that he co-wrote and co-produced with his wife. In 1979, the couple continued their creative collaboration with French Postcards, a charming coming-of-age comedy filmed in Paris, followed by 1984's Best Defense, a charmless bomb that paired Eddie Murphy and Dudley Moore in parallel tales.
In an attempt to rescue his old friend's career, Lucas lent his name (as executive producer), to the Huyck-directed superhero satire Howard the Duck, the 1986 feature that became one of the most reviled movies of its decade, as well as a box-office failure. That experience notwithstanding, Lucas was on board again to produce their Radioland Murders screenplay. Although the film brimmed with period references and performer cameos, it failed to charm audiences and lost a great deal of money for Universal Studios. It would also be Huyck's last feature film credit. Willard Huyck celebrates his 70th birthday today (September 8, 2015) with his wife of 46 years, Gloria Katz.
A recent reassessment of Howard the Duck on the French-language website CineChronicle.com suggests that the movie may have been before its time. Citing the recent success of the comic-book-inspired Guardians of the Galaxy (2014), reviewer Arnold Petit calls for a  Howard remake "with the voice of Seth Green." Earlier, during an April appearance at New York's Tribeca Film Festival, George Lucas said that the 1986 film had become "a cult classic," and that "I have a feeling that Marvel's going to redo it . .  ."
We've been warned.

See also: Howard the Duck was still being published as a comic book when I included a prominent mention of it (and him) in my review of 1977's unintentionally funny Exorcist II: The Heretic.