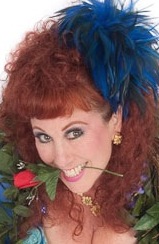 Not your old boys' club


A lot of porn-star-turned-post-feminist performance artist Annie Sprinkle was on view during the Pacific Cinémathèque's 1993 Ten Days of Female Misbehavior. Sprinkle, born on this day (July 23) in 1954, was director of The Sluts And Goddesses Video Workshop.

THE SLUTS AND GODDESSES VIDEO WORKSHOP; OR, HOW TO BE A SEX GODDESS IN 101 EASY STEPS. (Video; 1992). Written by Annie Sprinkle (Ellen Steinberg). Music by Pauline Oliveros. Produced and directed by Maria Beatty and Annie Sprinkle. Running time: 52 minutes.

FEMALE MISBEHAVIOR. Feature documentary consisting of four short subjects; produced and directed by Monika Treut. Running time: 80 minutes. OH, BOY. ABOUT A MINUTE into Monika Treut's feature Female Misbehavior, literary critic Camille Paglia tells us that "men can take me seriously as a sex object because I've got tits and ass."
Paglia, whose current celebrity is founded on her 1990 book Sexual Personae: Art and Decadence from Nefertiti to Emily Dickinson, comes on like Andrew Dice Clay's brainy big sister.
She came to prominence baiting orthodox feminists with her own telegenic brand of attack scholarship, an in-your-face selection of alternative insights delivered in the warp-speed speaking style of an angry New York cab driver.
An Italian-American, Paglia says that she is a "bisexual lesbian," insists that "intimacy kills sex," and tells us that "if people could see inside my brain, I'd be in prison."
Oh, boy. Previewing highlights of the Cinémathèque's Ten Days of Female Misbehavior event, I feel a lot like Quantum Leap's Sam Becket. Suddenly, we're not in Kansas anymore.
German filmmaker Treut's feature is actually a compilation of four documentary shorts. From Dr. Paglia, made in 1992, we leap to her 1983 interview with leather-clad Carol Macho, an advocate of Bondage.
Oh, boy. Ms Macho, a self-described "exhibitionist," tells us that "S&M is an art form." She is "into tit-torture" and offers a demonstration with the film-maker's clip-on microphone.
Leaping to 1992, Treut's Annie introduces us to Californian Ellen Steinberg, who became the 1980s X-rated film star Annie Sprinkle. Today [1993], she is "a post-feminist performance artist" famous for her "Public Cervix Announcement."
Oh, boy. Following her Bosom Ballet — "I'm into tit art" — Ms Sprinkle demonstrates the use of a gynecologist's speculum. She then invites her art gallery audience to view the inner Annie, an offer director Treut's camera accepts.
Cinémathèque flyers describe Female Misbehavior, the 10-day event opening today, as follows:
"A series celebrating female filmmaking beyond propriety and political correctness — the new, transgressive, post-feminist, post-ideological filmmaking that shatters taboos, questions orthodoxies and champions outre sexuality and women — post-porn stars and sex activists, female-to-male transsexuals, S&M queens, Camille Paglia — who, in the words of prominently featured filmmaker and provocateur Monika Treut, are doubly outlawed ‘not only by conventional society but also by mainstream feminism’.”
Oh, boy. The program, consisting of six features, two shorts and a video featurette, leaps into places mainstream males seldom, if ever, go.
Six screenings are scheduled for Ms Sprinkle's The Sluts and Goddesses Video Workshop; or, How to Be a Sex Goddess in 101 Easy Steps. A parody (I think) of home self-help tapes, it features Ms Sprinkle and 11 female "facilitators" demonstrating explicit techniques for enhancing self-esteem and sexual performance.
Not for the boys, the Female Misbehavior event is designed to bring Vancouver's outlaw women together for a little harmonic convergence.
If it weren't so darned sexist to say so, I'd call the event a girls' porno party.
For program details, call the Cinémathèque’s information line: 688-FILM.

Afterword: Change, when it comes, comes quickly. In 1975, the year that Annie Sprinkle made her adult film debut, X-rated films were not allowed in Canada. Vancouver filmgoers with an interest in the new “porno chic” had to cross the border to see her early screen performances at the SeaVue Theatre in Blaine, Washington. In 1978, the year Sprinkle first began to think of herself as an artist and teacher, pornography made its legal debut in B.C. with the screening of In the Realm of the Senses, a Japanese-language feature with explicit sex scenes. The Provincial Classifier had approved the film uncut for two film festival showings. In the years that Sprinkle was emerging as a safe-sex activist and conceptual artist, Vancouver was coming to terms with sexual diversity in the age of home video (a moment brilliantly captured in director Anne Wheeler’s 1999 feature comedy Better Than Chocolate).