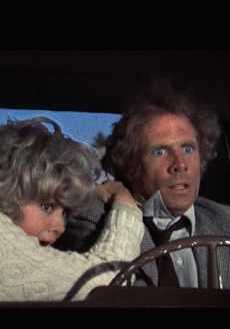 On a collision course


Couples sharing an heir of danger


Though he was known as “the master of suspense,” the introductions that Alfred Hitchcock shot for his 10-season television series showed him to be a king of comedy. Born on this day (August 13) in 1899, the director left movie audiences laughing with his final feature, 1976’s Family Plot.

FAMILY PLOT. Written by Ernest Lehman. Based on The Rainbird Pattern, a 1972 novel by Victor Canning. Music by John Williams. Directed by Alfred Hitchcock. Running time: 120 minutes. Mature entertainment. FOR A MOVIE REVIEWER, few things are more daunting than facing the work of a genuine master.
Directors with high-powered critical reputations are one thing. The conspicuously arty crowd — Kubrick, Fellini, Truffaut — all produce films so full of pomposity that they practically invite the wide-eyed spectator to shout “the emperor has no clothes.”
Masterworks are quite another matter. They come on like a force of nature — awesome in their simplicity and unyieldingly solid. They are produced by men like Alfred Hitchcock, directors who refuse to be fussed over.
“Hitchcock’s reputation,” says critic Andrew Sarris, “has suffered from the fact that he has given audiences more pleasure than is permissible for serious cinema. No one who is so entertaining could possibly seem profound to the intellectual puritans.”
There has never been much puritanism, intellectual or otherwise, in this corner. On the other hand, anybody with a bit of common sense can recognize what another master moviemaker, the late John Ford, used to call “a job of work.”
Such is Hitchcock's Family Plot, two hours of pure pleasure from the old pro. It begins with Blanche Tyler (Barbara Harris), a self-proclaimed medium, in communication with “the other side.”
Through a combination of trickery and deduction, Blanche has discovered that the aging Julia Rainbird (Cathleen Nesbitt) is suffering from belated guilt over turning out, some 40 years earlier, her late sister's illegitimate baby. Now she wants the family fortunes to be passed on to this unsuspecting heir, and she asks Blanche to use her psychic power to locate him.
With a $10,000 fee in the offing, Blanche turns the case over to amateur detective George Lumley (Bruce Dern), a cab driver and her lover. George has no illusions about pretty little Blanche’s powers. “Without my research, you’re about as psychic as a salami.”
Just as their story gets rolling, Hitchcock seems to lose interest. His camera focuses on George’s cab stopped at an intersection, catches sight of a tall blonde dressed in black, and follows her rather than the plotters.
Suddenly we’re smack in the middle of a kidnap drama. The blonde is really a dark-haired woman named Fran (Karen Black) and, together with her lover, an uptown jeweller named Arthur Adamson (William Devane), she has pulled off a daring international hostage exchange.
The ransom: an enormous diamond.
Effortlessly, Hitchcock involves us in a tale of two couples, one a pair of delightfully comic, rather unambitious con artists, the other a chillingly sinister team of dangerous high rollers. Inevitably, their fates will come together.
Years ago, in a comic book parody, Mad Magazine introduced its readers to director “Alfred Hatchplot.” The name was apt. A Hitchcock film is always an exercise in strong, flawless plotting, the result of the director’s exhaustive pre-planning.
In his recent films, Hitchcock has taken ever-increasing delight in comic moments. Here he is constantly on the move between light and dark scenes, blending them together more and more as the two stories join.
In one such scene, his comic couple fall victim to a would-be murderer. The brakes on George's car fail on a mountainous downgrade, and the results are both heart-stopping and hilarious.
The mood shifts are made possible by a razor-sharp cast, as well as a top director. It’s fascinating to see just who Hitchcock includes among his players.
Bruce Dern, 39, has been around about as long as Jack Nicholson. A twitchy sort, he is usually cast as a psychopath, and he has the distinction of having killed the character played by John Wayne in Mark Rydell's 1972 film The Cowboys.
Producer-director Roger Corman, who used both Dern and Nicholson in his early drive-in epics, once said that it would be a tossup which of the two actors got the “big break” first. Nicholson won the toss.
Barbara Harris, 40, hasn't made as many movies as Dern but is always a standout when she does appear on screen. Last year [1975], Robert Altman gave her the final word in his totally brilliant Nashville.  She played Albuquerque, the runaway wife who gets her “big break” at the end of the picture’s political rally.
Both Dern and Harris have, for a long while, deserved a breakout moment in their own acting careers. In Family Plot, Hitchcock gives one to each of them, and both respond with solid, award-worthy performances.
Their collaboration is a big break for audiences, too. The master of suspense has lost none of his drive and power despite the fact that this is, after all, a comedy thriller. Upbeat and, in a delightfully evil way, uplifting, Family Plot is the kind of masterpiece that it is a pleasure to praise.

Afterword: In a 1960 essay called “Why I Am Afraid of the Dark,” published in the French literary journal Arts: lettres, spectacles, musique, Alfred Hitchcock wrote that “For me, suspense doesn't have any value if it's not balanced by humour." Film scholars agree that the droll wit he displayed introducing his television anthology shows — Alfred Hitchcock Presents (1955-1962); The Alfred Hitchcock Hour (1962-1965) — was evident throughout his film career. He is remembered, of course, for holding audiences in his grip as they endured the delicious anticipation of the unexpected built into such classic features as 1945’s Spellbound, with its surreal dream sequence designed by Salvador Dali, 1954’s Dial M for Murder, among the best 3D films ever made, and 1960’s Psycho, the picture that changed horror movies forever.
During a half-century career, the prolific Hitchcock directed 54 features, of which just seven were actually marketed as comedies. Two of those, The Farmer’s Wife and Champagne (both 1928) were silent films. With the coming of sound, his special talent for thrillers blossomed. Only his most ardent fans remember his rare comedies, a short list that includes 1930’s The Shame of Mary Boyle (Hitchcock’s adaptation of Sean O’Casey’s stage play Juno and the Paycock), East of Shanghai (1931), Mr. & Mrs. Smith (1941) and 1955’s delightfully quirky The Trouble with Harry. Though we didn’t know it at the time, Family Plot was the suspense master’s last feature film. Alfred Hitchcock exited laughing.