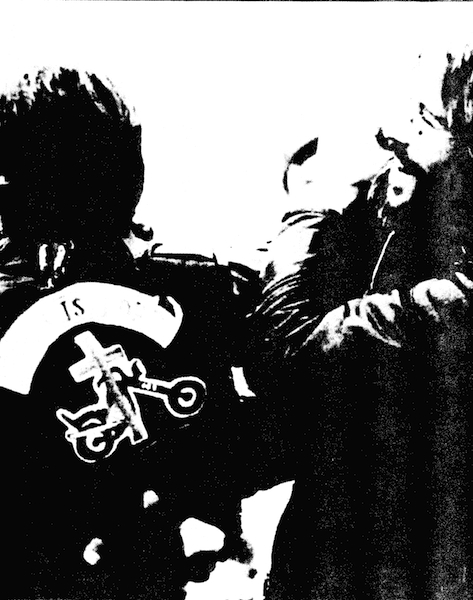 On a highway to heaven


On this day (August 28) in 2003, an estimated 250,000 motorcycle enthusiasts gathered in Milwaukee for a three-day celebration marking the 100th anniversary of Harley-Davidson. Among them were adherents of a faith documented in director Stavros Stavrides’s 1988 feature God Rides a Harley.

GOD RIDES A HARLEY. Written by Michael Wainwright and Spencer Frazer. Music by Carlos Lopez, Adam Mason, Ben McPeek, Jerome McPeek and Don Baird. Produced and directed by Stavros C. Stavrides. Running time: 81 minutes.
TWENTY YEARS AGO, BIKERS were baaad.
In the real world, outlaw motorcycle gangs had names like Hell's Angels,  Lucifer's Legions and Satan’s Choice.
On screen, 1953’s The Wild One spawned Wild Angels (1966), Devil’s Angels (1967), Hell’s Belles and Satan’s Sadists (both 1969). The image was violent, mean, dirty and irreverent.
Today [1988], Satan can no longer claim an exclusive hold on rider loyalties. According to documentarist Stavros C. Stavrides, God Rides a Harley.
“Jesus is Lord,” reads the motto on the colours of the Ontario-based Christian Riders Motorcycle Club. “Ye must he born again.”
To take the measure of those born-again bikers, Stavrides joined them on runs, sat in on a chapter meeting, attended a cycle trade show and the Riders Christmas dinner at the local Holiday Inn.
Punctuating his Genie Award-winning film are interviews with five former outlaw riders.
“I was into weapons,” says John.
“I used to be very violent,” confesses Rocky.
“God sent his Death Angel,” insists Les.
“(Our) purpose,” says Christian Riders chapter president Bob McColgan, “is to minister to others who might not otherwise hear the message." God, as the faithful say, moves in mysterious ways.
Filmmakers, by contrast, can be disappointingly predictable. Stavrides, in approaching the idea of biker fundamentalism, uses the unquestioning (if popular) technique of setting his camera down and accepting everything that happens before it at face value.
As a result, his documentary develops a mood rather than a context. God Rides a Harley listens sympathetically instead of analytically, resulting in a film that is approving rather than incisive.

Afterword: Toronto-based Stavros Stavrides made his theatrical feature debut as a director with the 1988 documentary God Rides a Harley. He then turned his hand to producing independent fictional features, among them first-time feature director Darrell Wasyk’s harrowing drug-addiction drama, 1990’s H. Stavrides worked with such directors as Antonio Tibaldi (On My Own; 1991), Jon Pozner (The Michelle Apartments; 1995), Michael Kennedy (Joe’s Wedding; 1996) and Jerry Ciccoritti (Boy Meets Girl; 1998), before resuming his own directorial career. Since 2002, he’s worked in television, earning credits directing episodes of documentary and dramatic series. Stavrides returned with a celebration of his Greek roots called Century Man: The Father Nicholas Salamis Story, (2002). It was part of the four-season A Scattering of Seeds (1998-2002), a History Channel series that focused on the Canadian immigrant experience.