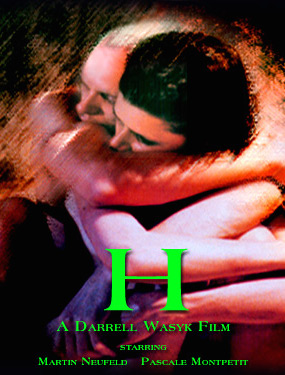 Climbing off the horse


Before there was fentanyl, the opioid at the centre of the current drug crisis, there was heroin. Actress Pascale Montpetit, who was born on this day (July 28) in 1961, made her big screen debut playing a woman battling addiction in director Darrell Wasyk’s 1990 drama H.

H. Music by Rob Carrol. Co-produced, written and directed by Darrell Wasyk. Running time: 96 minutes. Restricted entertainment with the B.C. Classifier’s warning "some nudity, suggestive scenes and coarse language." H CONTROLS THE I.
"I can't imagine living without junk," says Michele (Pascale Montpetit), a heroin addict.
H destroys the I.
"I just want to be normal," says her boyfriend, the luridly tattooed Snake (Martin Neufeld). "I don't want to be fish-dead."
H turns the I inward.
"I don't want to die," Michele pleads. "I just want the pain to stop."
"I want to make love to her," Snake tells his drug-wasted self.
"I can't. I just physically can't do it!"
H, Toronto writer-director Darrell Wasyk's harrowing, low-budget look at drug withdrawal, is not easy to watch. A tragedy of lives bounded by "I want" and "I can't," its action is confined to the unfinished basement apartment where bicycle courier Snake decides that "I'm tired of this garbage lifestyle."
Determined to kick the habit cold turkey, he boards up the windows and door and flushes their needles down the toilet. His waitress girlfriend wakes up to discover that she must suffer along with him.
An intense, dramatically daring first feature, Wasyk's H uses its dungeon-like set to reflect the tragedy of self-imprisoned lives. Actors Neufeld and Montpetit are uncomfortably convincing in their roles.
H offers an uncompromisingly raw slice of life while demonstrating that Canada, too, has its needle parks.

Afterword: Shot in Toronto, H was Montreal stage and television player Pascale Montpetit’s first feature film credit. Her unsparing performance earned her the 1991 Genie award for best actress. Shortly afterwards she made the acquaintance of director Charles Binamé, described as “an artistic soulmate” in her Wikipedia biography.