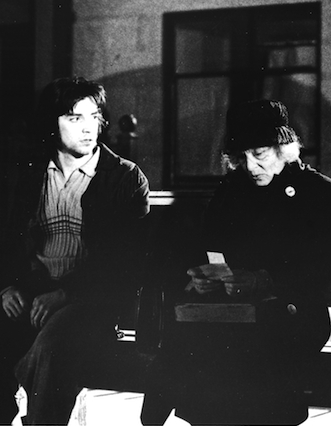 On the road with granny


For Viveca Lindfors, the results of a working visit to Vancouver included one broken wrist and a Genie Award nomination. Born on this day (December 29) in 1920, the veteran performer was near the end of her 55-year career when she starred in director Richard Martin’s 1992 North of Pittsburgh.

NORTH OF PITTSBURGH. Written by Jeff Schultz. Music by Graeme Coleman. Directed by Richard Martin. Running time: 98 minutes. Rated Mature with the B.C. Classifier’s warning: some very coarse language, occasional violence. WHAT DEVILTRY IS THIS?
Goin' down the road to Detroit, wayward Canadian Tony Andretti's blue beater breaks down. On the odometer is the reading 666666.
Tony (Jeff Schultz) ignores the ominous number. In director Richard Martin's downbeat North of Pittsburgh, he's got enough to worry about without Old Nick.
For one thing, Tony has the misfortune to be 22 in 1975. For another, he's living a dead-end life of cheap thrills and petty crime in Sault Ste. Marie, Ontario.
The sixties are over and, for a screw-up like Tony, Happy Days is a TV show. In debt $8,000 to a murderous dope dealer, he's driving his widowed grandmother Rosa (Viveca Lindfors) to see their American cousins.
Left penniless by her husband, retired coal miner Guiseppe (Robert Clothier), Rosa intends to claim compensation from a fund for black-lung disease victims. To do so, she needs proof that Guiseppe worked in the colliery.
A trunk stored with her sister Louisa in Detroit may contain Guiseppe's employment records. Failing that, she'll go on to the mining conglomerate's Pittsburgh headquarters.
Tony's motives are more mixed. On his deathbed, Nonno Guiseppe insisted that Tony stay with his grandmother until she was all right.
He's also running for his life. He hopes to beg, borrow or even steal enough of her comp money to pay off the bad guys.
Mostly filmed around Vancouver and Seattle, director Martin's feature was written by Victoria-born actor Schultz. Gritty in the Eastern Canadian style, its cross-generational theme is both more ambitious and better realized than the aimless self-indulgence of such recent Ontario-made road epics as 1991's Highway 61.
An episodic "travels with my granny," it benefits from the cool professionalism of actress Lindfors, solid and dignified as an indomitable widow determined to see justice done.
Along the way, Schultz's desperate, less-than-likeable Tony meets a selection of family members, all of them coping as best they can with the difficulties life has dealt them. Tony does his best to resist the obvious, if subtle, lesson.
As in his previous picture, the mystery-thriller Matinee, Martin shows a keen interest in relationships. In North of Pittsburgh, his cast provides him with strong, authentic performances throughout.

Afterword: “There are not a great deal of parts written for older women,” Viveca Lindfors told an interviewer during the shooting of 1992's North of Pittsburgh. “And very often the characters end up meek, and I think that is a misconception. If you survive this long, it’s because you’ve got some guts and you might as well show it.” A Swedish screen star from the 1940s, Lindfors followed the example of her countrywomen Greta Garbo and Ingrid Bergman. In 1946, she relocated to Hollywood. Never known as meek, she made her first major impact starring opposite Errol Flynn in 1948’s The Adventures of Don Juan. “I was wild. I was ahead of my time in feeling sexual liberation," she told the Los Angeles Times in a 1975 interview. "I married my first husband [in 1941] because the gossips said no man would ever want to marry anyone as promiscuous as I was."
In a year that has seen the emergence of an assertive new women’s movement, it’s worth remembering performers such as Lindfors. An actress who specialized in playing strong women — she starred as Anastasia in the 1954 Broadway drama, a part later played by Ingrid Bergman in the 1956 movie —  Lindfors is celebrated for living life on her own terms. Interviewed on her 53rd birthday, she said "Any qualms I might have had about advancing years were dispelled a long time ago when I decided not to be put down by America's worship of youth.” Married and divorced four times, she remained single for the last 25 years of her life.
At 53, she went on the road with her feminist one-woman show, I Am a Woman. "It is an ancient struggle to be who you are, to feel the right to be who you are,” she said during a Q&A following a 1976 performance in Boston. “Everyone feels more comfortable when there are no games . . . people are much stronger than they think." Despite having co-starred with Ronald Reagan (in 1949’s Night Unto Night), she was a liberal Democrat who supported Jimmy Carter in the 1980 presidential election.