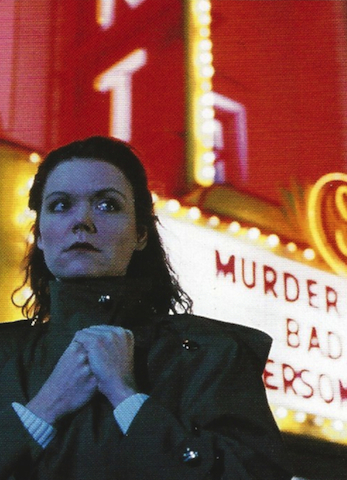 
University of B.C. graduate Richard Martin’s career successfully combines his talents for media art, cinematic crafts and entertainment filmmaking. Born on this day (April 12) in 1956, Martin made his feature directorial debut with the 1989 movie-house thriller Matinee.

MATINEE. Music by Graeme Coleman. Written and directed by Richard Martin. Running time: 93 minutes. Rated 14 Years Limited Admission with the B.C. Classifier's warning: some violence, very coarse language, occasional nudity and suggestive scenes.
SHERRI WILLIAMS (BEATRICE BOEPPLE) doesn't mean to hurt her mom. She knows that, since the divorce, Marilyn Williams (Gillian Barber) has worked hard for her daughters.
It's early morning, though, and tempers are frayed. The 18-year old spent the night with her wild boyfriend and is not at all sorry.
"Look," Sherri says, "if I don't take the chance, I'll end up as lonely and frustrated as . . ."
In Matinee, writer-director Richard Martin's teen-oriented shock thriller, the sentence is left incomplete. The theme of frustration, though, lies at the heart of the Matinee project.
A professional film editor, Martin had hoped that his directorial debut feature would be a children's drama. Finding financial backers for such a picture was another matter.
By contrast, Martin could see an ever-ready market for "typically gory teen horror flicks." The University of B.C. grad made up his mind to "do a commercial picture that will establish me as a director and give me credibility to go on and make the films that I want to direct."
Frustration, it turns out, is a constant in the lives of Matinee's major characters. Abandoned by her husband years earlier, Marilyn Williams is an angry, withdrawn woman.
Sherri and her beau Lawrence Shaw (Jeff Schultz) feel stifled in the repressed society of Holsten, B.C., "The Pride of the Valley."
Even Sherri's supposedly successful father, horror film director Heath Harris (William B. Davis), is trapped in the B-movie ghetto, making Roman-numeral remakes of his "breakthrough" feature.
Martin's movie opens with a murder in the back row of Holsten's Paramount Theatre during the showing of a "typical" slasher opus. Two years later, with the case still unsolved, theatre manager Earle Gardner (Don S. Davis) stirs up the nasty memory by scheduling a second Halloween Horror Film Festival.
Protest letters start piling up on the desk of the town's new chief detective, Al Jason (Ron White). A former big-city cop frustrated by police corruption, Jason has retreated to the Valley in an attempt to stay clean.
A typewritten note warns Jason that "it" — violent death — will happen again. And, of course, it does.
Frustration awaits Martin's target audience, the teen gore freaks. As his web of complications develops, it becomes obvious that he is more interested in character relationships than a body count, or outré splatter effects.
Staid by shocker standards, low-key and downbeat, Martin's Matinee remains an effective suspense drama. No hell-bent-for-horror show, it provides its maker with a competent, attractive calling card.
* * *
ON LOCATION: Holsten's Paramount Theatre is actually a movie editor's amalgam of four local movie houses. The exterior is the Paramount in Chilliwack, the Fraser Valley city that "plays" rural Holsten. Interiors were shot variously in Vancouver's Ridge and Vogue Theatres and in the New Westminster Paramount Theatre.

Afterword: Ignoring the fact that the title was already taken, Universal Pictures released its own feature called Matinee in 1993. Director Joe Dante’s tribute to gimmick moviemaker William Castle, it was a big hit, and Richard Martin’s earlier film was retitled Midnight Matinee during its afterlife on television and home video. The eldest son of American TV comic Dick Martin, Richard earned his first screen credits as a film editor. He was part of the team that cut director Bill Forsyth’s 1987 Hollywood studio feature Housekeeping, and was nominated for 1986’s best editor Genie for his work on Laurence Keane’s independent historical drama Samuel Lount.
After Matinee, Martin directed three more features before finally making a kids’ picture. Air Bud: Golden Receiver (1998), the second entry in Walt Disney Pictures' canine sports star franchise, was declared “a fine sequel” by New York Times critic Anita Gates. Based in Vancouver, Martin mixes editing and directing assignments, working in television and on theatrical features. Originally attracted to the creative possibilities of film by the work of B.C. artist David Rimmer, Martin pursues a parallel career as a screen media innovator and film scholar. Personal films, including 1980’s Diminished and 2013’s Backbone: Vancouver Experimental Cinema 1967-1981, have made him a significant presence within the cinematic arts community. Richard Martin turns 61 today (April 12).