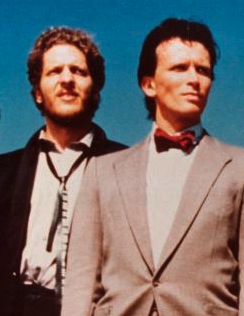 One for Team Banzai


He's tried to be good. Character actor Clancy Brown, who celebrates his 55th birthday today (Jan. 5), is by all accounts a really nice guy. Looking back on his career so far, though, the Ohio-born actor is best known as a heavy. He made his screen debut menacing Sean Penn (in 1983's Bad Boys), going on to play Frankenstein's male monster Viktor (in 1985's The Bride) and Kurgan, the immortal villain who lops off Sean Connery's head in Highlander (1986). Granted, as part of the ensemble cast of the single-season TV series Earth 2 (1994-95), he did play a dad devoted to his daughter. As Sgt. Zim (in 1997's Starship Troopers, he actually ended up a hero. The son of a U.S. Congressman, Brown inherited the kind of voice that translated into a parallel career as a voice actor for animated features and video games. Many, though, remember him most fondly for his second feature film role. As Rawhide, he was the piano-playing member of The Hong Kong Cavaliers in 1984's The Adventures of Buckaroo Banzai Across the 8th Dimension. I wonder how his career might have evolved if that film had been a financial success and produced its promised sequel, Buckaroo Banzai Versus The World Crime League.

August 15, 1984
THE ADVENTURES OF BUCKAROO BANZAI ACROSS THE 8th DIMENSION. Written by Earl Mac Rauch. Music by Michael Boddicker. Directed by W.D. Richter. Running time: 105 minutes. Mature entertainment  with the B. C. Classifier's warning: occasional violence, coarse language and swearing. AN ALIEN WHO ONCE answered to the name John Belushi lies dead in the night-darkened forest. Burt (Kenneth Magee) and Bubba (James Keane), duck hunters who've bagged more than they bargained for, approach the body with a mixture of fear and fascination.
What's that in the grass by the corpse? A comic book? "The Adventures of Buckaroo Banzai," says Bubba. "The latest issue."
Holy pulp press, Batman! Far-out fantasy fans are in for a treat. At long last, a movie with an answer to the question: "what really happened at Grovers Mill, New Jersey, on October 30, 1938?"
It is Dr. Sidney Zwibell (Jeff Goldblum) who first makes the connection. The newest member of Team Banzai, the eminent brain surgeon supplies a vital clue to the origin of a menace that threatens the entire Earth.
The villain behind it all is evil John Whorfin, a.k.a. Dr. Emilio Lizardo (John Lithgow), one of the screen's all-time great mad scientists.
Our hero is Japanese-American rock musician Buckaroo Banzai (Peter Weller). He's also an independently wealthy adventurer, whose pop group, The Hong Kong Cavaliers, doubles as Team Banzai, a collection of the finest scientific minds alive.
They all come together in a movie that is a self-confident cross between the Doc Savage novels and TV's Hitchhiker's Guide to the Galaxy. An aggressively weird concept, the film has been thoroughly thought through and is completely secure in its own wry world view.
Whether or not there is an audience for its kind of  deadpan, off-handed action comedy is another matter. Designed as the first of a series, it is a daring, delightfully individualistic directorial debut from former screenwriter W.D. Richter.
Here, working from a screenplay crafted by fellow Texan Earl Mac Rauch, Richter has produced a picture that genuinely deserves the cult following that it will almost certainly win.
Different without being deviant, Buckaroo Banzai is the new good guy for the 1980s.

Afterword: As it turned out, actor Peter Weller did not go on to further adventures as 1980s good guy Buckaroo Banzai. Instead, he made his mark as "the future of law enforcement" in director Paul Verhoeven's RoboCop (1987). I was right about the cult thing, though. CBC Vancouver program host Stephen Quinn clearly believed the picture was something special on that April 2013 night that he appeared in costume (as New Jersey) on the Rio Theatre stage to introduce a screening. The broadcast journalist, together with his audience, understood that a dimension-bending oscillation overthruster should never be confused with a flux capacitor (which wouldn't be invented until 1985, and is used for time travel).