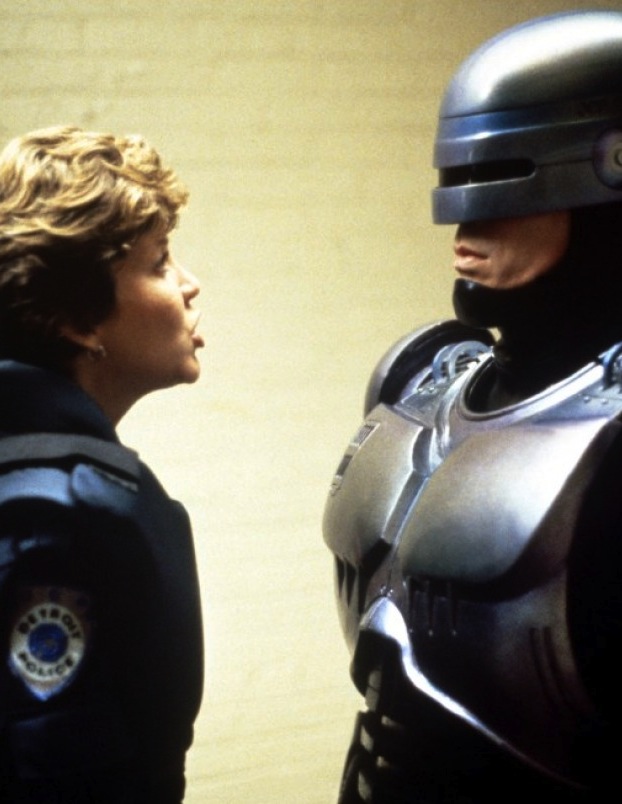 
I'm torn. Among my personal rules of film criticism is "don't prejudge," which means considering every film worth seeing until it proves otherwise on the screen. That said, I'm inclined to hate the new RoboCop remake, opening today (Feb. 12) in the U.S. and Canada (at least a week after its release in most foreign markets), because the first version was just so good. Director Paul Verhoeven's 1987 original was a landmark feature, a science-fiction classic that remains one of my all-time favourite movies. On the other hand, I also really want to love the new picture, because it was filmed in Canada and features some fine people in its cast. Although the setting is still a bankrupt Detroit — a prescient fiction in the first version, a fact today — the location work was done in this country's former "Steeltown," Hamilton, Ontario, as well as in Toronto and, briefly, Vancouver. And then, my mood swings back to hate upon learning that RoboCop Alex Murphy's partner, Officer Lewis, has undergone a sex change operation, morphing from Anne (Nancy Allen in the original) to Jack (Michael K. Williams). Suddenly gone is all the good will I felt for the new Murphy, actor Joel Kinnaman, who stars in the made-in-Vancouver TV cop show, The Killing, currently filming its fourth (and final) season.

Tuesday, July 21, 1987
ROBOCOP. Written by Edward Neumeier and Michael Miner. Music by Basil Poledouris. Directed by Paul Verhoeven. Running time: 101 minutes. Restricted entertainment with the B.C. Classifier's warning: frequent gory violence. "MURPHY?"  THE FLESH and metal thing pauses at the sound of Officer Lewis's voice.
But it can't be Alex Murphy (Peter Weller). Anne Lewis (Nancy Allen) knows that, because she saw her partner killed in Old Detroit. Stamped on his service record is the word "deceased."
Still, there is something in the cyborg's manner, something familiar about the mouth. Who is this RoboCop?
"He doesn't have a name,'' insists Security Concepts executive Bob Morton (Miguel Ferrer). "He has a program. He's a product."
Did someone say "megahit''? Though it's always folly to predict box office performance, for me RoboCop is the first genuine hit of the summer, a major movie that is neither a sequel nor a disappointment. Combining a science-fictional premise with some superb contemporary comic-art ideas, director Paul Verhoeven has come up with a gritty, original action fantasy with considerable satiric depth.
The setting is a near-future America, sometime after Axel Foley's Beverly Hills expense accounts finally bankrupt the Detroit Police Department. Security Concepts, a division of OmniConsumer Products, "manages" the city's blue knights.
The street battles have nothing on the battles in the boardroom, as corporate climber Bob Morton attempts an end run on the power of OCP's sinister president, Dick Jones (Ronny Cox). Morton sees his chance when Jones's own project, the all-mechanical ED (for "Enforcement Droid") 209 fatally malfunctions during a demonstration.
Officer Murphy's death in the line of duty gives Morton the organic material his team needs to produce its own cybernetic "RoboCop.'' The young administrator's corporate star rises when his creation goes into action.
A superman who's no strange visitor from another planet, the thing takes to the streets to fulfill his prime directives: 1. Serve the public trust; 2. Protect the innocent; 3. Uphold the law.
Not since Dirty Harry has the screen seen a more tenaciously dedicated defender of law and order. Within his machine mind, though, there is a man struggling to find his lost memories. Within the corporation, there is a nasty secret waiting to he found.
No stranger to local film-goers, Paul Verhoeven is a Dutch director with an an international reputation. We've seen him work in a variety of moods, including the bizarre (1973's Turkish Delight), the baroque (Keetje Tippel, 1975), the rousing (Soldier of Orange, 1977) and the mystic (The Fourth Man, 1983).
A distinctive, mature talent, he makes his Hollywood debut with an ultra-violent urban fantasy. With the instinct that served him so well in the past, he has chosen a science-fictional vehicle that speaks to some major issues in American life today.
Under Verhoeven's direction (and 12 kg of Rob Bottin's make-up), actor Weller gives a performance that is touching and funny as well as heroically satisfying. Their RoboCop offers first-class action entertainment with a solid something extra.

Afterword: Not all popular culture references survive the test of time. "Axel Foley's Beverly Hills expense accounts" made sense in 1987, the year that Eddie Murphy's Beverly Hills Cop II was the No.3 top-grossing film (making approximately three times more money than the 16th-place RoboCop). Even more obscure is the reference to "superb comic-art ideas," meant to recall comics genius Howard Chaykin's 1983 creation American Flagg. Paul Verhoeven's screen hit generated two sequels (RoboCop 2, 1990;  RoboCop 3, 1993) directed by others, as well as a single-season TV series (1994) and a TV mini-series (2000). The move to TV included a move to Toronto, which also served as the shooting location for the current feature remake (or, as they insist on saying in the 21st century, the RoboCop reboot). Verhoeven went on to delight (and outrage) science-fiction fans with his singularly personal adaptations of novels by genre icons Philip K. Dick (Total Recall, 1990) and Robert A. Heinlein (Starship Troopers, 1997). Verhoeven, and by extension his RoboCop concept did not lack for fierce social commentary. Though not marketed as serious cinema in the manner of a Godard or Fellini film, RoboCop had things to say about American mass culture, labour relations, the growing wealth gap, the military-industrial complex, consumerism and the inherent dangers of corporate rule, ideas that were unexpectedly thoughtful and disturbingly prescient. In the end, the RoboCop reconnects with his humanity as Alex Murphy and, with new understanding of the true nature of the OmniConsumer organization, stands on the brink of revolution. It could be argued that Verhoeven created a dangerous vision, one that might have been interpreted as a call to action, with RoboCop/Murphy as a potential American Che Guevara. Fortunately, sequels were made that reinforced the status quo, reinventing the character as a comic-book action figure — comic-book writer Frank Miller is credited with the story and screenplay for RoboCop 2 — and reducing his self-awareness to that of an unquestioning enforcer in the war on drugs.