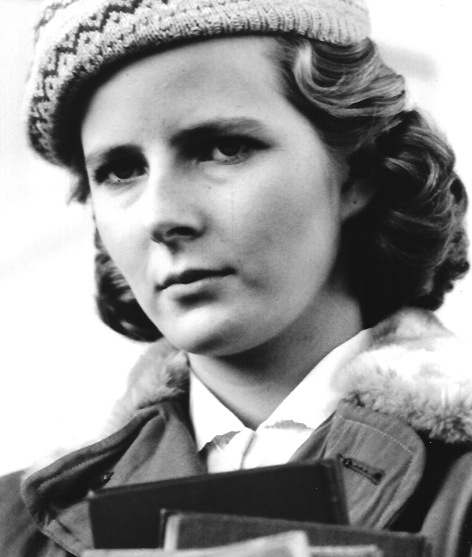 One from the Heart


Born in Toronto on this day (September 20) in 1968, Leah Pinsent followed her famous parents into the acting business in 1984. Under Daniel Petrie's direction, she played the Nova Scotia teen beauty who stirs the heart and troubles the soul of The Bay Boy.

Wednesday, September 26, 1984.
THE BAY BOY. Music by Claude Bolling. Written and directed by Daniel Petrie. Running time: 104 minutes. 14 Years Limited Admittance with the B.C. Classifier's warning: occasional nudity, suggestive scenes, very coarse language and violence. JENNY CAMPBELL (LIV Ullmann) believes that her youngest son, Donald (Kiefer Sutherland), has a vocation to the priesthood. Donald, The Bay Boy, is not so sure.
Outwardly devout, he attends Glace Bay's Catholic high school, and serves mass for Father McKinnon (Thomas Peacocke) at the parish church. Even so, his feelings for God are nothing like the stirrings he experiences in the presence of Saxon Coldwell (Leah Pinsent, the daughter of actors Gordon and his wife Charmion King), the dimpled daughter of the local police sergeant (Alan Scarfe).
The time is 1937. For Donald, 16, coming of age in a Nova Scotia mining town is complicated not only by a crisis of faith but by an unexpected meeting with a murderer.
Filmed on location last November, The Bay Boy was a nostalgic homecoming for Nova Scotian Daniel Petrie, 63. A filmmaker who maintains close ties with academia (currently serving on the faculty of the American Film Institute), he is best known for such issue-oriented Hollywood dramas as Buster and Billie (1974), Resurrection (1979) and Fort Apache, The Bronx (1981).
At their best, Petrie's pictures reflect a yearning for an order and humanity that effectively prevails over the forces of cynicism and despair. Here, drawing upon the recollections of his own youth, the writer-director is at his best and the result is the finest English-Canadian feature film since 1982's The Grey Fox.
This is a drama that conveys not only a sense of time and place but of community. Like Bruce Beresford in Tender Mercies (1983), Petrie involves us in the lives of his characters and their ethical dilemmas.
The film's central focus is on the last surviving son of hard-working Fred (Peter Donat) and Jenny Campbell. As played by Sutherland (son of actors Donald and his first wife Shirley Douglas), Donald Campbell is a bright, likeable teenager who is attempting to balance an innate sense of responsibility with his own emerging needs and desires.
True to the young man's state of mind, Petrie shows us a world in which a first kiss is a more intense and significant experience than the death of a sickly sibling. Warm, and just a bit wistful, The Bay Boy is definitely one from the heart.

Afterword: A family film in every sense of the term, The Bay Boy was the screen debut of Gordon Pinsent's daughter Leah, a role that earned her a Genie award nomination for best supporting actress. It was the first starring role for Donald Sutherland's son Kiefer, who had made his own big screen debut a year earlier as a schoolyard bully in Max Dugan Returns (a picture that starred his dad). The two would be reunited in "New Office," a 1999 episode of the  CBC-TV comedy series The Industry, in which Pinsent was a regular and Sutherland a guest star. Filmmaking, as it turned out, was also a Petrie family business. After 1999, Daniel Petrie's screen credits read "Daniel Petrie Sr.," in recognition of the fact that his eldest son, Daniel Jr., had become an Oscar-nominated screenwriter — for 1985's Beverly Hills Cop — as well as a producer/director in his own right. His second son, Donald Petrie, has made his own name in the industry as an actor and the director of such films as 1988's Mystic Pizza and Miss Congeniality (2000).