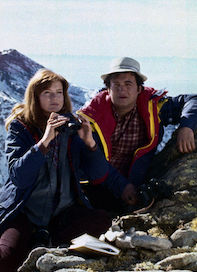 
Not the oddness we were expecting


For a time, he epitomized the Boomer generation’s chaotic idea of what it was to be funny. Born on this day (January 24) in 1949, John Belushi made only five feature films, among them director Michael Apted’s 1981 romantic comedy Continental Divide.

CONTINENTAL DIVIDE. Written by Lawrence Kasdan, Music by Michael Small. Directed by Michael Apted. Running time: 103 minutes.  Rated Mature with the B.C. Classifier’s warning: "some coarse language and swearing, occasional suggestive scenes.” THEY'RE UNLIKELY AS FRIENDS, less likely as lovers. He is big city — a brash, self-mocking crusading reporter. She's the wide open spaces, a reclusive, intense and serious-minded scientist.
There's something classic to the shape of their story, a Lawrence Kasdan screenplay called Continental Divide. Kasdan, whose previous credits include The Empire Strikes Back, Raiders of the Lost Ark and Body Heat, has been accused of recycling some of Hollywood's more time-honoured formulae.
In Continental Divide he pleads guilty to all charges, paying tribute to romantic comedies such as It Happened One Night, the 1934 multiple Oscar-winner. His fondly conceived screenplay takes delight in nostalgic recollections of train travel, front-page journalism and the idea of marriage as the ultimate expression of love.
It is the story of Chicago Sun-Times columnist Ernie Souchak (John Belushi), who is ordered to get out of town by his concerned managing editor when his hard-hitting attacks on a crooked alderman named Yablonowitz (Val Avery) put his life in danger.
Reluctantly, he accepts a trip to Wyoming to interview the reclusive Nell Porter (Blair Brown), a publicity-shy ornithologist who sits atop a remote mountain studying eagles.
Written in 1977, Kasdan’s script sat on Universal's shelf until last year [1980], when the studio turned it over to British-born Michael Apted. A TV-trained director, Apted was fresh from his triumph with Coal Miner's Daughter [1980], an assignment he got after the studio folk saw his 1974 English feature Stardust, a musical biography loosely based on John Lennon’s life story.
Apted’s previous "odd couple" movie was 1979’s Agatha, a bit of speculative
fiction inspired by an actual incident in the life of mystery writer Agatha Christie. In it, Dustin Hoffman played an American journalist who has a brief liaison with Vanessa Redgrave's suicide-prone Christie, certainly one of the screen's least-likely romantic combinations.
The casting of Belushi and Brown for Continental Divide is a whole other order of oddness. Listening to Kasdan's crisp, polished repartee, I would swear that he wrote Ernie Souchak with Burt Reynolds in mind. It's not hard to picture spunky Sally Field in the nature-girl role.
Belushi’s Souchak, by contrast, is an uneasy cross between Edward G. Robinson and Walter Matthau. Even if we could believe him as a tough-guy newsman, he falls way short in the sensitive soft-centre department, the essential ingredient for true 1930s-style lovability.
Brown, last seen as John Hurt's devoted wife in 1980’s Altered States, has no trouble playing a beauty with brains, but her inborn preppy manner is a bit much in the wilderness. Their scenes together fail to generate sparks and, as a result, their differences-bridging love just doesn't work.
Like many of his countrymen, Apted is a directorial journeyman, a filmmaker who can be trusted to turn out a competent product. Forgive him if his pictures lack much sparkle or imagination. Though positive and occasionally pretty, Apted's vision is essentially bland.

Afterword: I’m not sure which is the greater paradox: that a comedian as manic as John Belushi was cast to play an investigative reporter, or that the most famous biography of him — 1984’s Wired: The Short Life and Fast Times of John Belushi — was the work of the era’s most famous investigative reporter, Bob Woodward. Belushi’s close friend Dan Aykroyd and his widow Judith both hated it. Despite the controversial reception (or maybe because of it), the book inspired director Larry Peerce to make the 1989 biographical fantasy Wired. Michael Chiklis played Belushi in that much-reviled picture. In it, the late performer’s ghost reviews moments from a life that includes an attempt to get off drugs during the filming of Continental Divide.
What stands out for me in his story are the many Canadian connections. The Chicago-born Belushi was present at the creation of Boomer-generation comedy. He joined the Windy City’s Second City troupe in 1971. A year later, he was off to New York, where he was part of the ensemble that mounted an off-Broadway parody of Woodstock, The National Lampoon’s Lemmings. In 1974, he went on tour with The National Lampoon Show, produced by Toronto-born film director Ivan Reitman.
Often noted is the fact that Belushi was one of the seven original cast members when television’s Saturday Night Live went on the air in 1975. (In 2015, Rolling Stone declared him the greatest of all of SNL’s 145 cast members to date.) He was hired by the sketch show’s creator, Toronto-born CBC Radio alum Lorne Michaels.
Belushi made his feature film debut playing “Bluto” Blutarsky, the hardest-partying Delta Tau Chi frat member in 1978’s Animal House. A National Lampoon picture, it reunited him with producer Reitman. A year later, his “Wild Bill” Kelso character was featured on almost every poster promoting director Steven Spielberg’s unhinged Second World War comedy 1941. It was the first of three films Belushi made with his close friend, Ottawa-born actor Dan Aykroyd.
In 1978, they created a band called The Blues Brothers for SNL. Fronted by Jake (Belushi) and Elwood (Aykroyd) Blues, it was reunited in director John Landis’s epic 1980 musical comedy. Their on-screen partnership continued in director John G. Avildsen’s suburban comedy Neighbors, in which they played householders involved in escalating hostilities. At the time of Belushi’s death — the result of a March 1982 drug overdose — Aykroyd was working with Harold Ramis on a screenplay for producer-director Reitman. Released in 1984, Ghostbusters featured Bill Murray in the role intended for Aykroyd's best friend.
In fairness, it must be said that not all of Belushi’s Canadian connections were positive. His fatal drug dose was administered by Hamilton, Ontario-born Cathy Smith, a country singer turned drug dealer he’d met on the SNL set in 1976. “What you need to understand about John Belushi,” Reitman told Guardian reporter Hadley Freeman in a 2015 interview, “is he really was this extraordinary talent . . . he was at the centre of the zeitgeist in a way that’s hard to describe now. But his fame took over to a degree I’d never seen before and haven’t seen since.”