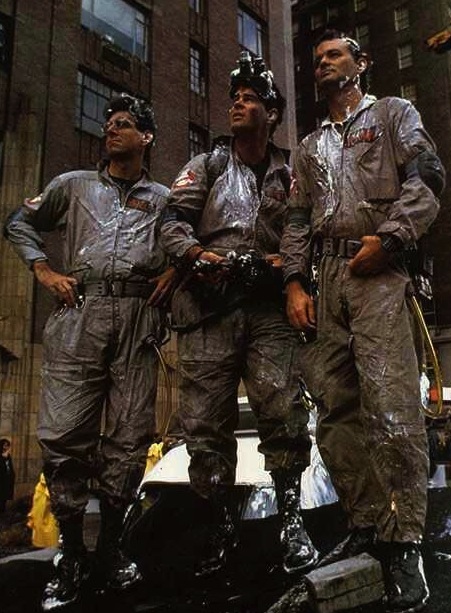 Who You Gonna Call?


Getting involved with possessed people


Hallowe'en, the night that's grown into a season, is upon us again. Though costumed kids won't be turning up at the door for another four days, decorations abound up and down our street. My next-door neighbour is a particular enthusiast, and his imaginatively macabre lawn displays have made his house a popular destination for trick-or-treaters. As he manages to add new items every year, I'm guessing that his out-of-pocket costs exceed the $125 that Forbes magazine currently claims is the average Hallowe'en spending per family in the U.S. Because All Hallows Eve falls on a Friday this year, American retailers expect to do particularly well, anticipating around $11.3 billion in sales. The popular culture plays its part, of course, keeping such seasonal staples as vampires, werewolves, zombies and headless horsemen in view all year round. What, I wonder, is the effect on an artist of having a birthday close to such a fraught celebration? Did Ivan Reitman, born on this day (October 27) in 1946, incorporate memories of an autumnal Toronto into his sophomore directorial outing, 1973's Cannibal Girls, or his second feature as a producer, David Cronenberg's Rabid (1977)? He certainly made a classic contribution to mock-scary cinema with the comedy hit of 1984, the wonderfully original Ghostbusters.

Tuesday, June 12, 1984.
GHOSTBUSTERS. Written by Dan Aykroyd and Harold Ramis. Music by Elmer Bernstein. Produced and directed by Ivan Reitman. Running time: 103 minutes. Mature entertainment with the B.C. Classifier's warming: May frighten young children, occasional coarse and  suggestive language. DR. PETER VENKMAN (BILL Murray) may be an unfulfilled romantic, but he's no fool. When the lovely Dana Barrett (Sigourney Weaver) gives him her come-hither look, he recognizes the devilish gleam in her eye.
"I make it a rule never to get involved with possessed people," he says. Professional ethics are to be expected from the head of the Ghostbusters.
Unexpected, but welcome, is the season's best action-fantasy. Despite massive hype, the other late Spring releases have all proved disappointingly trivial on screen, a collection of special effects shows packaged for the diversion of non-adults.
Tailored to teen tastes were Indiana Jones and the Temple of Doom (13-year-olds), Star Trek III: The Search for Spock (14-year-olds) and Gremlins (15-year-olds). Thank Gozer for Ghostbusters, a picture for people old enough to drive, drink and incur major debt.
Here is hilarity from the Eastern urban laugh triangle that connects New York, Toronto and Chicago. Produced and directed by Ivan (National Lampoon's Animal House) Reitman, it boasts a script by Second City veterans Dan Aykroyd and Harold Ramis, as well as the unique presence of Bill (Saturday Night Live) Murray.
Together, they offer us a tale of the New Economic Reality. Doctors Venkman, Raymond Stantz (Aykroyd), and Egon Spengler (Ramis) are parapsychological researchers who face unemployment when their university tenure is cancelled.
Venkman, fortunately, is a born entrepreneur. He convinces his colleagues that what New York really needs is a "professional paranormal investigations and eliminations" service. Thus are born the Ghostbusters.
One of their first customers is the aforementioned Ms Barrett, a symphony cellist, and the occupant of 'the corner penthouse of spook central," a sinister art deco skyscraper. When the netherworld makes its move, the result is the biggest, funniest exorcism in screen history.
Like Ron Howard, director Reitman is a maverick in today's formulaic, sequel-oriented movie market. Like Howard's marvelous mermaid fantasy Splash, Ghostbusters insists on using its spectacular special effects in support of a storyline rather than vice versa.
Fresh and original, Reitman's picture offers a winning combination of visual and verbal wit. Bang-on performances and an atmospheric score by Elmer Bernstein add up to solid summer entertainment.

Afterword: In addition to producing and directing, Ivan Reitman provided the voices for Gozer's minion Zuul and Slimer, the first ghost captured by the Ghostbusters. He did it all again when Slimer returned (along with every other member of the principal cast) for the sequel, 1989's Ghostbusters II. In the years since, there has been much talk of a third reunion, with Reitman directing. That all changed with the February 2014 death of Harold Ramis. Shaken by the passing of his long-time friend, Reitman told an interviewer "I suddenly felt that Ghostbusters didn’t necessarily need me as a director," adding that "with Bill Murray seeming disinterested in being in it, I thought it was better for me just to produce it." In early September, Reitman introduced the original film at a special 30th anniversary screening that was part of "Bill Murray Day" celebrations at the 2014 Toronto International Film Festival. Early this month (October), writer-director Paul Fieg announced that he would direct an as-yet untitled Ghostbusters reboot, with Reitman and Dan Aykroyd on board as producers. Rumours abound that the movie will  feature an all-woman team performing the paranormal investigations and eliminations. As for Reitman, his next directorial assignment could be Triplets, a sequel to his 1988 Twins. A comedy, it's designed to reunite Arnold Schwarzenegger and Danny DeVito with a new sibling, played by Eddie Murphy. “It’s very much in the development stage and it’s now caught up in the middle of studio stuff,” he said in a recent interview.

See also: For more on Ivan Reitman, read my feature on the financing of the animated feature Heavy Metal, his call to actress Marilyn Chambers suggesting that she audition for a part in 1977's Rabid, and my review of his 1979 film Meatballs.