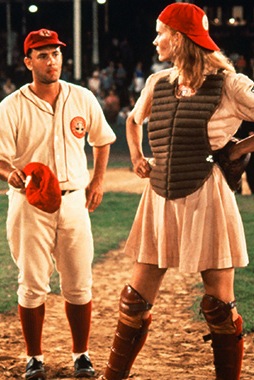 
As Barack Obama prepares for his January 28 State of the Union address, political pundits are involved in the 2014 round of POTUS Poll, the game that involves ranking the 44 Presidents Of The United States on their "greatness." Because there have been so many fictional presidents in recent years, film and TV fans have their own version, which we call Faux-val Office. As far as Reeling Back is concerned, the top spot has to go to Mackenzie Allen, the chief executive played by Geena Davis in the single season ABC-TV drama Commander in Chief (2005-06). Davis, who celebrates her 58th birthday today (Jan. 21), has no need to worry about President Allen's legacy. The character, described as a political "Independent," was the best portrayal of a public servant in this century. That an actress, beloved of fantasy film fans for her roles in such quirky fare as Transylvania 6-5000 (1985), The Fly (1986), Beetlejuice and Earth Girls Are Easy (both 1988), acquired the gravitas to lead the free world, was a singular achievement. It may have come from her involvement in team sports, specifically the great American pastime, baseball. It can hardly be a coincidence that the greatest fictional president was also behind home plate in the greatest baseball movie of them all, A League of Their Own.

Wednesday, July 1, 1992.
A LEAGUE OF THEIR OWN. Written by Lowell Ganz and Babaloo Mandel. Based on a story by Kim Wilson and Kelly Candaele. Music by Hans Zimmer. Directed by Penny Marshall. Running time: 128 minutes. Rated Mature with the B.C. Classifier's warning: "occasional coarse language." IN THE SUMMER'S best movie, the star wears a mask.
She also hits home runs. She is Geena Davis and, in A League of Their Own, she's a super sports hero. As Dorothy "Dottie" Hinson, she is catcher for the Rockford Peaches, one of four teams in the All American Girls Professional Baseball League.
Girls. Baseball.
Two of my favourite things.
When Penny Marshall, director of the magical Big (1988) and the poignant Awakenings (1990), saw a television documentary about the league, she saw a feature film in it.
Formed in 1943, the AAGPBL was a wartime hedge on the part of major league club owners who were fearful that there would be no men's baseball during the conflict.
To shape a screen story, Marshall called upon Ron Howard's favourite writers, Lowell Ganz and Babaloo Mandel (Parenthood; Splash). Movie-makers rather than historians, they put together a fictionalized account of the league that is by turns nostalgic, funny, affecting and exhilarating.
To catch the right mood, Marshall adopts a brash, brassy 1940s style. A pair of Oregon milkmaids, Dottie and her unmarried kid sister Kit Keller (Lori Petty) are discovered playing sandlot softball.
Talent scout Ernie Capadino (Jon Lovitz) is hilariously obnoxious and period perfect. Though level-headed Dottie is wary of city slickers, she agrees to go pro for the sake of eager, restless Kit.
Marshall immediately hits a triple. Her episodic film gets to first with its fine period look and a wise-cracking directness.
It touches second with its home-front savvy. Recalling Swing Shift (1984) and Bye Bye Blues (1989), A League of Their Own is about Mom's War, a time when women suddenly found unexpected personal fulfillment in non-traditional roles.
It reaches third with a tale of sibling rivalry. On the mound for Rockford, competitive Kit pitches to Dottie, the acknowledged "best player in the league."
Teammates and rivals, their tense relationship drives the film to its climax. Marshall's skill is such that in their final confrontation — bottom of the ninth in the seventh game of the series, score tied — I was as emotionally divided about the outcome as the sisters.
The picture steals home in performance. Davis, rock solid and totally in control as Big Sister, is outstanding.
She gets first-rate support from the likes of Petty and Tom Hanks, the team's in-need-of-redemption manager.
Making her first favourable impression as a screen actress is Madonna. Under Marshall's direction, the popstar plays centre fielder "All the Way" Mae Mordabito, and demonstrates some fine ensemble acting talent.
As does everyone, a team that includes Rosie O'Donnell, Megan Cavanagh, Tracy Reiner and Ann Cusack. Together, they score a hit in the Big league director's terrific new movie.

Afterword: In August 2013, expert archer Geena Davis slipped back into her mini-skirted Rockford Peaches uniform, nocked an arrow and filmed Archery Tricks, a public service announcement promoting gender equality, for Will Ferrell's Funny or Die website. Like the best ex-presidents, Davis actively works for the causes in which she believes. Like Joss Whedon, she advocates for women's issues. In 2007, she founded The Geena Davis Institute on Gender in Media, a research-based organization that has as its mission working "within the entertainment industry to dramatically alter how girls and women are reflected in media."