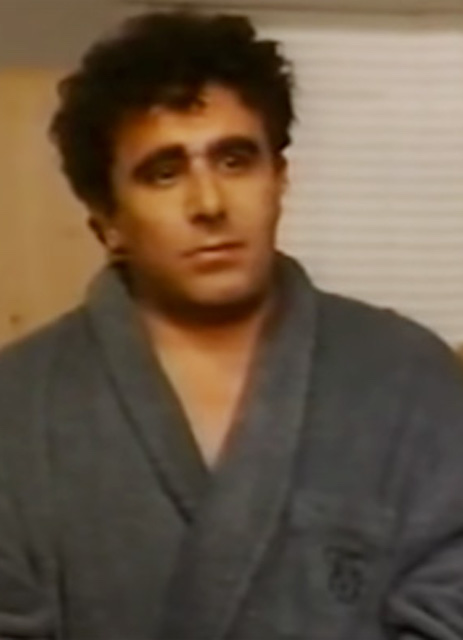 Piecing it back together


Sentimental journey with a hard edge


Though he made his reputation in Hollywood as a solid supporting actor, Saul Rubinek is capable of taking centre stage. Born on this day (July 2) in 1948, he demonstrated his star power in Canadian writer-director Mort Ransen’s 1990 mid-life crisis comedy Falling Over Backwards.

FALLING OVER BACKWARDS. Music by Milan Kymlicka. Written and directed by Mort Ransen. Running time: 105 minutes. AH, NOSTALGIA. FOR FILMGOERS still getting in touch with their feelings, Montreal writer-director Mort Ransen has Canadianized the urban life-crisis comedy-drama in his version of the mid-1980s interpersonal relations movie.
Meet sensitive schoolteacher Mel Rosenblum (Saul Rubinek). First glimpsed in a singles bar, self-absorbed Mel faces all the usual personal, romantic and generational reconciliation problems.
Recently divorced, he attempts to regroup emotionally by moving back to the old neighbourhood to live with his invalid father, Harvey (Paul Soles). In the process, he hopes to reunite dad with his divorced wife and Mel’s mom, Rose (Helen Hughes).
The row house they rent is owned by attractive, independent Jacqueline Lariviere (Julie St.-Pierre), with whom Mel becomes involved. Add to Mel's difficulties Canada's "two solitudes,” the cultural distance that divides Montreal’s French and English-language communities.
Amiable, if late in its trend cycle, Ransen's well-crafted Falling Over Backwards comes a cropper when it introduces abortion as a plot element. The issues of Jackie's choice gives an unexpectedly hard edge to an otherwise sentimental journey.

Afterword: Because it was among the many films to reach Vancouver as part of the city’s annual film festival, Falling Over Backwards received only a brief review. Recalling it today, I realize that its Montreal-born writer-director Mort Ransen was working within an established tradition of Jewish-Canadian artists — one that I discussed in the afterward to my review of Ján Kadár’s 1975 feature Lies My Father Told Me.
It was that same Montreal community that gave us actor Paul Rubinek, a stage and screen presence on both sides of the border for more than 50 years. A thorough professional, he contributed solid supporting performances to such films as director Clint Eastwood’s Oscar-winning 1992 Western, Unforgiven and Alvin Rakoff’s 1980 Canadian tax-shelter project, Death Ship, among the best and worst films that I’ve ever seen.
Among his many roles, my favourite remains that of Artie Nielsen, the former NSA agent who managed Warehouse 13 during that TV series's five-season run on the Syfy channel. A man with a past, Artie was in charge of collecting the powerful, often dangerous historical artifacts that are subsequently stored in the show’s title facility. Rubinek made the crusty character both mysterious and likeable, a quality that seasoned the program’s fantasy with just the right edge of comedy. Saul Rubinek turns 74 today (July 2).