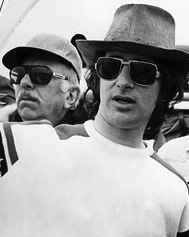 The man behind the madness, producer David Brown (left) visits his directorial discovery Steven Spielberg on the set of their 1975 feature Jaws.


As we brace ourselves for the made-for-TV movie Sharknado 2: The Second One, going to air this Wednesday (July 30), one question looms large: Why? Some say that all this high summer marine madness was inspired by the scene in Ivan Reitman's My Super Ex-Girlfriend (2006), in which G-Girl (Uma Thurman) lobs a great white shark though her ex-boyfriend's high-rise apartment window. Others cite the fact that Shark Week has been a fixture on the Discovery Channel's calendar since 1987, and that it was only a matter of time before things went totally nuts. Reeling Back believes that the ultimate responsibility rests with David Brown. Born on this day (July 28) in 1916, Brown, a magazine journalist turned movie producer, was the husband of famous feminist and Cosmopolitan editor Helen Gurley Brown. Shortly after their marriage in 1959, he urged her to write the bestseller that made her reputation, Sex and the Single Girl. In Hollywood, he is credited with bringing along a young television director named Steven Spielberg. Brown produced Spielberg's first theatrical feature (1974's The Sugarland Express). The evidence for his guilt in the Sharknado insanity comes from the second Spielberg-Brown collaboration, the 1975 summertime superhit Jaws.

Friday, June 20, 1975.
JAWS. Written by Peter Benchley and Carl Gottlieb, based on the novel by Peter Benchley. Music by John Williams. Directed by Steven Spieberg. Running time: 124 minutes. Mature entertainment with the B.C. Classifier's warning: some gory violence, frightening scenes.
Through the serene tranquillities of the tropical sea, among waves whose hand-clappings were suspended by exceeding rapture, Moby Dick moved on, still withholding from sight the full terror of his submerged trunk, entirely hiding the wrenched hideousness of his jaw.
— from Moby Dick  (1851), by Herman Melville

Afterword: In hindsight, we know that Jaws changed the economics of the U.S. picture business in the mid-1970s. Before the shark entered the market, the standard practice for releasing a film was to open in the major cities (New York, Chicago, Los Angeles), and then "go wide" on the strength of the critical response. Tossing aside the rulebook, Jaws opened in 465 theatres nationwide, a blitz that was accompanied by an unprecedented television ad campaign. Its phenomenal success has been given credit (or the blame) for popularizing the practice of saturation booking to maximize first-weekend profits. It's also said to have turned summertime into a season for major film releases. The year's top-grossing film, Spielberg's scary fish tale generated three sequels, none of them directed by the original hit-maker. Roy Scheider was back on board for Jaws 2 (1978), but not for Jaws 3-D (1983), in which the action was relocated to Florida and involved the Scheider character's now grown sons. In the final installment, 1987's Jaws: The Revenge, the boys return to Amity Island and their widowed mom (Lorraine Gary reprising her role), for an encounter with a shark that just might be the mate of the great white killed in the first film.
In the first paragraph of my 1975 review, I stated that "this year is the 200th anniversary of the final voyage of the Pequod," the ship captained by the ill-fated Ahab in Moby Dick. At the time, I was certain enough of my bit of literary trivia to go to print with it. Today, though, I have no recollection of what my source was for that factoid, and have yet to find any corroborating evidence on the Internet. What year did the Pequod last set sail? Thirty-nine years ago, I was sure that the answer was "1775." This morning, not so much.