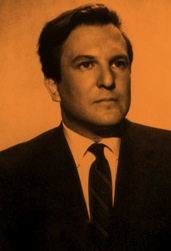 
In the fall of 1966, Ayn Rand's most ardent disciple visited Toronto to deliver the opening lecture in a series devoted to her personal philosophy, Objectivism. Some 300 believers heard Nathaniel Branden preach a sermon advocating "the virtue of selfishness."

ONE EVENING RECENTLY, SOME 300 people gathered in the basement salon of the Lord Simcoe Hotel [in Toronto] to hear Nathaniel Branden speak. Branden, the founder and president of an institute which bears his own name, is a disciple of writer Ayn Rand and a professional exponent of her philosophy, Objectivism.
His [1966] audience appeared to be an affluent lot, well-dressed, well-mannered and mature. They could have been white collar workers or graduate students. Each had paid a stiff admission fee to satisfy his (or her) curiosity about a philosophy that advocates "the virtue of selfishness."
When the beginning of the lecture was past due, a studious, self-assured gentleman mounted the platform. That man, Marshall Evoy, the full-time head of David and Mary Thompson Collegiate's English Department, is the Branden Institute's Toronto representative.
He spoke quickly, crisply and without embellishment. Without ever identifying himself, he swung into an introduction of the guest, "one of the people to whom Atlas Shrugged is dedicated — Nathaniel Branden".
Branden, first apostle of Randianism, hulked to the podium. Looking more like a quarterback than a prophet, the former psychotherapist gripped the edges of his lectern with meaty, manicured hands, scanned his audience with an icy glance and launched into his text.
This was the opening lecture of an annual series. It is a special event for which Branden himself always appears, travelling to the city in question after a substantial publicity buildup.
It is, essentially, a pitch, a course in some philosophical basics designed to warm up a novice audience and impress them with the dynamic rectitude of the Objectivist ideal. The Rand philosophy bills itself as the champion of Reason and sets up as its foils Mysticism and Altruism.
Thus, in keeping with the tenets of its teaching, the Branden Institute is very definitely a for-profit organization.
Branden is an impressive salesman. Almost six feet tall, the solidly-set lecturer is dressed in a conservative grey suit and a blue tie. A microphone glints against the blue silk as he shifts his weight from one foot to the other, speaking words that he has spoken many, many times before.
The study of philosophy, he tells his hushed, expectant audience, can be divided into five separate studies. The first of these is metaphysics, dealing with questions of existence and reality. Then follows epistemology, taking up questions of knowledge, sense perception and concept-forming.
His deep rolling tones bear the accents of a mixed background. Born in Brampton, Ontario in 1930, he is a product of Toronto high schools, UCLA and NYCU. Ethics, he says, is the study of values, of good and bad.
Objectivism has its own set of heroes and villains, its own interpretation of the movements of history and its own view of today's world. Reason, born with Aristotle, is fighting a historic struggle with mysticism, born with Plato. The clash has left us with a society that is "culturally bankrupt."
Politics, he tells his audience, is the study of social organizations. The periods which have seen the philosophy of Aristotle ascendant have been golden eras. Plato's supremacy has led to dark ages. While Aristotelianism was behind the development of the U.S.A, Platonism led to the U.S.S.R.
There is no whispering and little note-taking as he speaks. There is a strange hypnotism about the huge man with his scripted speech. Where there is humour, it is dry, unsmiling and harsh.
Early in his talk he condemned catch-phrase thinking, although his remarks are now permeated with it. Aesthetics is the study of art and beauty.
The philosophy of Ayn Rand is a hard, aggressive discipline. It is hard to question most of what she has said, harder to argue with her practiced follower.
The Advocate of Reason knows the value of the speaker's ploy, the creation of heroes and windmills for them to battle, the use of forceful language, the choice of loaded words.
Objectivism is a powerful product, Nathaniel Branden tells his audience. For a tuition of $40, he will reshape your philosophical thinking and make you, and your individual reasoning mind, the centre of the universe.
Branden is an entrepreneur who has packaged the meaning of life, and he sells it in 20-lecture doses. He is a capitalist Christ.

The above is a restored version of a Varsity column by Michael Walsh originally published in 1966. For additional information on this archived material, please visit my FAQ.

Afterword: When I covered Nathaniel Branden's 1966 Toronto lecture, I was familiar with the official history. I knew that he was dedicated to Ayn Rand, and that she had dedicated her 1957 novel Atlas Shrugged to him. In 1958, he created the Nathaniel Branden Institute to promote her Objectivist philosophy to the world. In 1964, the New American Library published The Virtue of Selfishness: A New Concept of Egoism. Reading the 173-page paperback, a collection of essays written by Rand and Branden, made me want to take a closer look a the phenomenon that was Randianism, and the above column was the result.
A generation later, the world learned that there was an earthier dimension to their meeting of the minds. In 1986, Branden's ex-wife Barbara published her tell-all memoir The Passion of Ayn Rand, and we learned that Nathaniel's fascination with the Russian-born writer began in the summer of 1944, when he first read The Fountainhead. He was 13. In late 1948, Nate met the Winnipeg-born Barb, who shared his enthusiasm for the novel. A year later, they moved to California to enroll in UCLA, where he began a correspondence with their favourite author. When the young couple married in 1953, Rand was matron of honour. In late 1954, Nate and Ayn's relationship turned physical, with results reported in lip-smacking detail in the 2014 Branden obituary in London's The Telegraph newspaper. In 1999, Barbara's book was adapted for the screen. Filmed in Toronto, the Emmy Award-winning made-for-TV movie starred Helen Mirren as Rand, Eric Stoltz as Nate, Julie Delpy as Barb and Peter Fonda as Rand's husband Frank O'Connor.

See also: The closest Ayn Rand came to writing an autobiography was the story she told in her 1935 novel We the Living. It was filmed in Italy in 1942 and starred the self-possessed Alida Valli as its Rand-like heroine.

Subjects for further study: To the best of my knowledge, little attention has been paid to the question of how much we should blame Canada for the promotion of Rand's Objectivist philosophy to the world. Both Nathaniel and Barbara Branden were Canadians. After her break with the Brandens, Rand placed her trust in Barbara's cousin, the Winnipeg-born Leonard Peikoff, whom she named as the heir to her intellectual work and her legal estate.
Another question for the historians of popular culture: Which science-fiction writer did most harm to their readers? On one hand there is Ayn Rand, whose Objectivist disciples (including former U.S. Federal Reserve Chairman Alan Greenspan) are responsible for an appalling economic reign of error. On the other is L. Ron Hubbard, whose storefront religion Scientology has been embraced by a suprising number of Hollywood stars, resulting in such embarrassments as the made-in-Canada movie Battlefield Earth (2000).