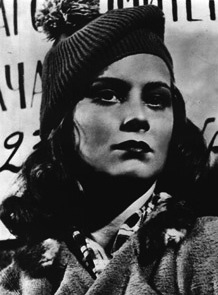 As played by Alida Valli, Kira Argounova is a Soviet Scarlett O'Hara in the 1942 screen adaptation of Ayn Rand's We the Living.

Ayn: It rhymes with mine


Experiencing the world according to Rand


“I worship individuals for their highest possibilities as individuals" Ayn Rand wrote in her 1938 dystopian novella Anthem, "and I loathe humanity for its failure to live up to these possibilities.” Rand, born on this day (February 2) in 1905, conceived her tale of rebellion in a future totalitarian state when she was a teenager growing up in the Soviet Union. It was written after the publication of her first novel, We the Living (1936), and before the work that won her a place among the most influential women of the 20th century, 1943's The Fountainhead. Her ideas, later codified into a philosophy she called "Objectivism," were embraced by social libertarians who turned the 1940s Hollywood screenwriter into their intellectual idol. Believe it or not, there is a Wikipedia entry — "List of people influenced by Ayn Rand" — that contains links to more than 100 prominent persons, among them Canadian pro-pot activist Marc Emery, Australia's 22nd prime minister Malcolm Fraser, former U.S. Federal Reserve chairman Alan Greenspan, gonzo journalist Hunter S. Thompson, comic book artists Steve Ditko and Frank Miller, and Star Trek creator Gene Roddenberry. Controversial to this day, Rand offered the world a glimpse into her formative years in her first novel, a semi-autobiographical work adapted into two 1942 Italian films, later re-edited into the epic-length We the Living

Wednesday, December 20, 1989.
WE THE LIVING (edited from the 1942 feature films Noi Viva and Addio Kira!). Written by Corrado Alvaro and Orio Vergani. Based on the 1936 novel by Ayn Rand. Music by Renzo Rossellini. Directed by Goffredo Alessandrini. Running time: 175 minutes. Rated Mature. In Italian with English subtitles. DR. GOEBBELS WASN'T FOOLED. When producer Massimo Ferrara-Santamaria tried to sell his new feature Noi Viva in Germany, the Italian film studio executive tried to convince him that the film was "a beautiful story of love."
An unauthorized adaptation of Ayn Rand's 1936 novel We the Living, it had been a prize winner at 1942's Venice Film Festival. It was doing well in its Italian theatrical release.
A romantic tragedy set in the spiritual winter of post-revolutionary Russia, it offered audiences the Garboesque Alida Valli as a Soviet Scarlett O'Hara.
A private screening was arranged for Goebbels in Berlin. I'm sure the Nazi propaganda minister enjoyed the drama's early scenes, especially a sequence in the Petrograd Technological Institute that combines Hollywood cheekiness with all the right political attitudes.
The communist-led engineering students have just finished singing a patriotic song. "When all this is over," says headstrong Kira Argounova (Valli), the pretty, 18-year-old daughter of dispossessed factory owners, "when every trace of Bolshevism is disinfected from history, what a glorious funeral march this will make."
"You little fool," says the attractive, leather-coated stranger who is standing next to her. "What are you talking about?"
"How much are you paid for snooping around?" says Kira.
"You know where little girls like you belong?" Andrei Taganov (Fosco Giachetti) asks in a patronizing tone.
"Yes," she says, enjoying the game. "Where men like you wouldn't be let in the back door."
"You must be new here," he says, attempting to be friendly. "I'd advise you to be careful."
"Our stairs are slippery and there are four floors to climb," she says, taking his measure. "So be careful when you come to arrest me."
"Are you exceedingly brave? Or just stupid?" says the handsome GPU (secret police) officer.
"I'll let you find that out," says our saucy heroine. Like Gone with the Wind's Scarlett, Rand's Kira will be unlucky in love.
In the course of the epic-length tale, she'll give her heart to an aristocrat's son, the soulful, self-pitying Leo Kovalensky (Rossano Brazzi). She'll be loved in turn by the soulful, idealistic man-of-action, Andrei.
Goebbels, no fool, could see where director Goffredo Alessandrini's drama was heading. Its anti-communist rhetoric notwithstanding, We the Living was deemed inappropriate for Nazi cinemas because of its "too mild" treatment of the Soviets — Andrei is not just handsome, he actually manages to out-noble Scarlett's Ashley Wilkes — and because its real villain is totalitarianism, regardless of the form.
Word eventually got back to Mussolini's Fascists and the picture disappeared from Italian screens as well. It remained unseen until 1968, the year that novelist Rand's literary representatives located the negatives of it, and its 1942 sequel Addio Kira!, in storage in Rome.
In 1986, We the Living made its debut in North America. A classic, thoroughly watchable cultural artifact from the age of Casablanca, the long-lost feature is all the more fascinating in the age of glasnost.

Afterword: Definitely an A-list production, We the Living includes in its cast three of Italy's biggest stars of 1942 — Alida Valli, Rossana Brazzi and Fosco Giachetti — working under its most important director, Goffredo Alessandrini. What it didn't have was the permission of the book's author, U.S. resident Ayn Rand. At the time, the two nations were on opposite sides of the Second World War, a fact that made negotiating a rights agreement unnecessary. After the war, an attempt to rerelease the picture(s) failed when Rand refused to come to terms with the Italian moviemakers. Rand's legal team eventually gained control over the films, and began the process of restoration and re-editing, which included the elimination of pro-Fascist content. In 1986, five years after Rand's death, the single-feature version arrived in theatres.
Before becoming a full-time "philosopher" and grande dame of the Objectivist movement, Ayn Rand published four works of fiction and a stage play. All of them were made into movies. Her play, a 1934 courtroom drama called Night of January 16th was adapted for the screen in 1941. The movie version starred Robert Preston and Ellen Drew. Rand's debut novel, 1936's We the Living, became the 1942 film(s) discussed above. Anthem, her 1937 science fiction novella, didn't make it to the screen until 2015, and then only as a 13-minute student film. Her major breakthrough came with the publication of The Fountainhead in 1943. A hit as a novel, its film adaptation came in 1949, a major Hollywood epic that paired Gary Cooper and Patricia Neal as the attractive individualists at odds with New York's collectivistic mediocrities.
Her final book, 1957's Atlas Shrugged, was another dystopian science fiction novel. Although it immediately became a big best-seller, the movie version was a long time coming. Financed by a Rand super-fan, multimillionaire businessman John Aglianoro, Atlas Shrugged: Part I was released to theatres in 2012. Despite massive audience indifference — the $20-million feature made less than $5 million at the box office — producer Aglianoro continued his planned trilogy. Atlas Shrugged: Part II arrived in 2012, and Atlas Shrugged: Part III: Who Is John Galt? followed in 2014. Although none of them made money, interest in Rand continues undiminished on the Internet. Her "guest appearance" in the superhero comic Jupiter’s Circle Vol. 2 #3, released last week (January 27), is currently trending.

See also: In the fall of 1966, Ayn Rand's most ardent disciple and sometimes lover visited Toronto to deliver the opening lecture in a series devoted to her philosophy of Objectivism. Click on the link to read my report on Nathaniel Branden.