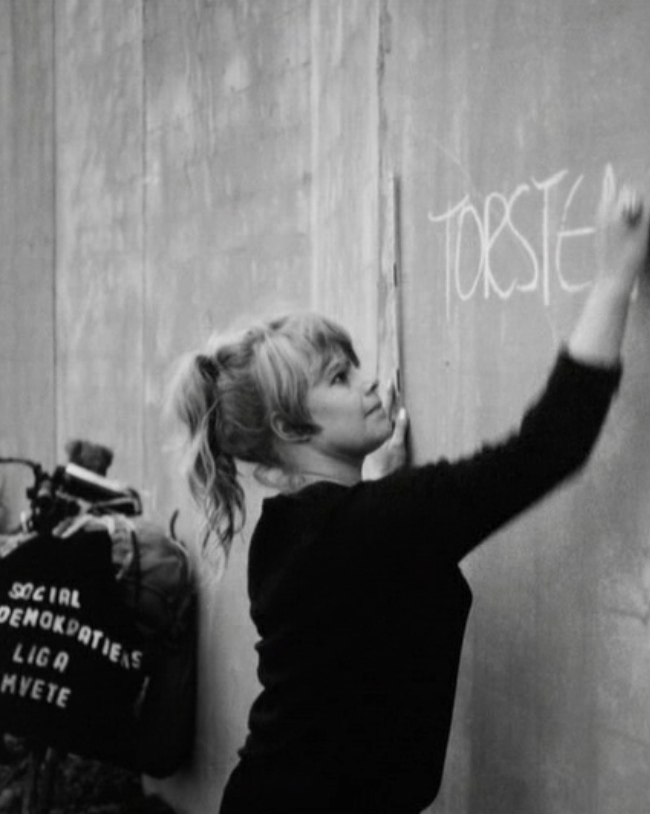 Political activist Lena (Lena Nyman) chalks an incendiary message on a wall in Stockholm in director Vilgot Sjöman’s 1967 feature I Am Curious (Yellow).


As 2016’s Nobel Prize-winning poet famously said, “the times they are a-changin’.” Among the changes apparent in November was an increase in the number of voters willing to take to the streets to express buyer's remorse over their presidential choices. On Saturday (November 27) in South Korea, a crowd estimated at 1.5 million marched through downtown Seoul calling for the resignation of President Park Geun-hye. She is currently facing impeachment, the result of a scandal based on her involvement with a religious cult. In South Africa, similar calls are being heard in both the streets and the corridors of power, as revelations about President Jacob Zuma continue to erode his popularity and energize mass public protests. Even a “mature” democracy like the United States, with its long history of voters sucking it up and accepting the results of a rancorous presidential election, is in turmoil. Americans, unhappy with Donald Trump’s surprise victory at the polls, have mounted protest marches almost every day since. The public mobilizations are unprecedented, recalling to some historians the anti-war movement that rocked the republic during Richard Nixon’s presidency. It would all be a matter of déjà vu for Vilgot Sjöman, a filmmaker who set out to question the givens of Swedish politics in the mid-1960s with a new kind of activist entertainment. Born on this day (December 2) in 1924, Sjöman found himself in the midst of a censorship crisis when his 1967 feature I Am Curious (Yellow) was banned in the U.S.

I AM CURIOUS (YELLOW) (Jag ä nyfiken - en film i gult). Music by Bengt Ernryd. Written and directed by Vilgot Sjöman. Running time: 119 minutes.  (Original running time: 121 minutes.) In Swedish with English subtitles. Restricted entertainment with the B.C. Classifier’s warning: some nudity and sex. FOR THE PAST WEEK [in May, 1970] some of the most restless audiences this side of a kiddies’ matinee have been crowding into Georgia Street’s Strand Theatre. The source of all the interest (and unrest) is the western Canadian premiere of director Vilgot Sjöman’s notorious I Am Curious (Yellow).
Few have found the controversial Swedish film to be quite what they expected. Most are willing to admit, though, that there is considerably more to be curious about than the movie’s seven brief, highly publicized scenes of love-making.
So much more, in fact, that a casual filmgoer runs the risk of becoming completely lost in Sjöman’s complex system of layered plots, political themes and dual characterizations. At times, it’s almost impossible to recognize the players without a scorecard.
Curious is the story of a moviemaker and the movie he is making. His film, centred around the many involvements of an intense young woman, explores the changing state of Swedish society.
A former pupil of Ingmar Bergman, Sjöman, 42, made four films before Curious. He steps into his fifth, playing the part of a director infatuated with his star, 22-year-old drama student Lena Nyman (played by Lena Nyman).
In Curious, Lena is an empty-headed, ambitious actress. Having passed her audition on Sjöman’s casting couch, she expects to make her reputation in his current project, Lena On The Road: A Kaleidoscope.
In Kaleidoscope, Sjöman’s film-within-the-film, Lena plays a crusading young activist who finds herself unable to live up to her lofty ideals. Her character is the daughter of an aging Stockholm picture-framer, Rune Nyman (Peter Lindgren).
An idealist in his own youth, Nyman joined the Loyalist cause in the Spanish Civil War. Something went wrong, and without explanation, he returned to Sweden after only three weeks.
For that apparent moral lapse, Lena holds her father in perpetual contempt.
For herself, Lena has chosen the paths of socialism and non-violence, advocating that Sweden abolish its monarchy and adopt a passive-resistance system of national defence. Ritualistic social crusades fill her life until she meets Borje (Borje Ahlstedt), a salesman with more charm than honesty.
During the course of making Kaleidoscope, Lena the actress delights in teasing her lover/director. Manfully, Sjöman tries to keep his mind on his work.
Despite his fierce concentration, the results will only be partially intelligible to Vancouver audiences. An intensely personal film, Curious was made without any thought of entertaining foreigners.
Sjöman takes for granted that we already know him and his previous work, and are acquainted with Swedish history and current affairs. As he twists Lena’s Kaleidoscope, numerous personalities, places, events and institutions tumble into view. Without a crash course in Swedish civics, though, we are only able to guess at their meaning.
One example: Lena the activist has a black bag labelled “The Guilty Conscience of Social Democracy.” An off-screen voice invites us to participate in a contest by guessing what it contains.
Sjöman expects us to know that the Social Democrats are the ruling party in the Swedish parliament, and have been for over 30 years. Like many a Swedish intellectual, Sjöman is disillusioned with their program and considers the party to be be an ossified Establishment.
Lena’s bag is filled with broken political promises.
Sjöman is angry and concerned. Curious is his protest, an attempt to produce a portrait of his society, both honest and provocative. Unfortunately, his political barbs are dulled by our distance from his major targets.
In their place, and blown up out of all proportion in North American minds, is his unflinching sexual candour. Lena is the product of her time and place, a modern Scandinavian female for whom sex is a natural, fully integrated part of her life.
In 1967 Stockholm, audiences saw Lena’s relationships within the context of the whole film. In 1968 New York,  Sjöman’s direct and un-romantic approach proved to be a shocker, causing the U.S. Customs case that made Curious notorious.
The Vancouver print runs about two minutes shorter than the original. Though trims have been made from the three most explicit scenes, local audiences get a reasonably fair taste of Sjöman’s direct, almost clinical style.
Lena and Sjöman are curious about things other than sex, not the least of them being film technique. The director is questioning the demarcation point between documentary and drama. In Curious, he experiments with a form of fictional documentary that slides from the straightforward style of street interviews into fantastic dream sequences.
Without a single visual clue to spell out what is or isn’t “real,” his audience is forced into wrestling with his ideas as well as his images.
On the whole, North American audiences have been coming to Curious prepared only for an intimate look at a Swedish girl’s stormy sex life. What they are getting, like it or not, is one man’s vision of the meaning of life in Sweden.
And they will have to wait for a full 35 minutes before Lena sheds a stitch.
On its home ground, I Am Curious (Yellow) was an interesting, if not particularly remarkable, bit of general entertainment. Outside of Europe, however, its real appeal is to rather specialized audiences.
The young, perhaps, will feel sympathy for poor, neurotic Lena’s identity crisis. Intellectuals should appreciate Sjöman’s social-democratic posturing. And, while movie buffs may enjoy his experiments with cinema style, sex-exploitation fans are in for for an English-subtitled disappointment.
*    *    *
RECOMMENDED READING for the sincerely curious: I Am Curious (Yellow), the Grove Press Black Cat paperback, contains Vilgot Sjöman’s sceenplay. Translated from the Swedish by Martin Minow and Jenny Bohman, this 1968 book also features extensive excerpts from the transcript of the May 1968 trial that upheld the Customs ruling banning the film in the U.S.

Afterword: Readers of my 1970 review were aware of the place of I Am Curious (Yellow) in what was then an ongoing legal battle over freedom of expression in the movies. The picture had been seized by U.S. Customs in 1968 under a 1930 law that empowered the nation’s border guards to prevent the import of obscene materials. It was not Lena’s politics that offended America’s moral guardians, but her nudity and off-handed sexual activity, the very elements that attracted the attention of censor-baiting entrepreneur Barney Rosset. No stranger to the courts, Rosset’s Grove Press earlier had fought the good fight for such banned books as D.H. Lawrence’s Lady Chatterly’s Lover and Henry Miller’s Tropic of Cancer. As a film distributor, he did the same for director Vilgot Sjöman’s movie, launching the appeal that produced the landmark decision that ruled that because the film was “not without redeeming social value,” it was fit for Americans to view.
It was a legal precedent that changed the meaning of the word “obscene,” and opened the way for such films as 1972’s Deep Throat and Last Tango in Paris to enter the cinema mainstream. Rosset’s reward came in the form of record boxoffice revenues. I Am Curious (Yellow) became the biggest foreign-language hit ever, grossing $20.23 million (or more than $113 million in today’s dollars).
Sadly for Sjöman, his biggest international hit did not win him the loyal American audience that his Swedish cinema mentor Ingmar Bergman enjoyed. His I Am Curious (Yellow) was the first half of a 229-minute film package. The second part, 1968’s I Am Curious (Blue), met with audience indifference and is largely forgotten today. (The parenthetical Yellow and Blue labels refer to the colours of the Swedish flag, and were intended to underscore Sjöman’s political intent.) His subsequent directorial career included a dozen more theatrical features, none of which had much impact outside of Sweden. His last picture, 1995’s Alfred, was a biographical drama that told the story of the Swedish engineer who made a fortune from his invention of dynamite and used it to found the Nobel Prizes. Vilgot Sjöman died in 2006 at the age of 81.