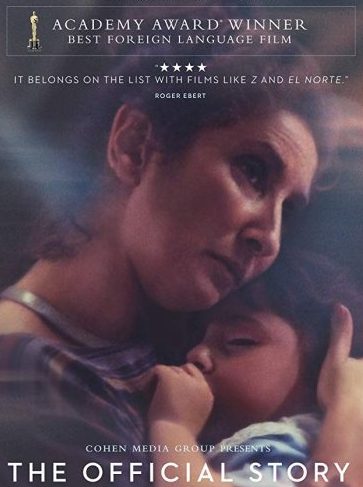 Its Oscar win is highlighted on the CD cover of director Luis Puenzo’s 1985 Spanish-language feature Los Desaparecidos (The Official Story).

Reflecting on a dirty war


Truth put ahead of blissful ignorance


Agreed to on this day (November 25) in 1975, the infamous Plan Cóndor comes to mind following this month’s coup d’état in Bolivia. The truth of what happens in South America can take years to come out, as Argentinian director Luis Puenzo shows in his 1985 feature The Official Story.

THE OFFICIAL STORY. (Los Desaparecidos). Co-written by Alda Bortnik. Music by Atilio Stampone. Co-written and directed by Luis Puenzo. Running time: 112 minutes. Mature entertainment with the B.C. Classifier’s warning: occasional very coarse language. In Spanish with English subtitles. UNTIL NOW, LIFE HAS been good to Alicia Marnet Ibañez (Norma Aleandro). Despite the failing economy and Argentina's humiliation in her [1982] South Atlantic war with Great Britain, Alicia and her husband Roberto (Héctor Alterio) enjoy considerable personal success.
Until now, she has lived in a closed, comfortable world. A high school history teacher married to a corporate executive, Alicia is untouched by the social and political changes that have shaken the nation.
Until now, she has been content to do her job and delight in Gaby (Analia Castro), her lively, adopted daughter. Like most Buenos Airiens, Alicia knows someone who "disappeared," but believes that "if he was seized, there must have been a reason."
The doubting begins the afternoon that her old friend Ana (Chunchuna Villafañe) returns from Europe. They sit and talk long into the night, and Ana tells Alicia of the 37 days of torture that preceded her seven years of exile.
Ana tells her of others who were not so lucky, of expectant mothers who did not survive childbirth in captivity. A chilled Alicia hears that "their babies went to families who wanted babies without asking questions."
The doubting increases when Roberto refuses to discuss the matter, reminding her that they agreed never to speak of it. Belatedly, Alicia considers who they are, and to what horrors they may be party.
Though set in 1983, the last year of junta rule, writer-director Luis Puenzo’s The Official Story could only be produced after the election of a civilian government. According to the report of the commission appointed by President Raul Alfonsin, as many as 9,000 Argentinians disappeared during the military’s "dirty war" on dissidents.
Rather than overwhelm filmgoers with statistics, Puenzo shows us the disintegration of a family that at first appears to have weathered the crisis intact.
Appearances are deceiving, as Alicia discovers when she begins questioning her own good fortune, putting the truth ahead of blissful ignorance.
Known as Los Desaparecidos (The Disappeared Ones) during its South American release, The Official Story is designed both to reflect and encourage a spirit of moral renewal in Argentinian society. A powerful emotional drama, it offers a humanitarian message to all audiences.

Afterword: I’m sure that there were high fives in the Langley, Virginia headquarters of the CIA two weeks ago (November 10, 2019) when the Bolivian military “suggested” that the elected president Evo Morales step down. An old-school coup, it probably reminded America’s spooks of the glory days of Plan Cóndor, the Washington-backed covert agreement signed on this day (November 25) in 1975 by the military intelligence service leaders of Argentina, Bolivia, Chile, Paraguay and Uruguay. For more than a decade, South America’s right-wing dictatorships co-operated in a murderous campaign of political repression and state terror in support of U.S. corporate interests. The CIA supervised it all, providing planning, financing, co-ordination, arms shipments, tech support and training in the arts of torture and assassination. (The U.S. role in Latin American politics was noted as early as 1973 in director Costa-Gavras’s French-language feature Etat de Siege (State of Siege).)
About that word “coup,” used in the above paragraph to describe the the most recent regime change in Bolivia. Executives of the multinational mining companies, who’ll be enriched as a result, prefer that we call the ousting of a mineral-rich nation’s legitimate president an exercise in “democracy™.”  Sensitive to their wishes, the U.S. government and corporate mass media have all fallen into line — detailed in this posting to the FAIR (Fairness &Accuracy in Reporting) website — to offer us "the official story." The trouble is we’ve seen this movie too many times before.
And that brings us back to The Official Story, the first film from Argentina to win an Academy Award as Best Foreign Language Feature. The 1985 picture was released in the U.S. at a time when Washington was providing financial, logistical and military support to a group called the Contras, terrorists fighting a proxy war against the government of Nicaragua. Hollywood liberals were outraged, and made their feelings known at the March 1986 award ceremonies by honouring director Luis Puenzo's film. Later that year, reports began to accumulate about an illegal operation today remembered as the Iran-Contra Affair, a bit of history that makes one skeptical about the unfolding political drama in Lithium-rich Bolivia.