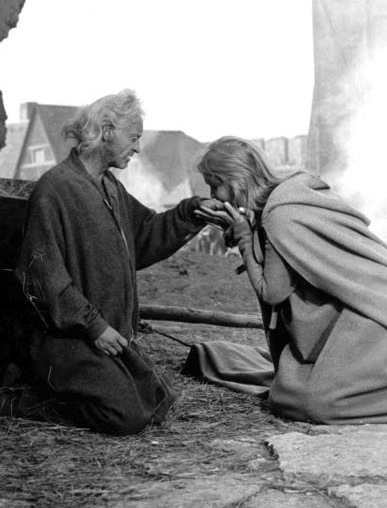 
Now in the fifth week of a 15-week season, 2014's Bard on the Beach Shakespeare Festival is well begun. Founded in 1990, its original acting company attracted some 6,000 Bard-starved Vancouverites to a tent in Vanier Park, where comedy came with a view of English Bay and the North Shore Mountains. Its four-week run of A Midsummer Night's Dream was the beginning of an annual tradition that this year (2014) celebrates its 25th anniversary. In that time, it's built a bigger tent, added a second stage and expanded its schedule to offer four productions a year. To date, the programs have included 35 of the 38 plays in the acknowledged canon. (Completionists hope to see Coriolanus, Henry VIII and Two Noble Kinsmen in future seasons.) Currently, the Bard company is offering lavish remountings of A Midsummer Night's Dream and The Tempest on its main stage. On the more intimate Douglas Campbell stage are Cymbeline and Equivocation, a drama not by, but about William Shakespeare. In the days before Bard on the Beach, hardcore fans of the man from Stratford had to make the pilgrimage to the Oregon Shakespeare Festival in Ashland (founded in 1935, and still going strong), or wait for the release of a great movie, such as Grigori Kozintsev's Korol Lir (King Lear).

Wednesday, July 22, 1981
KOROL LIR (King Lear). Translation by Boris Pasternak, from the stage play by William Shakespeare. Music by Dmitri Shostakovich. Written and directed by Grigori Kozintsev. Running time: 139 minutes. Rated Mature entertainment. In Russian with English subtitles. HEAVEN HELP US, old Will Shakespeare is in the headlines again. Dead these 365 [now 398] years and still the centre of attention and controversy.
At the risk of adding fuel to an already raging fire, let me suggest that all of the Stratfords  — Ontario, Connecticut and on-Avon — are artistic redundancies. The screens, big and small, have brought the Bard to more people than all of the stages and festivals in the world.
Let me further suggest that old Will's countrymen have not adapted well to the new technologies. The best examples of screen Shakespeare are invariably directed by people whose first language is something other than English.
Max Reinhardt, a German, gave us our most beguiling A Midsummer Night's Dream (1935). In 1971, Roman Polanski, a Pole, directed the screen's best Macbeth.
An Italian, Franco Zeffirelli, caught the popular imagination with his adaptations of Romeo and Juliet (1968) and The Taming of the Shrew (1967). A Russian, the late Grigori Kozintsev, directed the definitive  Hamlet (1964) and the essential King Lear (1971).
A delegate to the first World Shakespeare Congress, held in Vancouver in 1971, Kosintsev explained that his films, "after the plays by William Shakespeare, are renderings rather than translations. The object of screen adaptation," he said, "is to preserve not the text, but the metaphor."
His Korol Lir (King Lear), privately screened for Congress delegates at the Varsity Theatre in August, 1971, returned this year [1981] for the Varsity Festival. An outstanding film, it remains the screen's greatest Lear.
Kozintsev's style is classically Russian. Absent are the ploys and gimmicks —blurred edges, multiple printing, flashes forward and back, changes in film speed or colour — that are frequently used to make films "artistic."
Deliberately shot in black and white, his Lear begins and ends with landscape. The first shots show us the poor, the lame and the crippled making their way along a barren road.
The people, solemn and apprehensive, have come by their thousands to stand beneath the battlements of a castle and hear the pronouncement dividing the kingdom. Before a single line has been spoken, we know that this day will come to no good.
The film ends with the people as well. This time, ravaged by war and surrounded by the debris of battle, they, are silently, stoically rebuilding.
Boris Pasternak, best known in the West for his 1958 novel Doctor Zhivago, provided a spare and poetic translation of the text. The cast, many of them chosen for what Kozintsev called their "country faces," provide solid, understated performances. Kozintsev's Lear, Estonian actor Yuri Yarvet, has more in common with B.C. First Nations actor Dan George than any of the recent English-language Lears.
Except for Dmitri Shostakovich's score, which blares a touch too heroically, every facet of the film serves the overall elemental feeling. Consider the director's use of fire.
In the first act, Lear receives his daughters, and their declarations of love, seated beside a roaring hearth. Later, during his confrontation with the antagonistic Goneril (Eliza Radzina), her hearth contains only smoking embers.
When Lear rushes in crazed flight from daughter Regan's courtyard, the camera follows him across a baked and blackened landscape, one as cold and broken as a burnt log. Flames also serve to underscore the passion of the illicit lovers, Edmund (Regimantas Adomaitis) and Regan (Galina Volchek), who embrace admist battlefield fires, destructive flames that consume peasant homes and noble castles alike.
This is tragedy played out not as cold ritual, but as human drama. Kozintsev, like Zeffirelli, Polanski and Reinhardt, sees clearly what old Will was all about.

Afterword: At this distance, I have no idea which particular Shakespearean controversy was making headlines in the summer of 1981. It may well have been yet another chapter in the never-ending authorship debate that regularly erupts in scholarly circles. As for my assertion that "the best examples of screen Shakespeare are invariably directed by people whose first language is something other than English," please note that this review was written eight years before Britain's Kenneth Branagh kicked off the great revival of cinematic Shakespeare that we are enjoying to this day. Since the Anglo-Irish Royal Shakespeare Company alumnus made his directorial debut with 1989's Henry V, there have been regular additions to the Bard's cinematic library. In addition to Branagh's contributions (Much Ado About Nothing, 1993; Hamlet, 1996; Love's Labour's Lost, 2000; As You Like It, 2006), such interesting directors as Australia's Baz Luhrmann (Romeo + Juliet; 1996), Britain's Trevor Nunn (Twelfth Night; 1996) and Michael Radford (The Merchant of Venice; 2004) and an American, Joss Whedon (Much Ado About Nothing; 2012), have all offered fine interpretations. Most interesting, though, is Broadway director Julie Taymor, whose credits so far include Titus (1999), and Tempest (2010). Her take on A Midsummer Night's Dream is promised for later this year (2014).