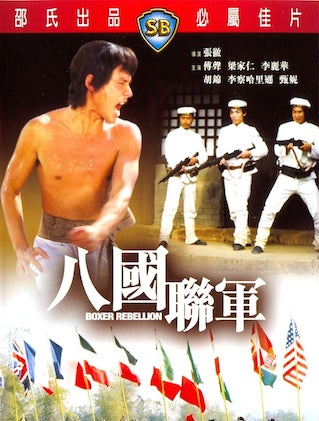 The flags of the imperial powers with extraterritorial jurisdiction in China circa 1900 are displayed on the poster for director Chang Cheh’s 1975 historical epic, Boxer Rebellion.


History viewed from the Chinese side


On this day (November 2) in 1899, a national liberation movement called The Society of Harmonious Fists rose up against the foreign powers occupying China. The story of its 10-month battle and cruel aftermath is the subject of director Chang Cheh’s 1975 historical epic, Boxer Rebellion

Afterword: The Boxers lost the fight, but it can be argued that they eventually won their war. Their rebellion is often cited as a death blow to dynastic rule in China. In 1912, Dr. Sun Yat-Sen (referred to in the movie) became the provisional president of the new Republic of China. Sun’s Nationalist Party was opposed by a Communist Party, founded in 1921 in the wake of the 1917 Russian Revolution. The 20th century would be a tumultuous time for the world’s most populous nation, a country much abused by the 19th century’s many colonial empires.
When civil war between Communist and Nationalist forces broke out in 1927, the names “Mao Tse-tung” and “Chiang Kai-shek” were added to the style guides used in U.S. and Canadian newsrooms. That conflict was still going on when the first act of the Second World War, Japan’s invasion of China, occurred in July, 1937. When the war widened to include Europe and the United States, China was acknowledged as “a great power” ally in the fight against fascism. In 1949, four years after Japan’s surrender, Mao’s forces prevailed in the civil war and the People’s Republic of China (PRC) was founded. For years thereafter, the American political class would argue the question of “who lost China?” Movies like 1963’s 55 Days at Peking would maintain the tradition of infantilizing a nation that had made the choice not to accept the U.S. as the essential superpower.
One source of the Boxers’ anger was the fact that they knew they were part of a civilization with more than 2,000 years of history and accomplishment, a civilization that was getting no respect from the newly industrialized West. Against all the odds, they were determined to make China great again. Not to put too fine a point on it, the PRC has come a long way in 69 years. Late last year, Britain’s Economist newsmagazine (a publication that’s been covering international politics since the opium wars) featured China’s President Xi Jinping on its cover, identifying him as “The world’s most powerful man.” He leads a nation poised to replace the United States as the world’s largest economy. The story continues . . .