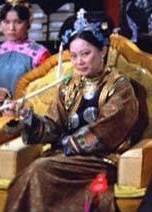 
For approximately 1.4 billion people around the world, today (February 16) is the Chinese New Year. To mark the occasion, and to celebrate the beginning of the Year of the Dog, Reeling Back recalls director Li Han-hsiang 1975 Hong Kong epic, The Empress Dowager.

Saturday, December 13, 1975.
THE EMPRESS DOWAGER (Qīng Guó Qīng Chéng). Music by Frankie Chan. Written and directed by Li Han-hsiang. Running time: 165 minutes. Mature entertainment. In Mandarin Chinese with English subtitles. ENGLAND HAS HER ELIZABETH R, Russia her Great Catherine and Sweden, the capricious Christina. At one time or another, all have satisfied movie audiences' taste for pageantry, palace intrigue, powerful play-acting and dramatic history lessons.
The same satisfactions are now available to Chinese movie fans. The Empress Dowager, described as the most costly film project ever undertaken in the Far East, is a sumptuous, eye-filling spectacle that has a human, ultimately tragic story to tell.
At its centre is Tz’u Hsi, the empress who ruled China for nearly as long as Victoria ruled Great Britain. Cast in the role is Hong Kong actress Lisa Lu, who gives the aging monarch the kind of depth and fullness that Glenda Jackson gave to Elizabeth.
Both were woman who clung fiercely to power. But there the comparison ends. Elizabeth, a lusty, robust queen, presided over an ascendant empire.
Tz’u Hsi was an elderly schemer for whom time was rapidly running out. A once-powerful empire was crumbling around her.
The 19th century was an age of revolutions, and the whole world was changing. Her response to that change — or rather, her lack of it — would seal the fate of China for generations to come.
Last month [November, 1975], Vancouver filmgoers had a chance to see Chang Cheh’s Boxer Rebellion. At the time, I suggested that the writer-director’s approach had much in common with Cecil B. DeMille.
The Empress Dowager was written and directed by Li Han-hsiang, an artist who might more profitably be compared to David Lean. Like the director of Lawrence of Arabia, Li is interested in human power struggles. Though he stages an impressive,  sweeping spectacle, his emphasis is on the interplay of personalities.
Tz’u Hsi, ceremonially called “Old Buddha” throughout, retains her power by a simple ploy. She never allows an adult to ascend the throne. Since the 1862 death of her husband, the Emperor Hsien Feng, she has served as regent for two child emperors.
By 1894, Kuang Hsu (Ti Lung) is old enough to rule in his own right, and Old Buddha goes into retirement. Li’s film describes her struggle to retaln control over China and over a 20-year-old monarch eager to make both love and war.
Historically Kuang is remembered as a reformer. He found powerful allies in the court, among them treasury minister Weng Tung-ho (Cheung Ying) and foreign minister Li Hung-chang (Ku Feng), as well as within the royal family, represented by the crafty but ailing Prince Kung (Ho Li-jen).
Kuang’s problem is that no one understands him quite as well as his aunt. She knows that his rage to live is far more powerful than his desire to rule. For him, being a king is still a glorious game.
What Kuang doesn’t know is that Tz’u Hsi plays for keeps. Despite her age, she has a masterful grasp of sexual politics. When the young Emperor displays indifference towards Chin Feng  (Ivy Ling Po), his equally young Empress, Tz’u Hsi offers him his choice of concubines,.
Kuang is like a kid in a candy store. What he fails to realize — and what Old Buddha knows so well — is that every act of a king is politically significant. No choice is without its historic consequences.
And Kuang fails to choose wisely,
Director Li’s The Empress Dowager contains a number of surprises for Chinese movie fans. One, is a new, international standard of art direction. The overly familiar Shaw Studio backdrops, and their less-than-solid sets, have all been replaced by a Royal city worthy of a 1,000-year-old dynasty.
Another surprise is the total absence of martial artistry. Li manages to resolve all of his characters’ conflicts without resorting to kung-fu.
Drawing upon the full roster of Shaw contract players, Li has produced an all-star epic with an emphasis on acting rather than action. The Empress Dowager relies on a strong story rather than strong arms.

Afterword: Once the most dynamic force in Chinese cinema, the Hong Kong-based Shaw Brothers production studio was at the height of its power and influence in the mid-1970s. Its films were seen around the world, often in movie houses owned and operated by the Singapore-based Shaw Theatres. One of those theatres opened in 1971 at 254 Hastings Street, on the northern edge of Vancouver’s traditional Chinatown. It was managed by Lucy Shaw, a member of the family. By 1974, it had competition across the road on Main Street from a new Golden Harvest Theatre, an outpost of former Shaw producer Raymond Chow’s Golden Harvest Studios. For more than a decade, Vancouver audiences had access to the best of China’s films on big theatre screens.
Lisa Lu, the Peking-born actress who has the title role in The Dowager Empress, had already enjoyed a long career in Hollywood. Emigrating to the U.S. in her mid-twenties, she was seen regularly on TV and in the movies (albeit as the exotic Asian girl) starting in 1958. In 1960, she co-starred as James Stewart’s ally and love interest in the gritty Second World War drama The Mountain Road.
By the 1970s, she was shuttling between Hong Kong, where she was a major star, and Los Angeles, where she played showy supporting roles. Lu reprised her Dowager Empress role a year later in that film’s epic sequel, 1976’s The Last Tempest. She did it yet again for director Bernardo Bertolucci in his 1987 Best Picture Oscar-winning The Last Emperor, where her character is called Cixi, the currently accepted transliteration of Tz’u Hsi. The historic “Old Buddha” died in 1908 at the age of 72. Actress Lisa Lu, currently in her 90th year, was most recently seen in Dutch director David Verbeek’s feature An Impossibly Small Object, released last month (January, 2018) in the Netherlands.