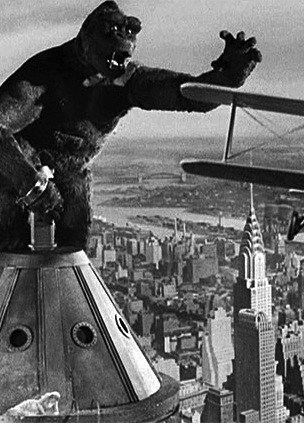 Restoration of the King


At its best, the modern cityscape is a work of art, a fantasy of forms realized in glass, steel and stone. Being marked today (August 10), Skyscraper Appreciation Day brings to mind lines from Robert Browning's 1855 dramatic monologue Andrea del Sarto: "Ah, but a man’s reach should exceed his grasp / Or what’s a heaven for?" It comes as something of a surprise, then, that the founder of this unofficial holiday, first celebrated in 2009, is more likely to quote Ayn Rand than a Victorian poet. A lawyer and politician, Thomas "Tom" Stevens has twice run for U.S. president as the candidate for the New York-based Objectivist Party, an organization that he founded in 2008 on February 2 (author Rand's birthday). Among Stevens's other enthusiasms are Free Trade Day (May 8, the birthdate of economist Friedrich Hayek), Space Exploration Day (July 20, the anniversary of the 1969 moon landing) and Individual Rights Day (August 29, philosopher John Locke's birthday). The date that he chose for Skyscraper Appreciation Day is the birthday of William Van Alen, the architect credited with designing the Art Deco Chrysler Building. The world's tallest man-made structure when it was completed in 1930, it was surpassed a mere 11 months later by the Empire State Building. By 1933, the latter structure was the choice of city visitors seeking an unsurpassed view, a group that included the monarch of Skull Island, King Kong.

Wednesday, November 19, 1980.
KING KONG. Written by James Creelman, Ruth Rose and Leon Gordon. Based on a story by Merian C. Cooper and Edgar Wallace. Music by Max Steiner. Directed by Merian C. Cooper and Ernest B. Schoedsack. Running time: 100 minutes. General entertainment. FOUR YEARS AGO [1976], PRODUCER Dino De Laurentiis thought he could improve on the original King Kong.
He thought wrong. His $25-million remake failed to impress film buffs and bored the socks off the 12-year-olds.
Despite its technical sophistication, Dino's King Kong lacked the dynamism, the drive and, yes, the dumb sentimentality of the original. A legend in its own time, the 1933 Kong remains a screen classic to this day.
Along about 1938, it passed into the realm of movie mythology. Before re-issuing its blockbuster to the theatres, RKO accepted the (binding) advice of the Hays office and deleted a number of scenes that the industry censor deemed "objectionable."
For the next 30 years, rumours abounded about the content of the missing footage.
The basic story remained the same. Believing native legends of a devil-god named Kong, moviemaker Carl Denham (Robert Armstrong) mounted an expedition to the South Seas. On remote Skull Island he discovered a lost world populated by prehistoric dinosaurs, human-sacrificing natives and a 50-foot-tall (15-metre) great ape, Kong.
The natives kidnap Denham's leading lady, blonde beauty Ann Darrow (Alberta-born Fay Wray), and present her to Kong with elaborate ceremony. After an unsuccessful courtship, Kong loses Ann to the ship's handsome first mate Jack Driscoll (Bruce Cabot).
Gassed into submission by resourceful impresario Denham's crew, Kong ends up shackled to a Broadway theatre stage where he is billed as "the eighth wonder of the world."
King Kong was given a major re-release in 1952 and, to the best of my knowledge, that was the last opportunity Vancouver audiences had to see it on the big theatre screen.
Eventually a distributor named Janus acquired rights to the film, restored the missing footage and is making the original "uncut" version available once again. Friday through Sunday [in November 1980] the Ridge Theatre is offering local audiences a film not seen here for more than 40 years.
At a press screening, it became apparent that most of the Hollywood censor's scissor work had been aimed at eliminating shocks and softening Kong's violent character.
For the first time, I saw Skull Island's swamp-dwelling apatosaurus — the dinosaur we used to call brontosaurus — actually chomping on director Denham's employees. A rampaging Kong is also seen devouring natives and, in two instances, deliberately stomping them underfoot.
The famous scene of Kong undressing Fay Wray is there, and it contains two surprises. One is the fact that it was obviously intended as comedy. Kong is not so much attempting to shred her skirt or remove her blouse as tickle her.
The second surprise is Miss Wray's lovely lace slip. (Remember slips?) Those production sketches that we've been seeing for years always showed more Wray and less lingerie.
The nastiest of the restored scenes has Kong searching for his reluctant girlfriend in New York Ciy. Hearing what he thinks is a familiar scream, he scales the side of an apartment block, reaches into a window and scoops an unsuspecting young woman from her bed.
When he discovers that it's the wrong girl, he just lets her go, allowing her to drop to her death on the pavement several hundred feet below.
Purists will be pleased to know that the Ridge is screening a clean 35mm print, and is doing so in the proper square-frame format.
Trivia fans will be delighted to catch sight of the film's co-directors, Merian C. Cooper and Ernest B. Schoedsack, making a cameo appearance during the film's unforgettable finale. The directors play the pilot and gunner of the Navy attack plane harassing the King atop the then newly-built Empire State Building.

Afterword: Standing next to Kong's corpse in the film's final moments, actor Robert Armstrong delivers the famous line: ". . . it wasn't the airplanes (that got him). It was beauty killed the beast." Beauty, of course, was represented by Fay Wray, born in Cardston, Alberta. A rancher's daughter, she lived to see Jessica Lang reprise her most famous role in the 1976 King Kong remake, directed by John Guillermin. She died on September 15, 2004, at the age of 96. Just nine days earlier (September 6), director Peter Jackson had called "action" on the first shots for his King Kong (2005), with Naomi Watts in the Ann Darrow role. Although she had been part of a half-century of cinema history — including starring roles in silent classics, sound-era comedies and made-for-TV movies — Wray was reconciled to the fact that she would forever be remembered as the girl in King Kong's hairy paw. She says as much in the title of her 1989 autobiography, On the Other Hand.
What's notable about King Kong is that he is a pure cinematic creation. Unlike Dracula, Sherlock Holmes or Superman, his story is not the screen adaptation of a book, stage play or comic. Along with Godzilla (with whom he would co-star in a 1962 Japanese feature), he made his place in modern mythology entirely through the magic of the movies. The magician who brought him to life was a stop-motion animator named Willis O'Brien, who did it all with an 18-inch (46-centimetre) model. RKO studio publicists insisted that the Kong we all saw on the screen was 50 feet (15 metres) high, but the ape's size actually shifted from scene to scene. The result was a film in which Kong, 18 feet (5.5 metres) on Skull Island, appears to be 24 feet (7.3 metres) tall in New York. By the time he reaches the top of the Empire State Building, Kong has grown to about 60 feet (18 metres). Movie magic indeed.
Over the years I've written my fair share of headlines (and enjoyed the work of other practitioners of the craft). Occasionally, some wit on the news desk will come up with a "hed" for a story that never was. Among my favourites is this topper for a report on one celebrity ape's plan to attend a Southeast Asian table tennis tournament: King Kong to Hong Kong for Ping Pong.