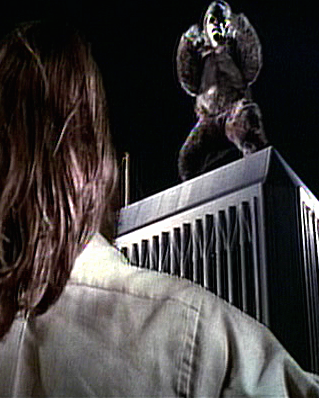 
No magic in Manhattan monkeyshines


In their search for extreme attractions, moviemakers have gone from A (for apes) to Z (zombies). Today (March 10), with the North American release of Kong: Skull Island, we’re back to A. The current reboot, Variety reviewer Owen Gleiberman tells us, is set in 1973, “just as Watergate is heating up and the Vietnam War is winding down.” That juicy tidbit leaves the door ajar for a discussion of primates and politics, inviting us to recall that, during his pre-presidential acting career, Ronald Reagan played second banana to a chimpanzee, the title character in 1951’s Bedtime for Bonzo. I’ll resist that temptation, because I know that Hollywood’s fascination with our evolutionary relatives goes back much further. It was Edgar Rice Burroughs's 1912 novel Tarzan of the Apes (first adapted to the screen in 1918) that suggested that great apes made fine nannies for orphaned English aristocrats. There have been more than 50 jungle lord movies in the years since, including the 2016 mega-budget feature The Legend of Tarzan. During the Cold War, Pierre Boulle’s 1963 novel Planet of the Apes (first adapted to the screen in 1968) suggested that primates other than man would inherit the Earth. The franchise that followed has produced eight features to date, with a ninth — War for the Planet of the Apes — due in July. In 1976, thanks to director John Guillermin, New York received a second visit from King Kong.

KING KONG. Written by Lorenzo Semple, Jr. Based on King Kong, the 1933 screenplay by James Creelman and Ruth Rose. Music by John Barry. Directed by John Guillermin. Running time: 133 minutes. Mature entertainment. THE BATTLE SEE-SAWS back and forth.
Here a scene suggests that director John Guillermin has a style and a vision that is going to work. There, another scene suggests precisely the opposite.
The original King Kong, first released in 1933, is a tough act to follow. Too tough. The new King Kong may be a more charming fellow, but his modern surroundings conspire to make a mammoth monkey out of him.
The remake reportedly cost in excess of $25 million (which is slightly more than the CFDC has been able to squander in nearly 10 years of dedicated money-burning).
When filmmakers spend that kind of money, filmgoers expect more than just a movie. They expect an experience, something that the new Kong fails to deliver.
The basic story, though updated, sticks remarkably close to the original movie. In both versions, explorers find and capture a huge ape on an uncharted Pacific Island.
The ape, known as Kong to the natives who worship him, falls hopelessly in love with the one female member of the crew, a circumstance that leads to his mighty downfall.
To modernize the story, screenwriter Lorenzo Semple, Jr. makes the explorers oilmen. The expedition is led by Fred Wilson (Charles Grodin), environmental rapist, corporate villain and vice-president of the Petrox conglomerate.
Once at sea, Wilson has to contend with a stowaway, a bearded Princeton zoologist named Jack Prescott (Jeff Bridges), an angry young man who gets to spit out all of the heroic exposition. The girl, a would-be actress named Dwan (Jessica Lang) is found adrift on a rubber raft, the sole survivor of a shipwrecked yacht.
In a career that spans more than two decades, the English-born Guillermin has proved himself an efficient action director. His most recent projects, 1972’s Skyjacked and The Towering Inferno (1974), suggest a style that might be the cinematic equivalent to painting's magic (or high) realism.
Its elements are a driving pace and a visual vividness that combine to hold audiences on the edge of their seats. His King Kong begins with that feeling, and the implication that the director sees the essential conflict as the head-on collision of a stainless-steel present with a furious, furry past.
To carry it off, Guillermin would have had to change his style the moment that his explorers enter the fog bank shrouding Skull Island. Back in 1939, The Wizard of Oz produced that effect by contrasting black-and-white reality (Kansas) with Technicolor fantasy (Oz).
Kong needed a similar shifting of visual and emotional gears, so that the more case-hardened audiences of the 1970s could turn on to the terror of the unknown in the giant ape’s world.
That was the new film’s moment of truth. Unfortunately, Guillermin fails to flip the switch. Instead of being magic and majestic, his Kong is merely massive.
After that, the thing becomes truly awful. Grodin, a self-indulgent performer at the best of times, turned into a caricature capitalist, a Babbitty foil for one and all.
Lange, a blank-faced fashion model making her motion-picture debut, manages to display three emotions during the film’s 133-minutes: stunned, dazed and out cold. It is possible to explain the great ape’s fascination — obviously he has never seen a Barbie doll before — but what possible attraction can she hold for a Princeton professor?
All right. It’s obvious that producer Dino De Laurentiis got shortchanged on his script. What about the special effects?
For $25 million we should expect perfection, right?
Wrong. And that is disastrous, because kids today are far more sophisticated about movie "magic” than were the audiences of 1933. A 12-year-old can spot that electric blue line around Dwan’s frightened body, and snicker about how Hollywood’s high-priced matte artists blew it.
Kong himself is beautifully done. He — meaning the small army of technicians who created and controlled him— works hard at being a charmer and has moments of almost Disneyesque cuteness.
His range of expressions and responses is far greater than that of Lange. With the exception of Bridges, who proves his worth as an actor by not making a fool of himself, Kong is the most accomplished performer in the ensemble.
Like Bridges, though, he’s not getting much support. At one point. he’s supposed to fight a subway-tunnel-sized serpent. Those rubber snakes that Tarzan wrestled for the Saturday matinee crowd were more realistic.
Kong’s triumph over it is not just hollow, it’s ludicrous.
So, unfortunately, is his movie. One of the few persons who seems to have given De Laurentiis his money’s worth was composer John Barry. The man who created the James Bond sound, Barry picks up where the original Kong composer, Max Steiner, left off. His terrific, heroic score saves several of the film’s borderline scenes.
Too bad it couldn’t save the movie. Taken as a whole, the new King Kong is a disappointment. It promises magic, and delivers only mechanics.

Afterword: Jessica Lange got better. Although she wouldn’t be seen on screen again until 1979’s All That Jazz, she took the down time to improve her range of expressions. In 1982, she was a double Oscar nominee for her performances in the drama Frances and the comedy Tootsie. She took home the prize for the comic turn, and has been an A-list star ever since. Lange’s co-star Jeff Bridges already had two Oscar nominations to his credit (for 1971’s The Last Picture Show and 1974’s Thunderbolt and Lightfoot), and was well established as an actor fond of offbeat roles. His performance opposite his real-life brother Beau, in 1989’s The Fabulous Baker Boys, is my personal favourite. It was for playing The Dude, in the Coen brothers comedy The Big Lebowski (1998), that Bridges became a generational icon. His single screen reunion with Lange to date was in the oddball, independent Bob Dylan feature, 2003’s Masked and Anonymous.
In common with the original, the 1976 King Kong remake was a product of its time. Petrox, the name of the oil company in the film, is said to have been based on the 1975 mania for Pet Rocks, a fad that had run its course long before the movie reached the screen. Following her rescue at sea, Jessica Lange’s Dwan character explains that she survived her yacht’s sinking because she was the only one not below deck watching 1972’s most notorious film, Deep Throat. Producer Dino De Laurentiis won his gamble and enjoyed a big payday when the box-office receipts were tallied. A 1986 sequel, King Kong Lives, also directed by John Guillermin, fared less well. A critical and financial failure, it ended Guillermin’s 37-year feature filmmaking career. A generation later, New Zealand’s best-known film artist, Peter Jackson, mounted his own expedition to Skull Island. With the success of the Lord of the Rings trilogy to his credit, Jackson had his pick of follow-up projects. He chose to remake the original King Kong, telling the 1933 story using 2005 special effects.