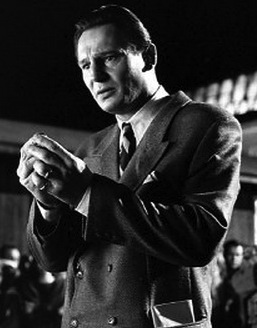 Oskar Schindler (Liam Neeson), who did so much, is struck by the realization that he might have done more, in Stephen Speilberg's Schindler's List.


Humanity recovered in the face of tragedy


He's not always the good guy, but his most memorable screen roles qualify him for a place in the Saviors R Us hall of fame. Born on this day (June 7) in 1952, Irish actor Liam Neeson made his movie debut in 1958 as The Saviour, Jesus Christ, in Christian filmmaker Ken Anderson's adaptation of Pilgrim's Progress. (Later, he'd be the voice of the lion Aslan, the Christ figure in the three Narnia films.) To date, Neeson has appeared in more than 70 features. His first starring role was in an obscure Irish film, 1985's Lamb, playing a conscience-stricken Christian Brother who breaks his vows to save a troubled child. Neeson's not-quite breakthrough, playing an actual superhero, came in Sam Raimi's 1990 Darkman. His comic-book heroism has since been demonstrated as the mentor to Obi Wan Kenobi (in the first Star Wars trilogy), and to Bruce Wayne (in the 2005 reboot Batman Begins), while his god-like presence (as Zeus) was exploited in a pair of movies with Titans in the title. In more down-to-earth saviour roles, he's played Irish national hero Michael Collins (1996) and Scottish legend Rob Roy (1995). He really rocked as Bryan Mills, the dad whose dedication to saving his kidnapped daughter knows no bounds (in 2008's Taken). She returns the favour in Taken2 (2012). Reeling Back today recalls his best-remembered saviour (and his Oscar-nominated performance) in Steven Spielberg's Schindler's List.

Afterword: My assessment of the film's commercial prospects was a touch off. It turned out that the mass audience was more than willing to turn out for a death-camp drama, if it was directed by Steven Spielberg. The $22-million Schindler's List returned $321 million to its producers. (By comparison, his $63-million popcorn picture Jurassic Park earned approximately $900 million during its initial release.) Spielberg's next film-of-conscience, the 1997 historical drama Amistad, would not do so well (earning about $44 million on production cost of $36 million). In this instance, T-rex (in the form of the $73-million The Lost World: Jurassic Park II) really did compensate for the box-office shortfall, with about $230 million in earnings.