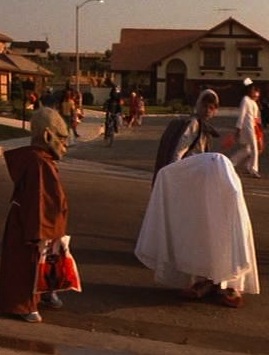 One Hallowe'en in suburbia, E.T. (in the ghost costume), encounters another trick-or-treater disguised as Yoda, the Jedi sage from a galaxy far, far away.


What would a strange visitor from another planet make of Hallowe'en? In 1982, a time when All Hallow's Eve was a less big deal than it is today, Steven Spielberg used the occasion to send his E.T. the Extra Terrestrial out into the suburban evening in the company of his new, young friends. Yesterday (Oct. 31), Reeling Back recalled two films in which in which Hallowe'en itself is a part of the plot. In Hocus Focus (1993), a mostly forgotten Disney film, a teenager accidentally brings three 17th-century witches back from Hell to take part in a modern Hallowe'en celebration. In George's Island, a truly obscure Canadian feature from 1989, a 10-year-old encounters pirate ghosts in Halifax Harbour. Today, the focus is on two blockbuster hits. In E.T., Hallowe'en is offered as a special secret shared by kids. Then, there is Tim Burton's animated feature, The Nightmare Before Christmas (1993), an utterly original movie musical in which Halloween Town's Pumpkin King is so charmed by what he sees in Christmas Town that he tries to "borrow" its spirit for his own realm. Imagination ensues.

Wednesday, June 9, 1982
E.T. THE EXTRA-TERRESTRIAL. Written by Melissa Mathison. Music by John Williams. Directed by Steven Spielberg. Running time: 115 minutes.  Rated General with the warning "occasional coarse language." KIDS KNOW.
Somewhere between The Exorcist's demonic child and the traditional Disney moppet lies the reality of childhood, a world of complex emotions, of wonder and of clarity.
Kids are honest. They experience the joy and the pain of seeing the world through fresh eyes, of feeling everything intensely, of discovering and of imagining.
Ironically, kids can't wait to grow up. They rush to become part of an adult world that longs for a return to its "lost innocence," its "better times. "
Occasionally, an artist grows to maturity with his child's sense of wonder intact. George Lucas did it with Star Wars (1977) and then joined forces with Steven (Jaws) Spielberg to produce the blockbusting Raiders of the Lost Ark.
While filming Raiders, Spielberg was shaping another idea, a story of childhood and loneliness, of a new close encounter of a most extraordinary kind. The result is E.T. the Extra-Terrestrial, a fabulous new fantasy opening Friday in five theatres locally.
A kids' picture in the very best sense of that term, E.T. begins with a view of a cloudless night sky. We come to ground in a California pine forest. There, in a clearing, is a space ship, an interplanetary Christmas tree ornament just descended from the second star to the right.
Although our view is obscured by tree branches, we catch glimpses of creatures emerging from the ship. In these important opening minutes, Spielberg must establish our attitude towards these aliens. Are they menacing monsters, or friendly representatives of The Force?
Listen to the music, provided by Spielberg's long-time collaborator John Williams. The sounds are soothing, pastoral. As a space creature's hand reaches out to collect a plant specimen, a rabbit looks on, unafraid.
Suddenly, there are intruders in the forest. Faceless, purposeful men arrive in a convoy of four-by-fours. Though apparently unarmed, their flashlights stab through the night with knife-like violence.
The aliens scurry back to their craft. In their haste for lift-off, one of their number remains marooned on the ground.
In a nearby suburban home, children are playing Dungeons and Dragons. Here, the little alien — a creation of Carlo Rambaldi, the effects technician who designed the saucerians for Spielberg's Close Encounters of the Third Kind — will find his earthly allies. E.T. is a space-age Peter Pan. Like James Barrie's boy who wouldn't grow up, Spielberg's alien meets three children.
Elliott (played by 10-year-old Henry Thomas) is the one who first finds and conceals E.T. The two establish an empathic link that will cause the boy one hilariously disruptive day at school.
Michael (played by l6-year-old Robert MacNaughton) is their first confidant. At first dubious of his little brother's tale, he becomes a believer and an important member of the kid conspiracy.
Finally, there is Gertie (the late John Barrymore's six-year-old granddaughter, Drew). She wasn't supposed to know about E.T., but it's a small house. She's still young enough to clap for Tinkerbell when her mother reads to her, but she also has a firm grasp on reality and one of the picture's best lines.
When she discovers E.T., her brothers try to convince her that "only kids" can see the large-eyed creature. lt's definitely no sale. "Give me a break," she snaps back at them, with obvious exasperation.
Like E.T., the kids are feeling isolated and alone. Dad has apparently run off to Mexico with someone named Sally, leaving Mary (Dee Williams), their mother, attempting to cope with single parenthood.
Adding to the drama is the fact that those mysterious, menacing men are still on E.T.'s trail. They are, perhaps, government agents, but they represent forces that are as alien to the kids as to their space-creature friend, and are rather less sympathetic.
Spielberg here works in a style that is the cinematic equivalent of painting's magic realism. Sharply observed characters, easy, natural performances and finely-tuned dialogue all contribute to the feeling of a more-real-than-real fantasy.
The sort of film that rekindles the sense of wonder, E.T. is packed with the sort of moments, images and touches that delight critics and critical adults.
Kids will just know.

AFTERWORD: It's all there in the moment that E.T. encounters Yoda on All Hallow's Eve. A timely joke, to be sure, as the new alien on the block meets the pop culture icon introduced two years earlier in the second Stars Wars film (The Empire Strikes Back). A directorial courtesy, certainly, as Steven Spielberg acknowledges his friend and occasional collaborator George Lucas as the master of cinema's science-fiction revival. More than that, though, their moment together underscores the importance of fantasy (Yoda) within the real world (E.T.) in which today's children must grow up. That their meeting happens during the increasingly important Hallowe'en festival is no accident. What better metaphor for the gentle horrors of inevitable change?.