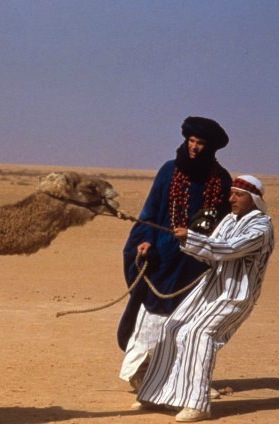 
One cinematic synonym for disaster


Be afraid. An incredible history of disasters has marked this day (April 14) as one on which to be very afraid. In the U.S., the Secret Service detail guarding the President will be on high alert, mindful of the fact that it was on this day in 1865 that Abraham Lincoln was shot. Radio stations with adult contemporary formats will play Celine Dion's 1997 recording of My Heart Will Go On at least once, with their DJs recalling the 1912 sinking of the RMS Titanic with the loss of more than 15,000 lives. Less likely to be noted is the 1986 sinking on this day of a Bangladeshi ferry in which a mere 200 died. Then there was 1935's "Black Sunday," the day that at least 20 intense dust storms blew across Oklahoma. Called "black blizzards" because they turned day into night, their occurrence on a single day was the historic event that inspired the name "Dust Bowl" for the region and an era. An early example of human activity with serious environmental consequences, it spurred scientific enquiry into climate change. Science, that pesky purveyor of inconvenient truths, took a hit on this day in 1984, when the Texas Board of Education began enforcing the requirement that state public school textbooks describe human evolution as "theory rather than fact". The action opened the way for proponents of myth-based "creation science" to insist on equal representation in the nation's classrooms. A more harmless sort of disaster is occasionally encountered in the movie theatre — a feature film that ends up being catastrophically wrong, an epic misfire like 1987's Ishtar.

Friday, May 15, 1987
ISHTAR. Music co-ordinated by John Strauss. Written and directed by Elaine May. Running time: 105 minutes. Mature entertainment with the B.C. Classifier's warning: occasional nudity and coarse language. OPERATOR, GET ME WASHINGTON. I have some information for the Congressional House-Senate hearings investigating the mucho millions that the U.S. solicited on behalf of Colonel Oliver North's Latino bandits.
I can identify Country X.
It's Ishtar.
That's right. Ishtar, the fictional Arab emirate located somewhere between Morocco and Libya, the setting for Ishtar, the motion picture.
Listen, Senator, it makes as much sense as anything that you've heard so far.
We know that mega-bucks went into it. Columbia Pictures, a vassal state of the Kingdom of Coca-Cola, originally budgeted $33.5 million for the property.
It's now said that they actually spent between $35 and $40 million.
So where did it go? You don't see it on the screen. Even given today's inflated production budgets, this picture looks like $300,000, tops.
Admittedly, the performers were paid insane salaries. Warren Beatty and Dustin Hoffman each pocketed $5.5 million.
They play would-be song writers Lyle Rogers and Chuck Clarke. A pair of all-American no-talents, they see themselves as the new Simon and Garfunkle.
In an effort to launch a show-business career, they accept a club date in Marrakech. In the process, they become involved with local revolutionary activist Shirra Assel (Isabelle Adjani, in for a paltry $2 million) and the machinations of CIA agent Jim Harrison (Charles Grodin, whose remuneration is unrecorded).
It's supposed to be a comedy. Elaine (Mikey and Nicky) May was paid an even million for her screenplay and an undisclosed amount for directing.
Beatty picked up an additional $500,000 for producing.
How is it? Don't ask, Senator.
Pictures this bad should be served with cranberry sauce.
It's supposed to be a tribute to all those Bob Hope-Bing Crosby road pictures. They're fondly remembered because Hope was a real comedian. Crosby could sing, and there was a genuine chemistry at work between them.
Neither Beatty nor Hoffman has any comic talent, and they can't sing. Worse still, May's screenplay is pointless, unoriginal and unfunny.
And really, it's just not possible to believe that the U.S. government would plot to suppress a popular rebellion in a foreign country, or that it would endanger the lives of a pair of hapless entertainers in the process.
We're talking stinker here, Senator. This picture is as dumb as Jewel of the Nile (1985) and lacks the saving grace of a Kathleen Turner.
It's so unappealingly dull that I started wondering just where those extra millions went.
The Ishtar that's currently on view here can't account for them.
Try asking Col. North.

Afterword: Wasn't it a time? In 1987, U.S. involvement in the Middle East was something that filmmakers could play for laughs, without a recent history of failed invasions and misconceived efforts at "nation building" getting in the way. It's hard to believe now how quaint (and possibly obscure) my frequent references to Lieutenant-Colonel Oliver Laurence North seem today. A hero to some, a satirical target to others, he was much in the news circa 1987 because of his involvement in some covert "diplomacy" that became known as "the Iran-Contra affair." Comically complex, it involved the sale of American arms to Iran to raise money to support a U.S.-backed insurgent group called the "contras" in its proxy war with the government of Nicaragua. It was the subject of joint congressional hearings, during which Iran was initially referred to as "Country X."  Speculation in the press about the identity of "Country X" provided me with my lead into the above Ishtar review. Two months later, a quote from North — "The world is a dangerous place" — started off my review of Superman IV: The Quest for Peace. Then there was the CIA operative Felix Rodriguez, who, testifying under oath, quoted North as telling him that "the old man (President Ronald Reagan) loves my ass." That quote helped me work Ollie into my 1994 review of Pulp Fiction.
Ishtar was not well received. Though I'm not in favour of  critics who review budgets rather than movies, in this case I became one, if only to draw the parallel between the excesses of creative accounting in the public and private sectors. Today, it's generally accepted that the picture cost $51 million and grossed just under $15 million. Although Elaine May previously had three moderately successful features to her credit, Ishtar brought her directorial career to an abrupt end.