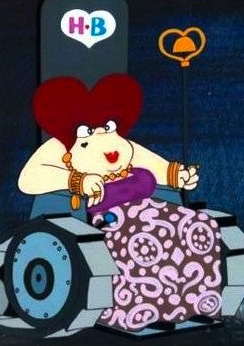 Tuesday, November 1, 1977.
VIP, MIO FRATELLO SUPERUOMO (Vip, My Brother Superman). Co-written by Attilo Giovanni and Guido Manuli. Music by Franco Godi and Johnny Gregory. Co-written and directed by Bruno Bozzetto. Running time: 79 minutes. General entertainment. CAST AWAY ON AN UNCHARTED island, Minivip, the world's least prepossessing superhero, is confronted by a huge, blue-coated villain. Engraved on the door panels of the villain's car are the initials H•B.
H•B? Well, cartoon fans know they could stand for Hanna-Barbera, those entrepreneurs of limited animation who are responsible for so much of American television's truly awful cartoon fare.
Bruno Bozzetto, the Milanese animator who made the feature Vip, My  Brother Superman, got his start in Italian TV. He'd certainly know about the U.S. cartoon factory, and it's a good bet that his story of the Vips deliberately parodies the style of their Saturday morning schlockers.
Vips, his picture explains in a bouncy prologue, are a race of supermen whose family tree reaches into pre-history. Unfortunately, its two current branches are lamentably mismatched.
Supervip, a mass of rippling muscles and good deeds, is a solid chip off the old block. His brother, Minivip, is less so. Small and ordinary to the point of inferiority, Minivip flies, but only haltingly.
There is still that question of H•B, though.
Well, it could be a respectful reference to Halas and Batchelor, the creative British cartoonists who proved that limited animation could also be an art form. In his most recent theatrical feature, 1976's Allegro Non Troppo, Bozzetto, 39, showed that he himself is a creative artist of their calibre.
In this earlier film, too, there are moments of dazzling creativity, especially in the animator's use of light and colour. The storyline of this 1968 feature sends Minivip off on an ocean voyage.
Bozzetto takes the opportunity to experiment, suggesting the mood of the cruise ship and the mystery of the deep with spare, evocative line drawings rendered in glowing, iridescent colours.
Within the storyline, H•B stands for Happy Betty. As a character, she is the absolute ruler of an isolated island and chief executive of a world-wide chain of supermarkets. As her poor, abused parrot explains:
"Happy, happy Betty, the super supermarket queen / Her super, super brain makes her super, super keen."
Betty is not a nice person. From her armoured, motorized throne, she plots to enslave the consumers of the world. After years of research she has developed a brain missile that will implant itself in the skulls of unsuspecting shoppers.
So controlled, the customer is forced to buy only Happy Betty-brand products. The only thing standing in her way are the Vips.
Can poor, undersized Minivip overcome Betty's weapons-happy, hunchbacked henchman? Can ever-reliable Supervip defeat her huge and horrible henchman?
Don't be silly. Of course they can. But not before Bozzetto and his musical collaborator Franco Gordi have had a chance to lampoon the art and aims of modern advertising.
In one wild flight, we are introduced to Betty's anything-for-a-buck board of directors. In another, we meet her research chief, a white-coated scientist with "Made in Germany" stamped on his oversized dome. He entertains us with a film-within-the-film showing how humans have very nearly become a race of automatons already.
Yet another comic highlight is Happy Betty's missile control. Almost totally automated, it is peopled by grinning green workers whose mindless toil fulfills every corporate executive's dream of maximum production at minimum cost.
It's hardly the sort of satirical comment that the Saturday morning hucksters would permit on the tube. In the theatre, though, Vip, My Brother Superman, is a sharp and tuneful cartoon comedy.

Afterword: "Bruno Bozzetto is unique in animation," film historian Bruno Edera wrote in his landmark study Full Length Animated Feature Films (Hastings House, 1977). Noting in his book that Bozzetto had "worked with John Halas in London (and) set up the largest studio in Italy," Edera went on to say that his first cartoon feature, 1965's  West and Soda, "marks the turning point for both Italian and European animation." Bozzetto's second feature, Vip, My Brother Superman, confirmed Edera's assessment. It was followed in 1976 by the film many consider the Milan-based animator's masterpiece, Allegro Non Troppo, a cheeky parody of Disney's Fantasia. In 1987, Bozzetto tried his hand at live-action direction; the result was the cartoon-inspired comedy Sotto il ristorante cinese, a picture that reached North America as Under the Chinese Restaurant. Much honoured in Europe — and occasionally in the U.S, where his 1990 cartoon Cavallette (Grasshoppers) was nominated for a best animated short Oscar — Bozzetto continues to generate new projects for television and the Internet. Like American animation legend Ralph Bakshi, he recently embraced the computer as a graphic arts tool. Celebrating his 77th birthday today, Bozzetto's personal website is well worth a visit.