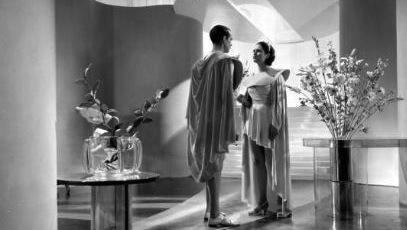 The look of 2036, as seen through the lens of a style-setting British science-fiction feature from 1936.


One hundred and fifty-seven years ago yesterday (August 2), Britain passed the Act Creating the Crown Colony of British Columbia. Today (August 3), we celebrate B.C. Day, a provincial holiday since 1974, that we're marking with a quiz based on sci-fi cinema's Britannic roots.

SINCE 1974, THE FIRST Monday in August has been the civic holiday known as B.C. Day. As ours is the only province to include British in its name, it's only right we take a moment to recall our imperial connections. Though the sun may have set on the actual empire, it is a truth universally acknowledged that Britannic science fiction and fantasy rules in this so-called American century.

1.    Boldly going where no motion picture had gone before, this style-setting 1936 English epic offered Toronto-born Raymond Massey flying to the rescue of all mankind in a screenplay by an acknowledged father of science fiction. Name him and name the book that he adapted for the screen.

2.    In his 1956 film debut, Zehner, Saskatchewan-born John Vernon was unseen, providing the voice of the omnipresent Big Brother. The film was directed by English sci-fi cinema pioneer Michael Anderson, who emigrated to Canada in the 1960s. Name the movie and the author of the novel upon which it is based.

3.    With special effects inspired by the NFB short documentary Universe and its narrator Douglas Rain in a key role, the shot-in-London 2001: A Space Odyssey

1.    H.G. Wells. Based on the 1933 novel The Shape of things to Come, director William Cameron Menzies Things to Come foreshadows the Second World War and manned space flight. The photo at the top of this page is from the film.

3.    Arthur C. Clarke, who expanded his 1948 short story The Sentinel for director Stanley Kubrick, in the process creating the character HAL 9000 (voiced by Winnipeg-born Douglas Rain).

Doctor Who (1996). Set in San Francisco, it starred Paul McGann as the eighth Doctor (with a guest appearance by the seventh Doctor, Sylvester McCoy).


The above is a restored version of a VCON 36 website quiz by Michael Walsh originally posted in 2011. For additional information on this archived material, please visit my FAQ.