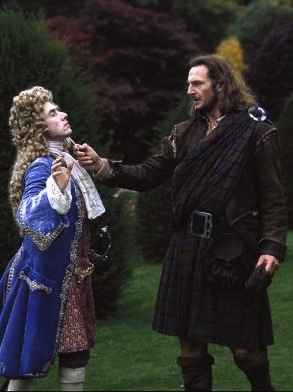 
Will they or won't they? Today (September 18), history will be made as just over four million Scots vote on whether Scotland should leave the United Kingdom. The question on the ballot is dead simple: "Should Scotland be an independent country?" A yes vote would dissolve a union that has existed in one form or another since a Stuart (James) succeeded a Tudor (Elizabeth) on the throne in 1603. Pollsters agree that the result is "too close to call," which means that controversy is very likely to accompany the outcome. In late June, Edinburgh's Dominion Cinema played host to an anniversary screening of 1995's Braveheart, the film some English editorialists blame for stoking the flames of the Yes movement. Though writer/director Mel Gibson has been diplomatically silent on the subject, three of the picture's principal performers (Brian Cox, Peter Mullan, Angus MacFadyen) have declared themselves in favour of "freedom." They joined such Yes vote celebrity supporters as Robbie Coltrane, Simon Pegg, Sean Connery and Willie (the school groundskeeper on The Simpsons). Quite enjoying the discomfiture of the London elites, embattled media mogul Rupert Murdoch Tweeted earlier this week that Scotland was “ready emotionally and politically” for independence. Given the encouragement such an outcome would provide to Quebec sovereigntists, Canada's prime minister Steven Harper is among the establishmentarians hoping the No vote prevails. While awaiting the results, Reeling Back recalls that other historic Scottish hero, Rob Roy.

Friday, April 7, 1995
ROB ROY. Written by Alan Sharp. Based on incidents in the life of Robert Roy MacGregor (1671-1734). Music by Carter Burwell. Directed by Michael Caton-Jones. Running time: 139 minutes. 14 Years Limited Admission with the B.C. Classifier's warning: some violence, occasional suggestive scenes and nudity. YOU CAN TELL a hero by what he says.
In Rob Roy, director Michael Caton-Jones's great, sweaty Highland adventure, good guy Robert Roy MacGregor (Liam Neeson) lectures his sons on the subject of honour. "Honour is what no man can give you and none can take away," he says.
"Honour is a man's gift to himself."
Villains, by contrast, glory in their utter lack of honour. Bad guy Archibald Cunningham (Tim Roth) responds sneerfully to a declaration of love by Betty (Vicki Masson), the housemaid he has gotten with child.
"Love is a dunghill, Betty, and I am but a cock who climbs upon it to crow."
It is also important how they say it.
As Rob Roy, the Irish-born Neeson speaks with a credible Scots accent. He reproduces the honest, upright burr of Sean Connery, the movies' greatest living hero.
Roth's Cunningham affects a mincing, aristocratic English accent. As historians and historical popularizers reassess the events that shaped our world, English imperialism is not coming off at all well.
Indeed, the English upper-class twit is looking more and more like a bred-in-the-bone villain. For all of his wigs and lisps, Cunningham is a superior swordsman, a heterosexual rapist, a sly tactician and a remorseless killer.
Director Caton-Jones is, of course, a Scot. Since making his feature film debut with the boisterously Brit-bashing Scandal  (1989), recalling the 1963 Profumo affair, he's tried his hand at a Second World War combat movie (Memphis Belle; 1990), a Capraesque courtship comedy (Doc Hollywood; 1991) and a boomer coming-of-age drama (This Boy's Life; 1993).
Noting, perhaps, the popular resurgence of historical romance novels, the West Lothian film-maker now offers us a big bold movie based on the life and legend of an actual 18th century Highlander. Though conceived as entertainment, Alan Sharp's generic screenplay is more true to the known facts than either Sir Walter Scott's 1818 novel or Disney's English-made Rob Roy: The Highland Rogue (1953), that featured Richard Todd in the title role.
(In 1954, Disney director Harold French was introduced to the Queen at a royal command performance of his Rob Roy. He's reported to have said to her, "it's a Western in kilts, Your Majesty.")
In mood, the Caton-Jones version is more like Michael Mann's 1992 The Last of the Mohicans remake. It opens with ranch foreman Rob leading a posse of six kilted cowboys up a mountain in pursuit of some misbegotten cattle rustlers.
The year is 1713 and Rob wants more out of life. "I'm getting too old for this lying wet-arsed in the heather chasing other men's cattle," he laments.
History buffs will recognize the date and immediately wonder how the politics of the English royal succession and the impending Stuart rebellion — the real Rob Roy was a commissioned Stuart freebooter — figure in the tale. The answer is, hardly at all.
Neeson's Rob lives by the traditional Hollywood hero's code. He loves his wife, the sexually adventurous Mary (Jessica Lange).
Though financially indebted to the wealthy Marquis of Montrose (John Hurt), Rob refuses to participate in the creepy Englishman's intrigues against the even more powerful Duke of Argyll (Andrew Keir). When the independent Rob takes to the hills, Montrose's slimy retainer Cunningham rapes Mary to dishonour the MacGregors and provoke a personal grudge match.
Caton-Jones's gritty, calculatedly coarse melodrama comes off sounding quite literary. The trick is in the casual use of a lot of archaic lewd language in the characters' everyday speech.
He gets additional points for casting a pair of Oscar honourees as the married lovers. Lange's recent win for 1994's Blue Sky lends considerable dignity to the scene in which she gropes under nominee Neeson's kilt, seeking something other than Schindler's List.
Actor Roth, last seen cutting loose in 1994's Pulp Fiction, has the most fun, though. Playing a character who is a bastard in every sense of the word, he gets to rob, kill and rape while maintaining a fastidiously neat personal wardrobe.
Pulp history for teen readers, Rob Roy is a hoot, man.

Afterword: 1995 proved to be the year of the kilted hero. Just six weeks after audiences first cheered Rob Roy, in which a Scots hero bests his arrogant English adversary, Braveheart made its debut at the Seattle International Film Festival. Produced and directed by star Mel Gibson, it told the story of William Wallace, and his part in the first war of Scottish independence (1296-1328). Gibson's line "tell our enemies that they may take our lives, but they'll never take . . . OUR FREEDOM!" entered the language, and his overwrought delivery has been a source of material for comedians ever since. While British critics dismissed his picture as arrant anglophobia, the American Academy showered it with honours, including best picture and director Oscars for Gibson. (The acting categories were conspicuously absent from Braveheart's 10 nominations. Rob Roy's Tim Roth was among the supporting actor nominees.) For my money, the film that best reflects Scotland's 21st-century aspirations is Vancouver-based director Charles Martin Smith's 2008 caper comedy Stone of Destiny. Based on a true story, it recalls the 1950 repatriation of the sacred Stone of Scone, stolen from the Scots in 1296 by England's Edward I. The exploit was planned and successfully carried out by Scottish students, who were ultimately arrested but never prosecuted. An Anglo-Canadian co-production, this lovely little picture's filming locations included Scotland, England, Wales and, yes, Vancouver, B.C.