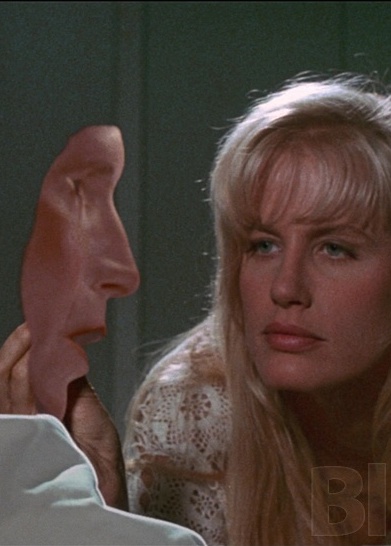 Documentary filmmaker Alice Monroe (Daryl Hannah) reaches out to help Nick Halloway (Chevy Chase), a man on the run from the C.I.A., in director John Carpenter’s 1992 feature Memoirs of an Invisible Man.

Seeing through the truth


Ethics are a matter of choosing sides


In 13 days, Canadians cast their ballots in 2019’s federal election. Born on this day (October 8) in 1943, actor Chevy Chase reminds us that transparency remains among the issues, just as it was in his 1992 feature film Memoirs of an Invisible Man.

MEMOIRS OF AN INVISIBLE MAN. Written by Robert Collector, Dana Olsen and William Goldman. Based on the 1987 novel by H.F. Saint. Music by Shirley Walker. Directed by John Carpenter. Running time: 99 minutes. Rated Mature with the B.C. Classifier’s warning: occasional very coarse language and suggestive scenes. NICK HALLOWAY (CHEVY CHASE) always was a bit transparent.
A 1980s kind of guy, he'd been both smart enough to succeed in business and slick enough to enjoy his success. Then, one Tuesday morning in March, he disappeared.
Now we see it: an accident in a government-funded research laboratory that causes an explosive suspension of the laws of physics.
Now we don't: Halloway, on the scene by happenstance, wakes up totally transparent.
There is just a bit more here than meets the eye. A John Carpenter film, Memoirs of an Invisible Man combines elements of romantic comedy and shock thriller to produce a matinee movie with an unsettling subtext.
Carpenter believes in shadow worlds. The creator of the original Halloween (1978), he has a reputation as a horror showman.
In fact, his artistic interests and directorial skills are more subtle than that. Carpenter's films — among them Starman (1984), Prince of Darkness (1987) and They Live (1988) — explore primal fears and exploit the fine edge of paranoia that lurks beneath the surface of urban America.
Here, his hero is a man on the run from his own government's most sinister agency. The CIA, in the person of David Jenkins (Sam Neill), sees Halloway as the "single most exotic intelligence asset in the world."
Jenkins, code-named "Scorpion," is introduced to us as an operative expert in defenestration. "Assassination," he tells us, or "anything at all, is ethical if you're on the right side."
Offsetting this chilly theme is the fact that actor Chase is a comedian, and invisibility is a concept dear to the hearts of playful special effects technicians.
Together, they've produced a moody game of hide and seek. Carpenter's Memoirs is suspense drama with lots of comic relief, drawing from an inventory of state-of-the-art visual surprises.
There is, of course, a romantic involvement. Hours before his "disappearance," Halloway enjoys a love-at-first-sight encounter with attractive Alice Monroe (Daryl Hannah), a fearless documentary filmmaker.
Later, she will become his ally and a target for CIA recruitment. "Be part of our team, Alice," says Jenkins.
The last time filmgoers were offered an invisible man movie — 1983's The Man Who Wasn't There, a 3-D feature with Steve Guttenberg and the wonderful Lisa Langlois — the emphasis was entirely comic.
Here, we're involved in a tragi-comic situation as Halloway assesses the life he once led. "The man has the perfect (spy) profile," says Jenkins. "He was invisible before he was invisible."
Memoirs of an Invisible Man is entertainment worth seeing through.

Afterword: A founding member of the Saturday Night Live troupe, Chevy Chase was among the bright lads who reshaped American comedy in the 1960s. He wrote for The National Lampoon and performed on its 1973-74 Radio Comedy Hour. When he became a movie star, he reasserted the NatLamp connection. Since 1983, Chase has played dedicated dad Clark Griswold in five National Lampoon's Vacation films. Politically, according to the Hollowverse website, Chase “is a vocal supporter of the Democratic party.” Of course that assessment was made in late 2012, and there’s not been a lot of reporting on the septuagenarian’s social views more recently. Earlier this year, he had the starring role in a Netflix feature called The Last Laugh. In it he played a former stand-up comedian coaxed out of retirement by his old manager (Richard Dreyfuss) for just one more farewell tour. Today (October 8) Chevy Chase is 76 . . . and you’re not.