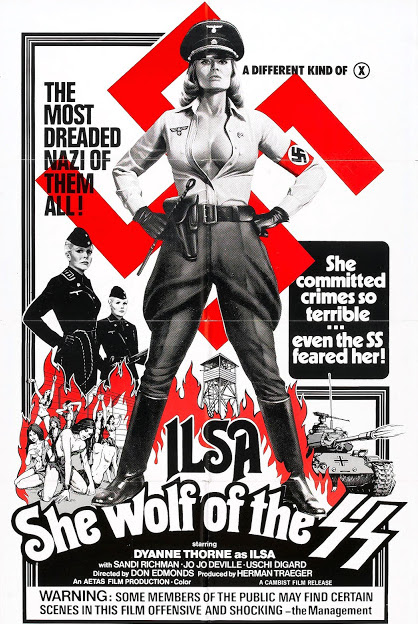 The U.S. theatrical release poster for 1975’s Ilsa - She Wolf of the SS features the warning that “some members of the public may find certain scenes in this film offensive and shocking."


On this day (August 19) in 1947, Ilse Koch, widow of the commandant of the Buchenwald slave labour camp, was sentenced to life imprisonment by a U.S. military court. Among the first of the Nazis to be tried for their war crimes, Koch became familiar to American newspaper readers as “the Beast of Buchenwald,” a woman whose story they followed with both horror and fascination. More than 25 years later, those same feelings would be stirred in movie audiences by a number of “nazisploitation” pictures inspired, in part, by memories of Koch. Some were taken seriously. Films such as Luchino Visconti’s The Damned (1969) and Liliana Cavani’s The Night Porter (1974) were deemed art because of their directors’ previous credits. More ambiguous was Caligula director Tinto Brass’s 1976 feature Salon Kitty. It may not have been art but it was Italian, which earned it a pass. And then there were the movies that the British called “Nazi nasties” — SS Experiment Camp, Deported Women of the SS Special Section (both 1976), The Beast in Heat and Last Orgy of the Third Reich (both 1977) — all banned in the U.K. for their unrelenting emphasis on sex and sadism. Among the things genre movie historians such as Robin Bougie agree upon is that the historic Ilse inspired the most influential of the nazisploitation features, a 1975 Canada-U.S. co-production and a notorious box-office success called Ilsa - She Wolf of the SS.

ILSA - SHE WOLF OF THE SS. Written by Jonah Royston. Music by “Horst Wessel”. Directed by Don Edmonds. Running time: 86 minutes. Restricted entertainment with the B.C. Classifier's warning: sex and brutality. “THIS IS SICK,” SOMEONE sitting in the row behind me said. “Let's go.”
On screen, Ilsa (Dyanne Thorne), kommandant of Medical Camp Nine, was describing the effects of an inflammable vaginal suppository to a nude female prisoner-patient. She then proceeded to use it, and the couple in the row behind left.
Sick.
Sadism, according to Webster, is “a sexual perversion in which gratification is got by torturing the loved person.”
Cinépix, the company distributing Ilsa - She Wolf of the SS, has a more succinct definition.
Sadism is a box office success.
According to Dan Ireland, manager of Vancouver's Eve Theatre, business is booming. Ilsa, he says, “is the biggest thing since The Best of the New York Erotic Film Festival.”
Saturday night the house was full when the feature started. It opened with a bedroom scene, relatively standard for Eve fare.
Unfortunately, despite the male participant’s best efforts, his buxom blonde partner (Thorne) is not satisfied. “You should have waited,” she says ominously.
He should have. When she emerges from the obligatory shower, she is wearing the sinister black uniform of an SS officer. She is joined by two blonde, black-clad henchwomen and together they drag him off to an autopsy table where he is summarily unmanned.
“Once a prisoner has slept with me, he will never sleep with a woman again,” snarls the She Wolf.
Sick. Unlike Love Camp 7,  a 1969 sex-exploition feature set in a German officers' brothel — it was shown in Vancouver in 1973 — Ilsa is in charge of a death camp. Its male prisoners are slave labourers; the female prisoners are experimental animals.
Ilsa uses both groups in pursuit of her life goals, which are (1) to prove that women can stand more pain than men, and (2) to satisfy her appetite for endless intercourse.
Ostensibly such films are presented as warnings and come complete with sanctimonious disclaimers. Ilsa's producers “hope that such heinous crimes do not occur again.” If challenged, She Wolf producer Herman Traeger [a pseudonym for David F. Friedman] could come up with an historical Ilsa.
Ilse Koch, “the Bitch of Buchenwald,” was the 40ish wife of camp kommandant Karl-Otto Koch, an SS colonel. Physically, though, the film’s Ilsa is a composite, having more in common with whip-toting SS girl Irma Gese, a beautiful blonde 18-year-old who tortured prisoners in Belsen and Auschwitz.
Neither the real Ilse nor Irma seem to have been involved with  medical atrocities.
What the film is doing, of course, is exploiting a sordid and distasteful trend currently showing up in Europe, a kind of avant-garde "Nazi chic." Encouraged by films such as 1974’s The Night Porter, a sub-cult has emerged to celebrate the demonic decadence of Hitler's Germany.
On one level, it is a relatively harmless fad, concentrating on Nazi-style clothing and regalia. On a deeper level, though, it is a sado-masochistic fantasy, one that is now finding expression in the popular arts.
Perhaps the Europeans have to go through a trivialization  process to finally put a grim phase of their history behind them. The film currently on view is not European, though.  It’s a Hollywood-style sexploiter, lacking either sensitivity or responsibility.
In common with last year’s The Texas Chain Saw Massacre, its only purpose is to turn the stomach and, possibly, turn on any genuine pervert who happens to emerge from the woodwork.
That's sick.
Some credit should go to the cast for not taking it too seriously. Though the film's full-chested star gives a chillingly realistic portrayal, most of the other performers content themselves with amateur-hour carpet chewing. In a less objectionable setting, Wolfgang Boehm’s portrayal of an over-decorated, porcine SS general would be quite funny.
Taking the entertainment value out of his performance is the banquet arranged by Ilsa in his honour. The table's centrepiece is a nude girl standing on a block of ice, a noose around her neck. As the evening wears on the ice melts, and the girl strangles to death, all for the general’s delectation.
Sick.
After the banquet, Ilsa complies with her superior officer's request for some urolagnial satisfaction (you can look it up in the dictionary). “Arrghhh!,” said a voice in the audience.  “I’m grossed out!”
An even bigger gross-out is the fact that this particular assault on good taste was bought and paid for with Canadian dollars. Montreal’s Cinépix financed the project.
Are they ashamed?
Not on your Iron Cross. Coming soon is a sequel: Ilsa, Harem Keeper of the Oil Sheiks.
*    *    *
ILSA IN OTTAWA — Earlier this year [1975], Ilsa - She Wolf of the SS was pulled out of an Ottawa, Ontario theatre when the police threatened to lay obscenity charges. Despite the fact that it had been passed by the province’s board of censors, the local crown attorney contended that it was obscene under the Criminal Code.
Ottawa atrocity buffs were not entirely unsatisfied, though. They just crossed the river to Hull, Quebec, where Ilsa, la louve de SS continued packing them in.

Afterword: Strictly speaking, the first “nazisploitation” feature was 1969’s Love Camp 7. Directed by “nudie” film pioneer Lee Frost, it was based on a script by its producer, Bob Cresse, who founded Olympic National Pictures in 1962 to make low-budget pictures for the inner-city grindhouse market. The pair’s first collaboration was on 1962’s The House on Bare Mountain, often cited as “the first monster nudie flick.”
As noted in the above review, Ilsa - She Wolf of the SS was financed by Montreal-based Cinépix Film Properties, a company launched in 1962 by John Dunning and André Link. It’s true that Ilsa was produced by an American — “Herman Traeger,” a pseudonym for David F. Friedman who, by no coincidence at all, had played a Nazi officer in Love Camp 7 — and filmed in Los Angeles, on the abandoned set of the 1965-1971 TV series Hogan’s Heroes. The script, however is credited to “Jonah Royston,” a pseudonym for John C.W. Saxton, a Canadian director and screenwriter whose many credits include the 1973 musical documentary feature Across This Land with Stompin’ Tom Connors. Ilsa’s success led to the production of three sequels: 1976’s Ilsa, Harem Keeper of the Oil Shieks, followed by Ilsa, the Wicked Warden and Ilsa, the Tigress of Siberia (both 1977). Announced (in 1976), but not made, was Ilsa Meets Bruce Lee in the Devil's Triangle. It really was an amazing run because, as actress Dyanne Thorne pointed out in a 2007 interview, “Ilsa gets killed at the end of every movie.”
The Ilsa movies earned the Connecticut-born Thorne cult-film star status, and probably doomed her career in mainstream pictures. Prior to being cast as director Don Edmonds’s She Wolf, she had worked in New York, Hollywood and Las Vegas for more than 15 years. Her experience included small parts in feature films, series television — among them a 1968 Star Trek episode — and on stage as a show girl. In 1974, she married musician and band leader Howard Maurer. A year later she accepted what would become her best-remembered role. A Las Vegas resident from the early 1970s, she combined performing with college classes, eventually earning a PhD in comparative religion. Together with her husband, she is an ordained minister, and today they are partners in A Scenic Wedding, a company that offers couples an outdoor “alternative to a chapel wedding.” They are licensed by Nevada’s Clark County to perform marriages, and do so as the Reverend Doctors Dyanne and Howard Maurer. The couple have incorporated her notorious past into their current spiritual life and attend several horror/exploitation movie conventions a year, where they officiate at marriages for fans who are happily joined together by the legendary Ilsa. Earlier this year, they were forced to cancel a scheduled appearance at the three-day Shock Stock event in London, Ontario, after Thorne suffered a fall from her horse. Apparently on the mend, she has promised to return for a future show.