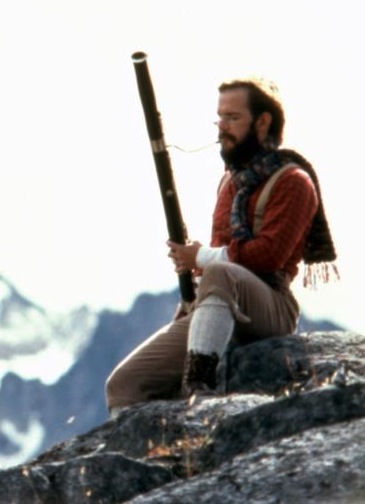 Charles Martin Smith plays a federal government biologist (and amateur bassoonist) whose experiences in the northern wilderness are based on those of Farley Mowat, as described in his book Never Cry Wolf.


Author and environmentalist Farley Mowat died Tuesday (May 6), just six days short of this 93rd birthday. Of the many tributes to his life and work, few match the simple eloquence of actor Charles Martin Smith's portrayal of the young biologist in the 1983 feature film Never Cry Wolf.

Monday, November 25, 1983.
NEVER CRY WOLF. Written by Curtis Hanson, Sam Hamm and Richard Kletter, with narration written by Charles Martin Smith, Eugene Corr and Christina Luescher. Based on the 1963 book by Farley Mowat. Music by Mark Isham. Directed by Carroll Ballard. Running time: 105 minutes. General entertainment  with the B.C. Classifier's warning: occasional nudity. WHAT HE HAS LEARNED is fascinating. More satisfying, though, is what Tyler (Charles Martin Smith) manages to re-learn.
Alone in the northern wilderness, he is a young biologist sent to observe the behaviour patterns of the local wolves. To his enduring delight, Tyler's studies have "restored my sense of wonder."
The world is full of wondrous things. Even so, remarkably few directors seem able to capture them on film. Former documentarist Carroll Ballard came close in his first feature, 1979's The Black Stallion.
Though the novel was standard youth-oriented adventure fare, Ballard's screen adaptation had a visual splendour that made it a memorable movie. Capable as it was, it still was a story that fell short of true wonder.
Never Cry Wolf, based on Farley Mowat's spritely memoir of his own wilderness adventure, is quite another matter. Here, Ballard really is able to demonstrate his talent for getting the magic off the page and onto the screen,
Shot on location in Northern B.C., Alaska and the Yukon, his film is one in which every scene is filled with a brilliant, unforced natural beauty. The story of a young man's discovery of his own abilities in the wild, it allows Ballard to show us the full range of his cinematic ability.
Tyler, a bespectacled federal government employee (based on the 28-year-old Mowat), has been sent out to collect data on canis lupus arcticus. The bureaucratic contention is that wolves are responsible for the depletion of the caribou resource, but documentation is necessary before Ottawa can order up a wholesale wolf slaughter.
More dedicated to the truth than departmental expediency, Tyler sets up an unorthodox study program. Breaking all the established rules, he comes to know one particular wolf couple, not as specimens, but as fellow living beings.
He also comes to know and respect the Inuit, learning much from Ootek (Zachary Xttimangnaq), an old hunter who enjoys a mystic relationship with the local lupine population. According to arctic legend,  Tyler learns, the caribou are a divine gift to man, and wolves "the tool (provided) to cut the sick from the herd."
Endless beauty, wonder and a sense  of genuine spirituality underscore a tale full of excitement and outdoors action. A treat for all ages, Never Cry Wolf is a movie not to be missed.

Afterword: Playing a fictionalized Farley Mowat changed Charles Martin Smith's life. Part of the young acting ensemble in director George Lucas's breakout film American Graffiti (1973), in which he played Terry "The Toad" Fields. But for the nearly three years spent filming Never Cry Wolf, Smith might have settled into a career as a reliable Hollywood supporting player. On the Official John Carpenter site, the webmaster quotes Smith as saying that "I was much more closely involved in that picture than I had been in any other film. Not only acting, but writing and the whole creative process." In the process, Smith decided to make his home in Vancouver. He made his own feature film directorial debut in 1986 (with the horror-comedy Trick or Treat), and counts among his television directing credits "Welcome to the Hellmouth," the pilot episode for Buffy the Vampire Slayer (1997). In a 2004 posting on the Playback website, reporter Mark Dillon noted that, since Never Cry Wolf's 1983 release, "(Farley) Mowat has called Smith a ‘blood brother'." Smith's own feelings for Mowat were demonstrated in his 2003 feature The Snow Walker, a film that he wrote and directed. An adaptation of Mowat's 1975 short story "Walk Well My Brother," it was among the most honoured Canadian films of its year, earning nine Genie Award nominations, including best picture, actor, actress, adapted screenplay and director.