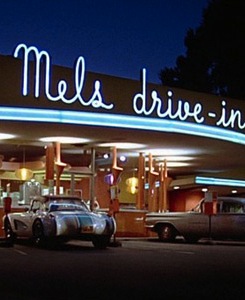 For one last night in 1962, Mel's Drive-in is at the centre of teen life in the California Central Valley world remembered by director George Lucas in American Graffiti (1973).


As the title suggests, American Graffiti is the July Fourth spirit distilled into a movie. A celebration of life, liberty and the happiness of pursuit, it is the American dream played out one warm August night in 1962. Four young men — college-bound Curt (Richard Dreyfuss) and Steve (Ron Howard); stay-at-homes John (Paul LeMat) and Terry (Charlie Martin Smith) — declare their independence. Together with three young women — Laurie (Cindy Williams), Carol (Mackenzie Phillips) and Debbie (Candy Clark) — they experience that moment when all things seem possible. Like the nation's own self-image, the picture is resolutely innocent, optimistic and likeable. American Graffiti, director George Lucas's breakout feature, spoke to its generation about freedom, responsibility and coming of age in transitional times, and has become the essential post-high-school comedy. Its genius lies in the fact that every one of the characters that drift through this night are real, a group of people that we either were or knew well. A deceptively random narrative is knit together by a spot-on soundtrack, a collection of period rock and pop tunes supposedly being broadcast by XERB radio's all-night DJ, Wolfman Jack. Set in California's Central Valley, this small-town movie is one of the cinema's most happy days.

Wednesday, May 24, 1978
AMERICAN  GRAFFITI. Co-written by Gloria Katz and Willard Huyck. Co-written and directed by  George Lucas. Running time: 112 minutes. General entertainment. SOUL. SOME MOVIES HAVE it. Others don't.
Take Saturday Night Fever, for example. When it first appeared it was full of cussin' and crude talk, with much emphasis on bodily functions.
Film classifiers in the U.S. and Canada agreed that there was just too much. The film received a Restricted rating. That meant that a large and lucrative market, the under-18s, was closed to the picture's producers.
Were they daunted? Not on your ticket stub.

That ad ran in Friday's Province. Recalled, recut and recycled, Saturday Night Fever is now playing in a squeaky-clean, Mature-rated version (otherwise known as the television sales print). No soul.
American Graffiti, on the other hand, is the very essence of soul. Fllmgoers who take in this reissued nostalgia classic are actually getting more movie for their money. The version currently on view is both louder and longer than the original.
Credit George Lucas, a man whose sense of style has made him a legend in his own time. The director of 1977's Star Wars, the top money-making movie of all time [1978], knows how to do things properIy.
"I learned most of what I know about directing from (Godfather director) Francis Ford Coppola," Lucas said in a recent interview, ''and one of the main things has been that casting is among the most important things . . . I spent about five months casting (for American Graffiti).''
Among those who won parts in his picture were Richard Dreyfuss, Ron Howard, Cindy Williams, Harrison Ford, Candy Clark, Paul LeMat, MacKenzie Phillips, Kathleen Quinlan and Suzanne Somers. All unknowns back in the summer of '73.
With a cast like that, you know that this is no ordinary rerelease. Before allowing Universal to reissue his picture (No. 15 on Variety's list of top-grossing movies), Lucas insisted on reinstating three scenes that were cut from the original release print, a move that adds two new characters and a song.
The first extra bit features New York poet John Brent, a man Lucas calls "a comedy legend.'' He plays a fast-talking used car salesman who tries to buy the Ron Howard character's car out from under Terry "The Toad" Fields (Charles Martin Smith).
The second features Terry McGovern as Mr. Wolfe, an officious teacher acting as a monitor at the freshman hop. He turns up to harass party crashers Steve Bolander (Ron Howard) and Laurie Henderson (Cindy Williams). "Omitting that scene made Steve a little more bland,'' Lucas says, ''and he needed all the help he could get.''
The ''new'' song is the Rodgers and Hammerstein standard Some Enchanted Evening. It is "sung" by Harrison Ford's Bob Falfa, who is doing his best to impress Cindy Williams's Laurie.
Before agreeing to the reissue, Lucas made a second demand. His movie ''was originally designed to be in stereo,'' he says. ''Why wasn't it? We didn't have enough money. We were a very low-budget film."
American Graffiti is now in stereo. Because George Lucas knows how to make a movie . . . Because he's got the kind of class that the Saturday Night Fever crowd couldn't begin to understand.

Afterword: With the exception of George Lucas, almost everybody was back for the 1979 sequel More American Graffiti. After Star Wars, Lucas took a 22-year-long break from directing, selecting the largely unknown B.W.L. Norton to guide his characters though the crisis-fraught years 1964 to 1967 featured in the sequel. Richard Dreyfuss, who achieved major stardom in the Steven Spielberg features Jaws (1975) and Close Encounters of the Third Kind (1977), did not join the reunion. Among those who did, Paul LeMat's character John Milner dies in a car crash, while Charles Martin Smith's Terry Fields goes missing in action in Vietnam. Their adult crises include marital strife between Steve and Laurie Bolander (Ron Howard and Cindy Williams), and some drug-related problems for Debbie Dunham (Candy Clark). In all, the picture did not deliver the fun and laughter that audiences expected.

See also: My 1978 review of The First Nudie Musical offered an interim answer to the question "whatever happened to all those wonderful kids from 1973's American Graffiti?"