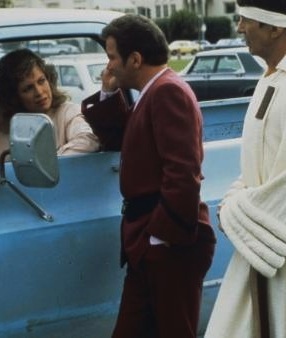 
Nimoy Directs us to a whale of a good time


Smoking is highly illogical. An acknowledged truth, of course, but when you phrase it in just that way, it could be a lyric from the title tune of Leonard Nimoy's 1993 CD Highly Illogical, a collection of songs from from his early years as a recording artist. Or, it could have been Vulcan Starfleet officer Spock's reaction to the news that the actor now has chronic obstructive pulmonary disease (COPD). “I quit smoking 30 years ago,” Nimoy announced to his Twitter followers two months ago (Jan. 29). “Not soon enough. I have COPD." He concluded with the advice "Grandpa says, quit now!” (The disease, which involves lung damage, is treatable but remains incurable.) His own "30 years ago" calculation takes us back to 1984 and suggests that he quit around the time he was directing his first feature film, Star Trek III: The Search for Spock. Located and resurrected, Nimoy's signature character would appear in three more features, and be the only member of the original ensemble in the 21st century reboot of the series, 2009's Star Trek and Star Trek Into Darkness (2013). Just four days younger than William Shatner, his equally tireless Star Trek co-star, Leonard Nimoy celebrates his 83rd birthday today (March 26). To mark the occasion, Reeling Back recalls the wonderfully whimsical feature film he directed in 1986, Star Trek IV: The Voyage Home.

Tuesday, November 25, 1986.
STAR TREK IV: THE VOYAGE HOME. Written by Steve Meerson, Peter  Krikes, Harve Bennett and Nicholas Meyer. Music by Leonard Rosenman. Directed by Leonard Nimoy. Running time: 118 minutes. General entertainment with the B.C. Classifier's warning: occasional coarse language and swearing. HELLO. IS THIS THE doctor?
Sorry to bother you at this hour of the morning, doc, but I've got a problem. I think I may be turning into a Trekkie.
I've never had this trouble before. I sat through the first three Star Trek features and then, more in sorrow than in anger, calmly reported upon their multiple deficiencies.
Lord knows, I'm no fan. I realize that Star Trek IV: The Voyage Home is just another reworking of the old unstoppable-alien-threat-to-Earth plot, warmed over with a time-travel twist.
Even so, I thought it was terrific. Director Leonard Nimoy, working from a sharp, knowing script by Steve Meerson, Peter Krikes, Harve Bennett and Nicholas Meyer, has reworked the essential formula into a fine adventure-comedy. They've come up with this year's Back to the Future.
It opens with Star Fleet's disgraced Admiral Kirk (William Shatner) returning to Earth with his former bridge crew — Spock (Nimoy), McCoy (DeForest Kelley), Scott (James Doohan), Chekov (Walter Koenig), Sulu (George Takei) and Uhura (Nichelle Nichols)— to stand trial for the loss of the Enterprise during their unauthorized Search for Spock (1984).
Finding the home planet in peril, they quickly conclude that the only way to save it is to go into "time warp" and head for "the extremely primitive and paranoid culture'' of late 20th century San Francisco. Here "nobody pays attention to you unless you swear every other word," Kirk advises Spock.
"You find it in the literature of the period."
Funny? I'll say. I nearly fell out of my chair when the Russian-accented Chekov politely asks a downtown policeman for directions "to the U.S. naval base in Alameda," adding that  "We're looking for nuclear wessels."
As the crew fans out on separate missions, every one of the familiar performers has an opportunity to step into the spotlight and play off his or her well-established character. Among the memorable moments are Dr. McCoy's encounter with "modern" medicine and engineer Scott's conversation with a computer mouse.
Working from a story idea by Bennett and Nimoy, the writers managed to work some deft social satire and much self-mockery into a plot that adheres to the series conventions, offers a timely ecological message and does it all within the constraints of a General rating.
Perhaps I've always been a closet Trekkie, doc. I know I loved the new, THX sound-enhanced Star Trek IV.

Afterword: Not mentioned in the above review was the solid contribution of actress Catherine Hicks, in the role of Dr. Gillian Taylor. The plot of the film — known to some fans as Star Trek Voyage to Save the Whales — turns on the fact that the threat to earth in 2286 seems to be signalling to an extinct species: humpback whales. Discovering two such creatures in 20th century San Francisco's Cetacean Institute, Kirk comes up with a plan to bring them back to the future. In the process, he is smitten with the institute's feisty female marine biologist. As were we all. Hicks, whom I first noticed as the pretty girl Bill Murray leaves behind in The Razor's Edge (1984), had two time-travel films to her credit in 1986. (She has a supporting role opposite Kathleen Turner in Francis Ford Coppola's Peggy Sue Got Married.) Although feature film stardom eluded her, she did have considerable success on television, most conspicuously as wife and mother Annie Camden, top billed co-star during the 11-season run of the WB network's 7th Heaven (1996-2007), U.S. television's longest-running prime-time family drama.