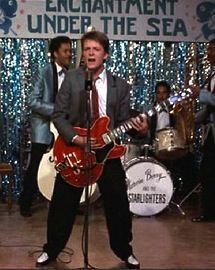 Marty McFly (Michael J. Fox) rocks out as if his very life depends upon it, which it does in director Robert Zemeckis's 1985 time-travel comedy Back to the Future.


Making it Stateside a Canadian tradition


It's Canada Day (July 1), and to mark the occasion Reeling Back offers three polite cheers for that most Canadian of entertainment traditions, the performer who makes it big by making it in the United States. There are enough familiar examples to fill a book, including three who were born on the nation's official birthday. Bilingual beauty Genevieve Bujold, born on this day (1942) in Montreal, made it in the early 1970s, achieving international stardom, a best actress Oscar nomination (for Anne of the Thousand Days) and a Time magazine cover. Ottawa-born Dan Aykroyd (1952) followed a decade later, making his all-American mark as one of the two iconic Blues Brothers, then one of the three classic Ghostbusters. In Canada's centennial year (1967) Pamela Anderson was born in Ladysmith, B.C. The athletic Anderson found fame, following a 1989 Playboy magazine cover, during seven seasons on the beaches of Baywatch. She was notorious as the wife of bad-boy rocker Tommy Lee. That said, today's applause goes to someone not born on July 1, former Edmontonian by way of Burnaby Michael J. Fox. For the next three days we'll cheer his triple-header Hollywood success, the story of Marty McFly. It begins with 1985's Back to the Future.

Wednesday, July 3, 1985.
BACK TO THE FUTURE. Co-written and co-produced by Bob Gale. Music by Alan Silvestri. Co-written and directed by Robert Zemeckis. Running time: 114 minutes.  Mature entertainment with the B.C. Classifier’s warning: occasional swearing. THE HITS ARE STARTING to register. The laughter will echo for years.
Precisely as predicted in this space seven years ago [1978], Chicago-born Robert Zemeckis has become a major force in screen comedy. His Back to the Future is, quite simply, the funniest film of the year to date.
Working with his regular writing partner Bob Gale, Zemeckis tells the tale of a time-traveling teen. For 17-year-old Marty McFly (Michael J. Fox, the Canadian-born TV star whose own Family Ties are in Burnaby) the future looks grim.
Marty’s father George (Crispin Glover) is a nerd who allows himself to be humiliated by his overbearing supervisor Biff Tannen (Thomas F. Wilson). His mother, Lorraine (Lea Thompson) is a humourless prude who tipples on the side.
Fortunately, Marty has something of a soulmate in wild-eyed Dr. Emmett Brown (Christopher Lloyd), operator of an independent “24-hour scientific service.” A man with a sense of style, Doc Brown has just finished customizing his DeLorean to speed through time.
Well, before you can say “Herbert George Wells,” Marty is exploring his home town as it was in November, 1955. In short order, he meets the awkward 17-year-old George McFly, and accidentally prevents George’s fateful meeting with ripe, young Lorraine Baines.
Although Marty looks up Doc Brown for help in getting back to his future, he soon realizes that if he doesn’t see to it that his prospective parents get together, there won’t be any future for him to return to.
Marty’s problems are complicated by the fact that the teenaged Lorraine is breathing heavily in his direction. George, meanwhile, is afraid that he’ll miss his “favourite television show, Science Fiction Theatre.”
The freshest, most inventive comedy since Ghost Busters (1984), Zemeckis’s picture is a sharply observed exercise in screwball nostalgia, a film brimming over with clever characterizations and inspired asides. A would-be rock guitarist in his own time, Marty gets the opportunity to perform at George and Lorraine’s high school prom along with Marvin Berry (Harry Waters, Jr.) and the Starlighters.
Asked for an encore, Marty obliges with a “golden oldie,” the 1958 hit "Johnnie B. Goode." While he’s on stage, the bandleader makes a surreptitious phone call.
“Chuck, it's Marvin. Your cousin, Marvin Berry. You know that new sound you’re looking for? Well, listen to this!”
Like Zemeckis’s first film, the hysterically funny I Wanna Hold Your Hand (1978), Back to the Future was executive produced by Steven Spielberg. The two met shortly after Spielberg made his own feature debut, while Zemeckis was still a student at the University of Southern California.
Together with Gale, Zemeckis scripted Spielberg’s disappointing 1941 (1979) and his own second picture, Used Cars (1980). His directorial career finally took off last year [1984] with the release of the adventure-comedy Romancing the Stone.
A brilliantly original comic fantasy, his current film should be just as successful. Back to the Future confirms that Zemeckis’s time has come.

Afterword: At the time that this review was written, my focus was less on the Canadian content (Michael J. Fox) than the career arc of director Robert Zemeckis. I'd been impressed by his first three films, and couldn't help crowing immodestly when Back to the Future justified the praise that I had heaped upon him in previous reviews. It just got better when, three years later, his Who Framed Roger Rabbit (1988) took his talent for screwball nostalgia to dizzying heights, as he realized a crossover of the Disney and Warner Brothers cartoon traditions in a film that combined animation and live action to tell a story with an underpinning of social commentary. After the two Back to the Future sequels (1989, 1990), though, he lost me. His interest in special effects seemed to overwhelm his empathy for characters, making 1992's Death Becomes Her a disappointment. Its six Oscar wins notwithstanding, I found little to like in Forrest Gump (1994). Fox, by contrast, just became more interesting both as an actor and a person. His work with such directors as Paul Schrader (Light of Day; 1987), Brian De Palma (Casualties of War; 1989), John Badham (The Hard Way; 1991) and Michael Caton-Jones (Doc Hollywood; 1991) will be the subject of future Reeling Back postings.