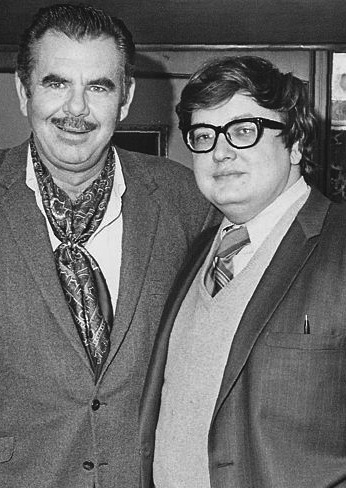 Photographed in 1970, director Russ Meyer (left) collaborated with Roger Ebert on three screenplays, including 1979's Beneath the Valley of the Ultra-Vixens.

Sex and the single critic


In addition to reviewing films, Roger Ebert took the occasional screenwriting assignment. Born on this day (June 18) in 1942, Ebert worked with his friend, director Russ Meyer, and together they produced such pictures as 1979's Beneath the Valley of the Ultra-Vixens.

Thursday, June 12, 1980.
BENEATH THE VALLEY OF THE ULTRA-VIXENS. Co-written by R. Hyde (Roger Ebert) and B. Callum (Russ Meyer). Photographed, edited, produced and directed by Russ Meyer. Running time: 93 minutes. Restricted entertainment with the B.C. Classifier's warning: sex comedy, frequent nudity and sex. ACTOR STUART LANCASTER IS an archetype. Sitting in coveralls behind the wheel of his working man's van, he is an American Gothic.
Lancaster is a commentator, the man who introduces "your neighbours" and acts as our guide to "Small Town, U.S.A." But for the fact that he is part of Russ Meyer's acting stock company, his role could have been played by Lorne Greene.
This, however, is Beneath the Valley of the Ultra-Vixens. Its promotion emphasizes bosoms, its plot the problems of a young man with a preference for "unnatural sex" in a world where the women are unfailingly enthusiastic for everything else but.
Lamar Shedd (Ken Kerr), correspondence-school student and junkyard worker, has a problem. It costs him his job and threatens his marriage in film auteur Meyer's latest satirical sally into the American heartland.
Auteur? Did he actually use the word auteur to describe the one-time king of the nudies?
Yes, I did. As far as I'm concerned, Meyer is right up there with Chaplin and Keaton (and rather higher than either Woody Allen or Mel Brooks).
In his 1968 book, The American Cinema, critic Andrew Sarris described a first-rank auteur as follows:
"These are the directors who have transcended their technical problems with a personal vision of the world. To speak their names is to evoke a self-contained world with its own laws and landscapes. They were also fortunate enough to find the proper conditions and collaborators for the full expression of their talent."
Please notice that there's nothing in there about being anguished, arty or even foreign. Nor is there any restriction on the sort of subject matter to be explored in the auteur's world.
Since 1959, Russ Meyer has created a body of work and evolved a comic vision. While social scientists natter on about our "sex-obsessed" society and advertising's use of the sex urge to sell everything from booze to burial vaults, Meyer has been portraying a world in which the fantasy is true.
In his films, those bigger and better advertising images come alive, and sex obsession is a way of life.
Meyer continues the put-on in person. He knows how to generate headlines, so to naive interviewers, he will admit his "obsession with breasts. I just love big tits."
The word "tits" is, in fact, personal shorthand, a code that the director shares with his friend and co-scenarist, the Pulitzer Prize-winning Chicago film critic Roger Ebert. For them it defines an attitude toward sexual comedy, and describes a style that is at once consistent, cartoonlike and attention-grabbing.
The style, of course, is not the man. That there is a style, though, identifies the man as a true auteur.
In his current film, co-written by Ebert (as R. Hyde), the title is literally true. Lamar's problem is that he insists on taking his pleasure "beneath the valley of the ultra-vixens" and they in turn, work hard to "straighten him out."
After a visit from Semper Fidelis (Michael Firm), the local Federico's of Wisconsin salesman, Lamar's indefatigable wife Lavonia (Francesca "Kitten" Natividad) develops a plan. Turning herself into strip-teaser Lola Langusta ("hotter than a Mexican's lunch"), she attempts to seduce her own husband.
"You'd think this guy would recognize his own old lady." interjects our commentator. "I guess what you have to keep in mind here is that we're dealing with a guy who only has an IQ of 37."
Sincerely troubled, Lamar also seeks help from dentist-cum-marriage counselor Asa Lavender (Robert E. Pearson), and visits the studios of Radio DIO, "100,000 watts of faith healing power," for an immersion session with evangelist Eufaula Roop (Anne Marie). Needless to say, Meyer makes full use of the sexual comedy inherent in every situation.
Like Chaplin and Keaton, Meyer is a chronicler of human conditions. Like Brooks and Allen, his comic tools are overstatement, parody and satire, tools shaped by his own encyclopedic knowledge of film and a particular view of life and cinema.
It's possible to view Meyer's films as little more than slick sexploitation. Many filmgoers do, and to them he delivers a full measure of flesh and fantasy.
It's also possible to see in his work a razor-sharp vision of a wild, wacky, crotch-level world. That's where the real fun begins.

Afterword: In November 1985, director Russ Meyer was the subject of a feature interview written by Chicago Sun-Times film critic Roger Ebert. In the piece, Ebert discussed the filmmaker's life and career, mentioning the films Beyond the Valley of the Dolls and Beneath the Valley of the Ultra-Vixens. What he neglected to mention was the friendship that the two men had enjoyed for some 16 years, or that he had collaborated with Meyer on the screenplays for both those films and a third feature, the 1976 comedy Up!. That untold story began in 1968, when the then-27-year-old movie reviewer wrote a letter to the editor of the Wall Street Journal, commenting on an article the financial paper had run on the filmmaker's work.
According to Jimmy McDonough, the author of Big Bosoms and Square Jaws: The Biography of Russ Meyer, King of the Sex Film; 2005): "Eagle-eyed Meyer took notice of the dispatch and wrote Ebert an appreciative note, suggesting they meet." They did meet, and they hit it off. Following the impressive financial success of Meyer's independently-produced Vixen!, 20th Century Fox hired the director to create a sequel to its 1967 success, Valley of the Dolls. According to another Meyer biographer, David K. Frasier (Russ Meyer — The Life and Films; 1990): "One of the first and one of the best decisions Meyer made was to hire a young Chicago Sun-Times film critic to help him write the screenplay . . . Roger Ebert took a leave of absence from his paper. He moved to Hollywood where he and Meyer cranked out the screenplay to (1970's Beyond the Valley of the Dolls) in six weeks of 10 hour days."
A bright guy, Ebert did not give up his day job. Though he collaborated with Meyer on two more screenplays — 1976's Up!, using the pseudonym Reinhold Timme, and 1979's Beneath the Valley of the Ultra-Vixens (as R.Hyde) — he preferred the celebrity of being an important critic to the invisibility of a studio scribe. The friendship that the two shared will be the subject of Russ & Roger Go Beyond, a biopic first announced in 2014. The story of the making of Beyond the Valley of the Dolls, it remains "in development" as of mid-2016. Currently Will Farrell and Josh Gad are set to play the Russ and Roger roles. Meyer died in 2004 at the age of 82. Ebert followed him in 2013, aged 70.