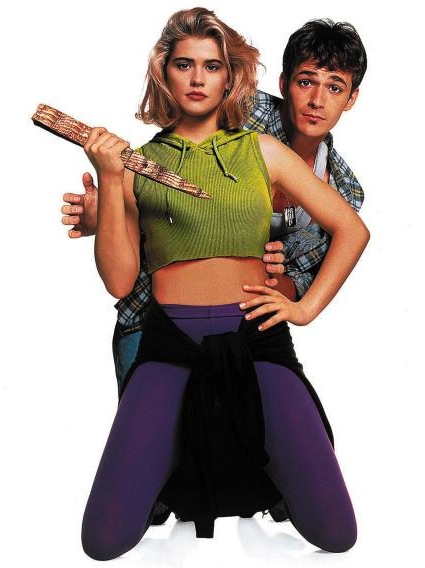 Pike (Luke Perry) understands that behind every great Slayer like Buffy (Kristy Swanson) there cowers a thoroughly smitten man.


Swanson stakes out her place in Slayer history


Film, it's often said, is a collaborative art. Occasionally, film criticism can be as well. One of my best memories of movie reviewing is the day in 1992 that I shared my newspaper column space with my teenaged daughter. The subject of our collaboration was the cleverly titled Buffy the Vampire Slayer. At the time, neither of us imagined that screenwriter Joss Whedon's creation would be anything more than a summer comedy, one among many pitched to the young adult audience. Already into my 20th year on the film beat (and no vampire fan), I was counting on her to bring a fresh perspective to our piece. Because she had quite literally grown up in movie houses, I had every confidence in her critical eye. And she nailed it. Not just that, but she saw what was to come. "Young women everywhere have a new role model," she wrote at end of her portion of the review. Five years later, Whedon would take his "chosen one" to television and fulfill that prophecy, producing seven seasons of game-changing entertainment. To say that Pauline Walsh's dad is proud would be an understatement.

Friday, July 31, 1992.
BUFFY THE VAMPIRE SLAYER. Written by Joss Whedon. Music by Carter Burwell. Directed by Fran Rubel Kazui. Running time: 87 minutes. Rated Mature with the warning "occasional violence and suggestive language."
WE AGREE.
Pauline, my soon-to-be-16-year-old daughter, likes Buffy the Vampire Slayer. So do I.
We have different reasons, of course. There is, after all, a generation gap between even the most perfect parents and their kids.
Pauline is going through her Stephen King phase. She's particularly keen on vampire stories. The Lost Boys (a movie that combines "cute guys" with the undead) is one of her favourites.
In short, she represents this picture's target audience. With that in mind, I asked for her review of the summer's most cleverly titled comedy.

By PAULINE WALSH
Los Angeles is crawling with vampires, and only one person can rid the city of this horrible infestation. BUFFY the Vampire Slayer.
Buffy (Kristy Swanson) is your normal, everyday teeny-bopping high school cheerleader until Merrick (Donald Sutherland) enters her life and tells her that she is "the Chosen One" to slay the vampires and rid the world of evil.
Paul Reubens (last seen as Tucker Cobblepot in Batman Returns) is the humorous yet demented Amilyn, the 1,200-year-old assistant of Lothos (Rutger Hauer), the vampire king. Pike (90210's Luke Perry) is the young man that Buffy falls for, after he faints into her arms.
While no Fright Night, Buffy the Vampire Slayer is a movie for comedy and vampire movie lovers alike. It's a horror-comedy-romance with some amazing gymnastics thrown in for good measure.
Young women everywhere have a new role model. (THREE AND A HALF STARS )

Dad's turn:
About one script polish away from being a first rate satirical comedy, director Fran Rubel (Tokyo Pop) Kazui's feature introduces its teenaged heroine to life beyond the mall. Descended from a long line of medieval "slayers," Buffy lives in the Southern California of "The Lite Ages."
Informed of her "destiny" by the wonderfully sepulchral Merrick, she resists. "All I want to do is graduate high school, go to Europe, marry Christian Slater and die."
Brought face-to-face with the vampire menace, athletic Buffy discovers that not only can she make a difference, she wants to. Within the with-it comedy is a solid core of optimism about the sort of future that our daughters (and sons) can make for themselves.
A breakthrough role for hard-working supporting player Swanson and a new direction for the troubled career of Paul (Pee-Wee Herman) Reubens, Buffy the Vampire Slayer is a flip, funny addition to teen culture. ( THREE STARS )

The above is a restored version of a Province review by Pauline and Michael Walsh originally published in 1992. For additional information on this archived material, please visit my FAQ.

AFTERWORD: In a review notice bursting with names, one name, "Joss Whedon," is conspicuous by its absence. The ginger-haired genius, who would go on to become a multi-media master — television, comic books, motion pictures and the Internet — has also become a serious cultural preoccupation of mine. Since 1999, I've moderated a panel at VCON, Vancouver's annual science-fiction and fantasy convention, examining the latest trends in the Whedonverse. Among those trends is some serious scholarly attention, resulting in the recognition of "Buffy Studies" as an actual academic discipline. When the Whedon Studies Association held its most recent Slayage Conference at the University of British Columbia over four days in July, 2012, my wife and I just had to attend.