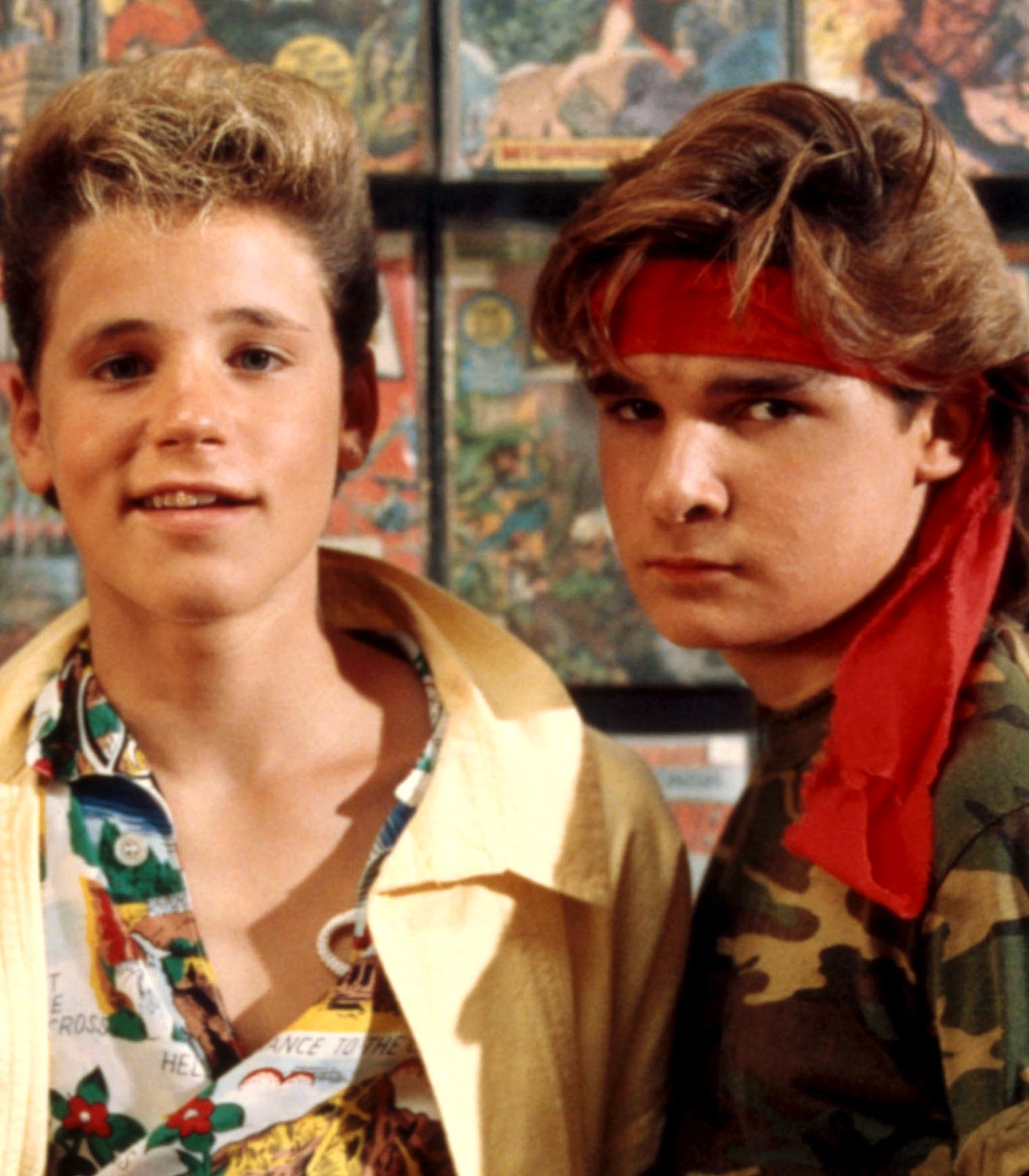 For Sam Emerson (Corey Haim, left), a comic shop meeting with Edgar Frog (Corey Feldman) will be the beginning of a life-long friendship in 1987's The Lost Boys.


Not every tale of Canadian success in Hollywood has a happy ending. Corey Haim, born in Toronto on this day (December 23) in 1971, had the sort of winning personality that propelled him to fame in his teens. He played the title role in 1986's Lucas, a coming-of-age comedy, and went on to steal scenes from the top-billed talent in the stylish vampire thriller The Lost Boys (1987). On the latter project, he struck up a friendship with fellow actor Corey Feldman. The two became creative collaborators, appearing together in six more features, including 1988's License to Drive, Dream a Little Dream (1989), Blown Away (1992), National Lampoon's Last Resort, Dream a Little Dream 2 (both 1994) and Busted (1996). The tabloids that celebrated him as a teen idol were relentless in covering his later struggle with drugs, and his entry into rehab programs at least 15 times between 1989 and 2007. He was a star on the rise when he made his first feature in Vancouver, 1988's Watchers, and in decline when he returned to film the direct-to-video Anything for Love, a comedy about a cross-dressing high school student. Haim was in comeback mode when he teamed one last time with Feldman for The Two Coreys (2007-2008), a two-season, 19-episode TV "reality" show shot in a rented house in Vancouver. He died in Los Angeles in 2010 at the age of 38.

Friday, August 7, 1987.
THE LOST BOYS. Written by Janice Fischer, James Jeremias and Jeffrey Boam. Music by Thomas Newman. Directed by Joel Schumacher. Running time: 99 minutes. 14 Years Limited Admission with the B.C. Classifier's warning: some violence, occasional swearing. HE'S THE NEW KID IN town. Teenaged Michael Emerson (Jason Patric) has just moved to seaside Santa Clara with his newly-single mother and younger brother Sam (Corey Haim). He wants to be one of the boys.
One phantasmagorical night, he's tested. The Boys, a quartet of night-riding bikers, are   impressed. Following an unnerving initiation, he's accepted.
In a cave beneath a Pacific cliff, he's offered a bottle full of dark liquid. "Drink some of this,'' urges David (Kiefer Sutherland), the gang's sinister, smirking leader. "Be one of us."
Membership in this company confers certain privileges. "You'll never grow old,'' David assures him. "And you'll never die."
And what must one do to maintain standing in this undead community?
"You must feed!"
In the serio-comic world of The Lost Boys, Dracula meets Peter Pan with striking results. A stylishly contemporary flight past the second star to the right, it turns the classic dream of perpetual childhood into a nightmare of eternal adolescence.
Here, Never Land's lost boys cruise the California coast. Their feeding behaviour has won Santa Clara the sobriquet "murder capital of the world. "
In developing the tale, screenwriters Jeffrey (The Dead Zone) Boam, Janice Fischer and James Jeremias extract a full measure of dark humour from the situation. Michael Emerson's frightening struggle to remain human is balanced with young Sam's desperately funny encounters with the vampire-hunting Frog brothers.
"Take this," Edgar Frog (Corey Feldman) says, handing Sam a copy of Vampires Everywhere Comics. "lt could save your life . . .
"Read this," he says of Destroy All Vampires Comics. "Think of it as a survival manual."
Together with his brother Alan (Jamison Newlander), Edgar joins Sam in a search for the head vampire, the one who must be killed to release all the half-vampires like Michael, and Michael's new girlfriend Star (Jami Gertz).
Among the candidates is an unsuspecting dinner guest named Max (Ed Herrmann), the bespectacled video store owner who is politely courting the Emerson boys' mom, Lucy (Dianne Wiest).
Inspired, perhaps, by the directorial achievements of his executive producer, Richard (Omen, Lethal Weapon) Donner, director Joel Schumacher outdoes himself. He offers filmgoers a deft, accomplished and richly evocative horror comedy.

Afterword: The Lost Boys was not the first vampire comedy. Twenty years earlier, director Roman Polanski parodied Britain's Hammer horror films with his The Fearless Vampire Killers (1967), after which the director gave up trying to be funny. Stan Dragoti, a director who specialized in comedy, had no better luck with his Love at First Bite (1979), in which George Hamilton's Dracula moves to modern New York. Tom Holland came closest to getting it right with his Fright Night (1985), the story of teenaged movie fan William Ragsdale, who is convinced that his new neighbour Chris Sarandon is a vampire. The same year, Howard Storm's more frantic Once Bitten (1985) featured Hollywood newcomer Jim Carrey co-starring with Lauren Hutton as teen prey and vamp predator. Mercifully forgotten is Richard Wenk's Vamp (1986), a frat boys feature in which Grace Jones had the title role. That said, 1987's The Lost Boys marked a turning point. Joel Schumacher's stylish feature got it right, layering its comedy with the youth culture of the mid-1980s. The movie's poster line — "Sleep all day. Party all night. Never grow old. Never die. It's fun to be a vampire."  — made an impact. The movie made a lot of money for its producers, and enabled vampires to cross over from creepy to cool. The undead party animals that it loosed infest the popular culture to this day.

See also: Among Joel Schumacher's other fascinating features was 1993's serio-comic Falling Down, in which Michael Douglas plays a laid-off California defence worker driven around the bend by the "freelance economy" that was the glory of the Reagan years.