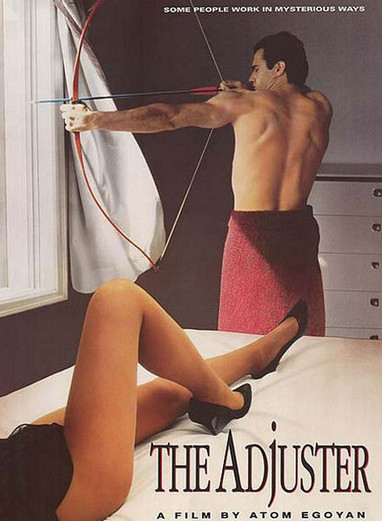 
A director firmly focused on film as an art form, Atom Egoyan makes the sort of cool, complex features that film-festival audiences love. Born on this day (July 19) in 1960, the internationally acclaimed Canadian included censorship among his targets in 1991’s The Adjuster.

Friday, January 31, 1992.
THE ADJUSTER. Music by Mychael Danna. Written and directed by Atom Egoyan. Running time: 102 minutes. Restricted entertainment with the B.C. Classifier’s warning: some suggestive scenes and language, occasional nudity. HE SHOOTS AN ARROW into the air.
For reasons of deep, unnecessarily obscure significance, Noah Render (Elias Koteas) is an off-hours archer. He often stands at his window, firing arrows into billboards advertising the several styles of home that were once planned for construction in the now-abandoned Sherwood Forest Estates housing development
Not that he has many off hours. The Adjuster for an unnamed insurance company, Render appears to be on 24-hour call.
A deeply caring individual, he arrives right behind the fire engines when a policy-holder's home burns to the ground in the middle of the night. At least one local motel makes ends meet in the off season by providing rooms for his clients.
Render understands. Played by Koteas in Kyle MacLachlan mode, he reminds people over and over again that they're "in shock."
He offers consolation and, on occasion, soothing sexual release.
Writer-director Atom Egoyan wants us to understand. "I have made a film," (he tells us in advertising for his picture) "that concerns an insurance adjuster, some film censors, an ex-football player, an aspiring cheerleader, a podiatrist, an actress, a lamp merchant, a butterfly collector and the devoted staff of a large motel.
"Everyone is convinced of what they are doing.
"No one is convinced of why they are doing it.
"I wanted to make a film about believable people doing things in an unbelievable way."
Egoyan, an Egyptian-born Canadian, wants us to know that he's not just a moviemaker, he's a film artist. And he has the tony film festival awards to prove it.
Cinema art buffs who enjoyed his techno-chic 1989 feature Speaking Parts may actually squeal with delight at his new symbol-heavy psycho-drama. Stitching sub-plots involving hypocritical censors — Egoyan's actress wife Arsinée Khanjian is seen as a member of the Ontario censor board — and perverse, role-playing rich folk into its fabric probably makes his current essay politically correct as all get-out.
It's also obvious, superficial and largely unoriginal. The sad thing is that Egoyan is going after all the right things. He just gets them backwards, making The Adjuster a film full of unbelievable people doing some too-believable things.

Afterword: With 15 prize-winning theatrical features to his credit to date, Atom Egoyan is a cinema success story. In 2001, Take One’s Essential Guide to Canadian Film noted that “Egoyan has emerged as not only the most commercially successful member of the Toronto new wave, but also as a cultural voice that speaks to a hip, more inclusive vision of Canadian society.” His fourth feature, The Adjuster earned him his fourth Genie Award nomination for best direction, after having won a Special Jury Prize at 1991’s Moscow International Film Festival and the best Canadian picture nod from the Toronto International Film Festival. His seventh feature, The Sweet Hereafter (1997), earned him Oscar nominations for best direction and screenplay. My own reaction to Egoyan’s oeuvre is much the same as to that of American director Martin Scorsese: while I respect his ideas and ambition, I don’t like his dramatic style. My preference is for warmth and passion. Egoyan’s approach is cool and academic. In 2002, he courted controversy by making Ararat, a movie about the making of a movie about the 1915 Armenian Genocide. His most recent release, 2015’s Remember, brings together the themes of the Holocaust and dementia to tell the story of an elderly Auschwitz survivor (played by an 84-year-old Christopher Plummer) who leaves his New York nursing home on a quest for vengeance. Born in Cairo, Egypt, and raised in Victoria, B.C., Atom Egoyan turns 56 today (July 19).