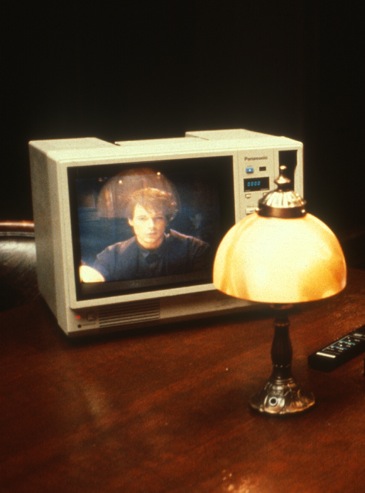 
Sex and the scan-lined psyche


Perhaps the most successful director to emerge from Toronto's "New Wave" moment in the 1980s, Atom Egoyan was born on this day (July 19) in 1960. He became famous for charting a course between experimental and exploitation cinema in such films as 1989's Speaking Parts.

Wednesday, March 28, 1990.
SPEAKING PARTS. Music by Mychael Danna. Written and directed by Atom Egoyan. Running time: 92 minutes. 14 Years Limited Admission with the B.C. Classifier's warning: occasional nudity and suggestive scenes. FROM THE SET OF his current film project, the Producer (David Hemblen) takes time out for a teleconference call with an actor named Lance (Michael McManus).
An ambitious extra and would-be film star, Lance has not yet signed his contract. Facing the image of the Producer on a closed-circuit video screen, he complains about changes that have been made in the screenplay.
The Producer asks Lance if he watched television as a child. He tells the young man that he created hit shows back then and that he, the Producer, remains in charge now.
Accept my authority, he tells Lance. Sign your contract. Enter the world of Speaking Parts.
This, Atom Egoyan seems to be saying, is the ethos of the commercial cinema. In interviews, the Egyptian-born Canadian writer-director says that the world is divided into "those who make images, and those who may only consume them."
A renegade image maker, Egoyan sets out to warn those of us trapped in the consumer class. With the best of pretensions, he's devised Speaking Parts to help us distinguish between what's real and what's not.
His storyline, such as it is, concerns two women obsessed with video-taped memories — images — of a male.
Clara (Gabrielle Rose), a screenwriter, mourns her late brother Clarence. We see her viewing his image on a wall monitor in a high-tech mausoleum.
Lisa (Arsinee Khanjian), a hotel chambermaid, endlessly views movies in which her co-worker and fantasy lover Lance appears as a background extra. Though they live in the same building, Lance ignores her declarations of love.
Because he resembles Clarence, Clara insists that he be cast in The Transplant, the movie that the nameless Producer is shooting from her screenplay. It is, we eventually learn, the story of a brother who sacrifices himself for his sister, Clara's own true story.
His artist's agenda notwithstanding, Egoyan can't resist the lure of the lowlife.
Lance, the focus of the all this emotional attention, is a male prostitute. Between acting jobs, he's one of the houseboys that the hotel makes available to its important female guests.
Though it has been compared to the 1989 American independent feature Sex, Lies and Videotape, Speaking Parts is firmly rooted in Toronto's own self-absorbed vidiot tradition.
From David Cronenberg (Videodrome,1983) to Peter Mettler (The Top of His Head, 1989), Central Canadian film-makers have contemplated the effect of scan lines on the human psyche with varying degrees of success.
Egoyan, though unburdened with anything resembling a new idea, goes at his work with a will. An extended exercise in obviousness, his grim psycho-drama is personal art of the techno-chic kind.

Afterword: Speaking Parts was the second part of Atom Egoyan's unofficial trilogy that began with 1987's Family Viewing, and concluded with The Adjuster (1991). Each of the films dealt with aspects of media imagery and transactional sexuality in a sort of chilly, formal way that directly challenged Ontario's reactionary censor board. Born in Cairo, Egypt, but raised in Victoria, B.C., Egoyan drew upon his outsider sensibility to frame his ideas as cinema art, which he skillfully shopped around on the festival circuit. Family Viewing, for example, won the best Canadian Feature award at 1987's Toronto International Film Festival, while Speaking Parts earned Egoyan the best Canadian screenplay nod at 1989's Vancouver International Film Festival. The Adjuster received the 1991 Moscow International Film Festival's special jury prize. As his films got bigger, the awards got better. His 1994 feature Exotica was honoured at Cannes with the International Federation of Film Critics prize and, in the U.S., with the AVN award for best alternative adult film at ceremonies sponsored by Adult Video News, the trade journal that covers the alternative (porno) movie industry. America's mainstream industry later embraced him for his 1997 filmed-in-B.C. feature, The Sweet Hereafter, nominating him for its best director and screenplay Academy Awards.