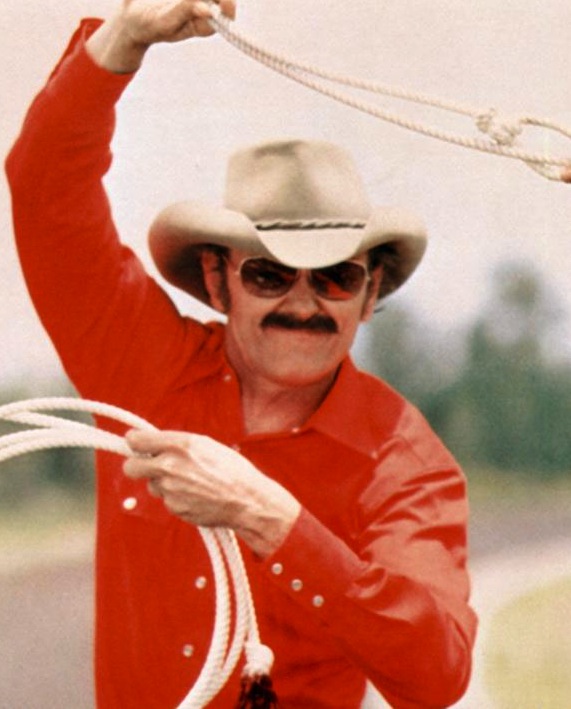 Stepping into the starring role, the Snowman (Jerry Reed) takes the wheel and ropes the villains in Smokey and the Bandit - Part 3.


Spectacular stunts in search of a story


Heroes take heed. You can never, ever take your sidekick for granted. An essential life lesson, it was driven home to me in 1957, the year that Decca Records issued a vinyl LP called The Adventures of the Lone Ranger, with a comic art cover that showed the Masked Rider of the Plains being pursued by hostile native Americans. "What do we now, old friend?" he asks his faithful Indian companion. "What do you mean we paleface?" Tonto replies, answering his question with a more profound question. No longer the stolid (or comic) kemo sabe, today's sidekick doesn't just expect respect, he (or she) demands it. Who can forget the moment in that fourth season Buffy the Vampire Slayer episode ("Fear Itself," aired in Oct. 1999) when an enraged Willow turns on the Chosen One and snarls "I'm not your sidekick!" Yes, the times really have changed. Today (March 20), the first day of spring, is the perfect occasion for a celebration of the sidekick, because it is also Jerry Reed's birthday. As Cledus Snow, he played trucker Beau Darvelle's good buddy in all three Smokey and the Bandit movies. A country and western singing star in his own right, Reed got to be the Bandit, wear the hat and drive the car in 1983's Smokey and the Bandit - Part 3.

SMOKEY AND THE BANDIT - Part 3. Even the Bandit decided to give this one a pass.
It's not that Burt Reynolds, the original "Bandit" Beau Darvelle, is stuck up. A genuine good old boy, Reynolds answered the call when his long time good buddy Hal Needham asked him to be in Smokey and the Bandit II (1980).
The first film had been a hoot. A superb combination of mood, music (composed and performed by Reynolds' co-star Jerry Reed), real romance and manageable scale, it was the second-biggest moneymaker of 1977. (No mean feat when you recall that that year's No. 1 picture was Star Wars.)
The second film was your basic sequel, a cast reunion with the original's director. Bigger and more expensive than the original, it was also considerably less fun.
There's no fun at all in Part 3. A collection of car stunts in search of a story, this mirthless country comedy is a barefaced attempt to take the money and run.
Made-for-TV movie veteran Dick Lowry takes director Needham's once bright and timely concept and reduces it to crude caricature. Once again, we see the wealthy Burdettes, Big Enos (Pat McCormick) and Little Enos (Paul Williams), filling in their idle hours with silly wagers.
They've bet retired Texas "county mountie" Buford T. Justice (Jackie Gleason) that he can't drive the 1,352 miles [2,176 km] from Miami to Austin in 24 hours. They then lure the Bandit out of retirement to enflame Buford's old obsession with hot pursuit.
The "real" Bandit not being available, they bribe his old trucking partner "Snowman" Cledus Snow (Jerry Reed) into playing the role. "I'm going to be the Bandit!" Cledus chants, as he dances around his room. " . . . wear the hat, drive the car."
Along the way Cledus picks up his own lippy runaway, TV pitchwoman Dusty Trails (Colleen Camp). Buford, as usual, is encumbered by his sweetly dim son, Junior (Mike Henry).
It may be the old gang together again — even Reynolds makes a brief appearance — but it's just not the same. This is one old comedy clunker that never gets out of first gear.

Afterword: Genial, with a quick, easy smile, Jerry Reed was a good old boy with the emphasis on good. He made his feature film debut opposite Burt Reynolds in 1975's W.W. and the Dixie Dancekings. They became good buddies in real life. Of his 10 subsequent movie appearances, four would be in films where he played Reynolds' sidekick. In his one trip to Canada, Reed essentially reprised his Cledus Snow character (and provided a title tune) as Peter Fonda's sidekick in Toronto director Peter Carter's trucker drama High-Ballin' (1978). It was as a musician that Reed achieved top billings. A songwriter and distinctive guitar stylist, he had a 40-year-long career as a recording artist that included such memorable country hits as "When You're Hot, You're Hot" (1971), "Lord Mr. Ford" (1973), the Smokey and the Bandit theme song "East Bound and Down" (1977), "She Got the Goldmine" and "The Bird" (both 1982). Reed died in 2008 at the age of 71.