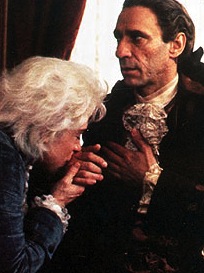 
Amadeus celebrates divine spark in us all


We all love a mystery. Even before the 18th-century English poet Anon. posed the question "who killed Cock Robin?", there existed an interest in unsolved mysteries. Bookshelves groan beneath the weight of tomes devoted to "what killed the dinosaurs?" and "who was Jack the Ripper?" A few weeks ago, Reeling Back took note of a number of movies posing answers to the question "who killed John F. Kennedy?" At some point, we'll look at some of the other headline deaths that have intrigued movie-makers, inspiring them to make feature films concerned with who killed Jimmy Hoffa (F.I.S.T., 1978; Hoffa, 1992); who killed the Black Dahlia (True Confessions, 1981); who killed Sir Harry Oakes (Eureka, 1983); who killed Archbishop Oscar Romero (Salvador, 1986; Romero, 1989); who killed Dian Fossey (Gorillas in the Mist, 1988); or even Who Killed the Electric Car? (2006). Modern music has its own mysteries, including who killed Kurt Cobain and who killed Tupac Shakur. Among classical music aficionados, one of the most intriguing is "who killed Mozart?" (who died on this day, Dec.5, in 1791), the question addressed in Milos Forman's brilliant 1984 feature Amadeus.

Thursday, September 20, 1984.
AMADEUS. Written by Peter Shaffer. Music by Wolfgang Amadeus Mozart, co-ordinated by John Strauss; conducted and supervised by Neville Marriner. Directed by Milos Forman. Running time: 157 minutes. Mature entertainment with the B.C. Classifier's warning: occasional coarse language. THE MAN IS MADDENING. A prodigy, this Wolfgang Amadeus Mozart (Tom Hulce) creates music that is perfect. Melodies flow from him as if dictated by God Himself.
Maddened by him is Antonio Salieri (F. Murray Abraham), court composer to Austria's Emperor Joseph II (Jeffrey Jones). How can a just God choose for His instrument "a boastful, lustful, smutty, infantile boy"?
Salieri feels the pain of a cosmic betrayal. As a child, he entered into a covenant with the Creator, trading his chastity, unremitting industry and deepest humility in exchange for the gift of music and the immortality of a great composer.
Why then has the miracle Salieri so craves been granted to the miserable Mozart, "a giggly, dirty-minded creature"? Why does God torment Salieri so?
The movie is a masterpiece. Recognizing that genius is an unknowable commodity for most mortals, Amadeus introduces us to an intermediary, the self-proclaimed "mediocrity" Salieri.
A tale told in flashback, the picture takes the form of the elderly Salieri's "confession" to the murder of Mozart some 32 years after the fact.  Like Judas in Jesus Christ Superstar (1973), Salieri's lucidity-in-madness gives the drama its focus and an ultimately tragic point of view.
Adapted by Peter Shaffer from his 1979 stage play, Amadeus is presented as "a fantasia on Mozartian themes." Shaped for the screen by Milos (One Flew Over the Cuckoo's Nest) Forman, it is an excursion into Ken Russell territory, offering filmgoers an imaginative look at some aspects of the man and his music.
As in all Forman projects, the essential warmth and humanity of the filmmaker shines through. Taking the position that no man sees himself as a villain, Amadeus ends up being a celebration of the divine spark in all men.

Afterword: One more mystery to consider. Why such a brief review for a movie I considered "a masterpiece"? I might have said more about its director Milos Forman, whose 1979 adaptation of Hair was one of my favourite films of that year. The actors certainly deserved greater attention, with Tom Hulce, F. Murray Abraham and Jeffrey Jones all giving the performances of their lives. And then there was the music, performed on the soundtrack by London's Academy of St. Martin-in-the-Fields under the supervision of Sir Neville Marriner. The soundtrack recording, originally issued on two vinyl LP discs, became one of the best-selling classical music albums ever. My insufficient praise notwithstanding, Amadeus was nominated for 11 Academy Awards, winning eight (including Best Picture and Best Director). Both Tom Hulce and F. Murray Abraham were in the running for Best Actor, with Abraham collecting the Oscar.