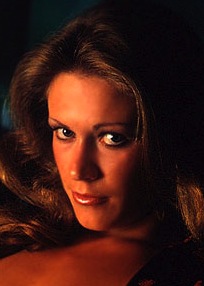 Sandra Chase (Marilyn Chambers) embodies the fantasy of a woman who is attractive, independent and indulges herself without emotional involvement in the X-rated feature Insatiable.


Crossing from Rabid to Insatiable

Wednesday, August 6, 1980.
INSATIABLE. Written by Daniel Short. Music by Don Sciarotta. Produced and directed by Godfrey Daniels. Running times 80 minutes. X-rated entertainment. WHAT DO TRIPLE-X film fans want? According to Marilyn Chambers, America's ranking porno princess, "they don't want glamour queens, and they don't want someone else's wife.
"What they want," she told me during a Vancouver visit, "is someone who'll go along with their fantasies, someone who's touchable and real. They want me to be Marilyn Chambers all the time. They want to believe that that image is real."
Friday [Aug. 1,1980], the real Marilyn Chambers pressed her hands into a patch of wet concrete to create a permanent memento of her appearance in front of Blaine, Washington's SeaVue Theatre. For three days, she was on hand at showtime to meet her fans, sign autographs and generally promote Insatiable, her return to adult-audience features.
Insatiable, produced and directed by the pseudonymous "Godfrey Daniels," [Stu Segall] is a technically sophisticated attempt to blend elements of fantasy and reality to create an effect pleasing to fans of sexually-explicit films. Like the softcore Emmanuelle (1974), a carefully crafted French-language feature that played for more than five years in Paris, Insatiable tries for a mood of "elegant erotica."
Chambers plays Sandra Chase, an orphaned heiress who is a successful fashion model  embarking on a career as a movie actress. The film opens with Sandra alone in bed enjoying an early morning dream.
Sandra, a single, has two confidants. To her aging aunt Victoria (Joan Turner), a proper British matron, she talks in properly general terms about her ambitions and emotions.
To Flo (Jesie St. James), her friend and agent, she reveals the details of her dreams and intimate liaisons. Ever since her first sexual contact (an incident that was more a violation than a seduction), Sandra has bean "insatiable."
Here, then, is the fantasy. Sandra, independent, attractive and insatiable, indulges herself without emotional involvement. The reality, of course, comes from the fact that actress Chambers is a sexual performer of considerable skill and convincing enthusiasm. For the audience, her touchability is not a matter of rumour, but of cinematic record.
An expensive production by the standards of the genre, Insatiable was shot on location in London and Northern California. Its original musical score contains a number of songs that are capably performed by Chambers as background voice-overs.
During our earlier conversation, Chambers recalled being among the actresses tested for the co-starring role in the 1979 George C. Scott feature Hardcore.  In it, Scott plays a distraught Midwestern businessman searching for his runaway daughter in the California porno subculture.
He is helped by a brash young triple-X actress, a part that finally went to Season Hubley. "They said that I wasn't convincing as a porno queen," Chambers said, flashing a big, toothpaste-commercial smile.
"It was too bad, really. I think I could have brought something to that part."

Afterword: As I said in my afterward to 1976's The First Nudie Musical, the social and cultural changes that resulted from the baby boom generation's coming of age in the mid-1960s were a serious challenge to daily newspapers. Covering the feature films released in Vancouver was a service we provided to our readers. Less obvious, but every bit as important, the newspaper supported the business objectives of its regular advertisers, the motion picture theatre chains. For the most part, though, it could ignore the family-owned SeaVue theatre that operated just across the Canada-U.S. border in Blaine, Washington. Yes, we knew that it featured the latest porno-chic sensations out of San Francisco and New York and, yes, its patrons were mostly Canadians from the Vancouver area who, in those pre-Homeland Security days, did not need a passport to cross the line. It was harder to ignore the SeaVue when Marilyn Chambers, the star of one of its first-run attractions, arrived in town on a promotional tour. And, yes, the American theatre had become a regular advertiser on our entertainment pages. I had missed the opportunity to interview Chambers when Famous Players Theatres refused Canadian distributor Cinepix Films' offer to bring her to Vancouver to promote its 1977 release Rabid. I had questions for her about that project, and about the social phenomenon that the booming adult film market represented. She was an articulate and insightful spokesperson for herself and for her work.

See also: My 1980 interview with Marilyn Chambers, during which we discussed her experience working with David Cronenberg on Rabid (1977); My reviews from 1976 and 1980 of Alice in Wonderland , contrasting the films shown in Vancouver and Blaine, Washington.