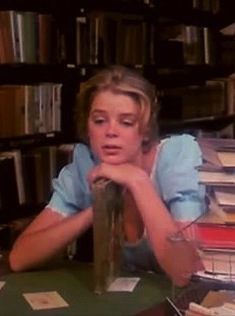 Alone in the library, Alice (Kristine DeBell) sings I Guess I Was Just Too Busy, the first of four songs she performs in the 1976 film.

Being Alice no easy role


On this day in 1864 (Nov. 26), Charles Dodgson, a 32-year-old Oxford mathematician, delivered an early Christmas present to 12-year-old Alice Liddell — his manuscript of Alice's Adventures Underground. Dodgson, who adopted the pen-name Lewis Carroll, published an expanded version of the story a year later as Alice's Adventures in Wonderland. The book and its sequels became literary classics and, for the rest of her life, Alice Liddell would bear the burden of having been its inspiration. (Widowed and strapped for cash in 1926, she sold her Christmas gift for £15,400.) Part of the popular culture, Carroll's Alice has inspired countless re-imaginings and many feature films. Disney's 1951 cartoon version is the best known, while director Tim Burton's 2010 live-action 3D fantasy is the most lavish, and the made-in-Vancouver TV mini-series Once Upon a Time in Wonderland the most recent. Then there was the 1976 Alice in Wonderland, the one that billed itself as "an X-Rated Musical Comedy." Reeling Back looks at this cinematic oddity, and at Kristine DeBell, the actress who would bear the burden of having played its title role.

Wednesday,  November 23, 1976
ALICE IN WONDERLAND. Written by Bucky Searles (as B.A. Frederickson), based on characters created by Lewis Carroll. Music and lyrics by Bucky Searles. Directed by Bill Townsend. Running time: 88 minutes (softcore, 1976). Restricted entertainment with the B.C. Classifier's warning: "a sex version of the fairy tale." Running time: 95 minutes (hardcore, 1980). Rated X in the U.S. AH, THE VICTORIANS! They set the foundation stones for the world we live in. Their fantasies continue to inspire us. Currently, an imaginative 19th century novel is in release in a particularly 20th century movie adaptation. Some interesting, perhaps shocking alterations are on view.
Alice in Wonderland is, of course,  inspired by the Alice stories of Lewis Carroll,  in constant print since their original publications in 1865 (Alice's Adventures in Wonderland) and 1872 (Through the Looking Glass).  As with his last film,1974's Flesh Gordon, producer Bill Osco is here offering a sex comedy based on a nostalgia classic.
The new film gets off to a surprisingly good start. It introduces its contemporary Alice (Kristine De Bell) as a bookish librarian who has been resisting the advances of her garageman boyfriend, William (Jason Williams, who had the title role in Flesh Gordon).
Alone in her library, Alice lets down her hair long enough to sing a tuneful, self-questioning song (Guess I Was Just Too Busy), and step into a lively solo dance number. Director Bill Townsend shows us that his star, former Playboy cover-girl De Bell, has some real performing talent that is well suited to musical comedy.
When a White Rabbit (Larry Gelman) appears from behind a bookshelf, she follows it through her looking glass in an impressive explosion of Disney-like sparkles.
Alice's initial adventures are handled with grace and charm. De Bell manages to convey a sense of innocence and healthy wonderment about her own body. A mood of cheerful inquiry is developed which, if it had been maintained, might have made this the kind of film that a parent could take his child to for a bit of wholesome sex education.
In those scenes, Alice is introduced to a kind of naturalistic  nudity (when she shrinks, her clothes do not; she has to wrap herself in her now bedsheet-sized handkerchief). She explains to a trio of  friendly forest creatures what breasts are for (milk for babies) and she gets some advice about her body from a wise old boulder ("there isn't any one part of you that's nice and another that isn't nice").
So far, so pleasant. Unfortunately, director Townsend's film suddenly takes a turn for the gross, one from which it never recovers.
Significantly, it comes at the point where specifically male characters show up in the film. The Mad Hatter (Allan Novak), for example, turns out to be a flasher. The King of Hearts (John Lawrence) is a self-indulgent stud.
Together with other characters, they use the innocent girl to satisfy themselves. That changes the mood from one of gentle, friendly discovery into typical exploitation-film fare. From a charming start, Alice in Wonderland collapses back into a formula fornication feature.
* * *
ALICE UNDRESSED: Although it may shock some of her fans, the idea of a nude Alice probably would have appealed to her creator. During his lifetime, the Reverend Charles Dodgson, the Oxford math lecturer who wrote under the name Lewis Carroll, assembled quite a collection of nude female photo studies.
Dodgson, a bachelor, was enchanted by the beauty of pre-pubescent girls. He liked to sketch and photograph them in the nude. According to Martin Gardner, editor of The Annotated Alice (1960), his "principal hobby — the hobby that aroused his greatest joys — was entertaining little girls."
It was all quite proper, though. Dodgson's "child-friends" always modelled for him with their mothers' permission. On his death, all photos were returned to their subjects.

Sunday, July 13, 1980
THE FIRST TIME I saw her, she was dressed in blue. Her blonde hair was tied back in a severe bun and her manner was demure, but there was no hiding the fact that behind her librarian's glasses she was a beautiful young woman.
The first time I saw her was in November, 1976. Her billing was Kristine De Bell — today she prefers DeBell — and she had the title role in an adult-oriented musical comedy called Alice in Wonderland, a film that played Granville Street's Odeon Theatre.
The movie had been produced by Bill Osco, whose previous film, the science-fiction spoof Flesh Gordon, also played the Odeon. The B.C. classifier warned that Alice was "a sex version of the fairy tale,"  and I went along to file my own consumer's report.
I was pleasantly surprised. My review, published here on November 23, 1976, said that "The new film gets off to a surprisingly good start . . . Alice's initial adventures are handled with grace and charm."
Back then, I was impressed with just how much talent DeBell displayed. Her singing, dancing and acting were all above par for an exploitation film star. I did wonder if she would ever be seen in anything other than sexploitation movies.
A year later, I saw her again. She had a bit part in a marvellously  funny Universal Studios comedy called I Wanna Hold Your Hand, a picture executive produced by Hollywood wunderkind Steven Spielberg.
In 1978, she was a supporting player in Bloodbrothers, a Warner Brothers release. She was Cheri, the girl that construction worker Richard Gere was desperately trying to impress.
In 1979, she did another bit part. Barbra Streisand may have been the star, but I remember The Main Event as a Kristine DeBell picture.
Last year, she was given featured billing in Meatballs, Ivan Reitman's money-making Canadian summer camp comedy. She played A.L., part of Camp North Star's crew of Counselors In Training (CITs).
Between features, DeBell works in television, appearing in commercials, series episodes and the occasional made-for-TV movie. Since her debut in Alice, she has established herself as a capable, competent actress in a variety of entertainment situations.
Her success makes the re-release of Alice all the more interesting. Its appearance at Blaine, Washington's Seavue Theatre, a venue specializing in triple-X adult fare, raises a number of questions — questions that are directly addressed in a prologue that appears at the beginning of the film.
Calling the current Alice "brand new," it tells us that during the original production scenes were shot that were not used in the final film. Apparently, producer Osco, drawing upon his experience with Flesh Gordon (a movie that was shot hardcore, but released to theatres as a softcore comedy), had decided that Alice was too good to be confined to the relatively small number of cinemas that make up the U.S. adult-film market.
As a result, Alice was edited for broader release, enabling it to play in mainstream markets, including Vancouver's downtown Theatre Row. Eventually, its box office potential as a softcore film played itself out.
Now, the producers are drawing upon the experience of George (Star Wars) Lucas, whose American Grafitti was successfully re-released after the director reinstated three brief scenes that had been cut from the original.
In  the case of Alice, the producer is re-releasing the hardcore version. Seven minutes longer, it would no longer qualify for a Granville Street booking. The sexual connections that were implied in the 1976 version are on view in the current edition.
In my 1976 review, I said that the first third of the film was charming. Then, the White Rabbit turns up again and the picture "suddenly takes a turn for the gross, one from which it never recovers . . . the mood [changes] from one of gentle, friendly discovery into the typical softcore exploitation-film fare. From a charming start, Alice in Wonderland collapses back into a formula fornication feature."
For its new version, that assessment seems unnecessarily harsh.
By comparison to the general run of triple-X product, Alice is an affection-oriented (albeit sexually explicit) feature. Its attitudes are reasonable, production values superior and DeBell's performance as good as I reported in 1976.
It's a film that I believe progressive feminists would recommend.
There was, however, one other question that I had when I crossed the border to review this "new" Alice. Was DeBell's performance being misrepresented?
I know that it's common industry practice to shoot footage for movies long after the original production has been completed. Occasionally, as in the case of Jane Fonda in the 1978 film Coming Home, other actors stand in for the stars when sexual performance is called for.
In this case the ads can be trusted. Kristine DeBell is the only Alice in this X-rated Wonderland.

The above are restored versions of Province reviews by Michael Walsh originally published in 1976 and 1980. For additional information on this archived material, please visit my FAQ.

Flash forward, 2016: No, the ads can't be trusted. On March 3, 2016, Kristine DeBell wrote to tell me that my 1980 conclusion (that she is the only Alice in this X-rated Wonderland) "is incorrect." After reading the above Reeling Back posting, she sent me a brief email. "I was not on set for the filming of the X rated scenes," she said. "They were added later." I believe her, and belatedly apologize for saying otherwise. (For the full text of her note, see my March 6 blog entry, He Said, She Says.)

Afterword: Though she would appear in seven more features, there would be no significant breakthrough role for DeBell. After Meatballs, she was top-billed in The Great American Girl Robbery (1979), a drive-in thriller about terrorists kidnapping a trio of cheerleaders, and The Big Brawl (1980), in which she played action star Jackie Chan's girlfriend. She had a supporting rolle in director Paul Mazursky's 1980 Jules et Jim remake, Willie & Phil, and was later featured in such forgotten films as Lifepod (1981), Tag: The Assassination Game (1982), Rooster: Spurs of Death! (1983) and Club Life (1986). Never forgiven was her single X-rated film credit, despite a decade of mainstream movie and television work. In her early 30s, she appears to have called it quits. She would not be forgotten, though. In a December 2010 posting, a blogger named Marc Edward Heuck