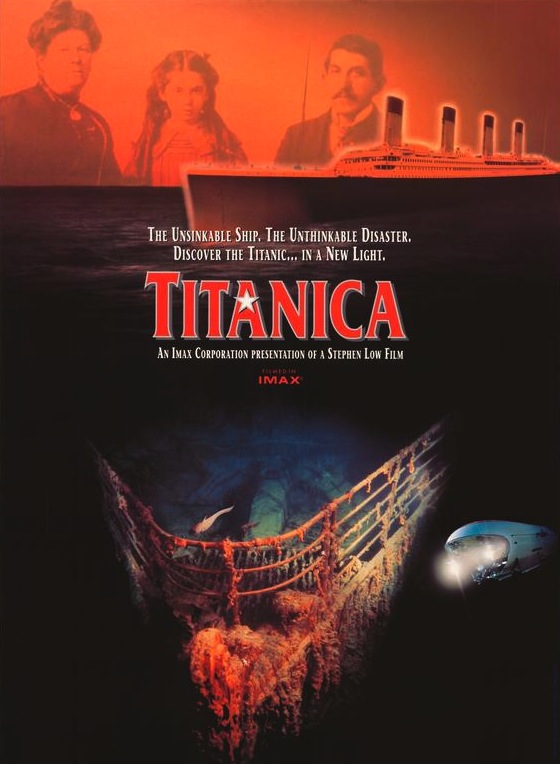 A Russian-built Mir submersible equipped with an IMAX camera is shown approaching the sunken ship's bow on the poster for Stephen Low's 1992 feature documentary Titanica.


On this day (April 10) in 1912, the R.M.S. Titanic set sail from Southampton. Four days into her maiden voyage, she hit an iceberg and sank. Not located until 1985, researching her wreck is the subject of director Stephen Low's 1992 IMAX documentary Titanica.

Thursday, April 8, 1993.
TITANICA. Documentary feature filmed in the IMAX process. Music by Eldon Rathburn. Produced and directed by Stephen Low. Running time: 95 minutes.
Full   fathom five thy father  lies;
Of his bones are coral made;
Those are pearls that were his eyes;
Nothing of him that doth fade
But doth suffer a sea-change
Into something rich and strange.

SINKABLE?
Unthinkable!
The R.M.S. (for Royal Mail Ship) Titanic was the crowning achievement of the new century. Named for the primordial Greek gods, the White Star liner was superlative in every way.
Biggest. Fastest.
Most luxurious. Most modern.
Safest.
On the tenth of April, 1912, she set sail from Southampton on her maiden voyage, and no one doubted that she was sailing into history. And so she was. Five days out, Titanic struck an iceberg.
Two hours and 40 minutes later, she disappeared beneath a calm, starlit sea, beginning a two-and-a-half-hour descent to the ocean floor.
That was then. A tragedy that has come to symbolize the folly of 19th-century technocratic optimism, Titanic's story has inspired books, plays, movies and epic poems.
Many dreamed of the day when our own super-science would finally raise the great ship from her four-kilometre-deep resting place.
We know now that will never happen. Located in 1985, the wreck is in two pieces.
In 1991, Toronto's IMAX Corporation joined with Moscow's Shirshov Institute of Oceanology and Washington's National Geographic Society in a visit to the gravesite. Recorded in Imax, the crowning achievement of 20th-century motion picture technology, their voyage is the subject of Titanica, the corporation's first docu-dramatic feature.
Stephen (The Last Buffalo) Low, one of the two best directors working in the giant screen process, brings us as close as we'll ever get to the "one ship that calls to us" from the depths. To enhance the entertainment experience, he's indulged in some creative fakery.
To provide historic perspective, Low obtained some absolutely stunning photographs from the archives of Harland and Wolff, the Belfast shipwrights who built Titanic. For emotional connection, he introduces us to 81-year-old Eva Hart, one of the tragedy's still-living survivors.
To achieve visual impact, images of the then-seven-year-old Hart, her little dog and teddy bear, have been added, Zelig-like, to the period pictures. Documentary purists will wince at this bit of tampering with the historic evidence.
It will come as no surprise, though, that scenes involving the scientists and crew of the good ship Akademik Mstislav Keldysh were staged. Strong personalities all, they take to "acting" themselves with hearty enthusiasm.
All is forgiven for what is indisputably real. Deep beneath the North Atlantic, Titanica shows us the true meaning of that much-misused phrase "sea change."
Bringing light into a world of permanent darkness, the expedition discovers an eco-system that makes of the wreck a living thing. Blind white Rattail fish, colourless crabs and wispy white plants all make the rusting corpse a habitat.
The Keldysh's  three-man submersibles, looking for all the world like Steven Spielberg creations, move across a "hell's kitchen" of silent, man-made debris. Together, we float over rusting decks.
In a film that is truly unique, Low's cameras tour a great human work frozen in death. He shows us the legend of Titanic, transformed (in the words of Shakespeare's Tempest) "into something rich and strange."

Afterword: A re-edited version of director Stephen Low's documentary was released on DVD in 1998. Nearly 30 minutes shorter than the theatrical feature that I reviewed in Vancouver's CN IMAX Theatre in 1993, it added the star-power of Leonard Nimoy, who narrates the recut movie. Titanica was the 13th theatrical film to focus on the 1912 marine disaster. (Television has contributed its own catalogue of features, mini-series, documentaries and show episodes on the subject.) The first, released just 29 days after the sinking, was a 10-minute American silent called Saved from the Titantic (1912). It was co-written by its star, 22-year-old actress Dorothy Gibson, an actual Titanic survivor who was romantically involved with the picture's producer.
The first feature based on the tragedy was called Atlantis, a 1912 Danish drama that introduced the element of a shipboard romance to the narrative mix. In 1943, during the Second World War, a German-made Titanic spun the story to include an upright German hero and much British capitalist villainy. (Magnanimous in victory, the Brits "borrowed" some of the more spectacular footage from the 1943 feature for their own 1958 release A Night to Remember.) Hollywood retold the story as a drama (1953's Titanic), as a musical (1964's The Unsinkable Molly Brown) and as an oddball adventure (1980's Raise the Titanic).
It was Canadian director Stephen Low's Titanica documentary that inspired Canadian-born James Cameron to seek funding from 20th Century Fox for his own version of the 1912 event. Released in 1997, his Oscar-winning Titanic ruled as top-grossing film of all time for 12 years. In 2009, it dropped to second place on the list, replaced by Cameron's  Avatar, the picture that holds the top spot to this day [April, 2016]. The Canadian connections came full circle in 2001, when Cameron returned to the disaster site aboard the Akademik Mstislav Keldysh, to film his own IMAX 3D docudrama, Ghosts of the Abyss (sometimes shown as Titanic 3d: Ghosts of the Abyss.)

See also: A man not afraid to get his feet wet, James Cameron is a serious diver and deep-sea exploration expert. In 1989, he wrote and directed his first submarine epic, a technically innovative science-fiction adventure called The Abyss.