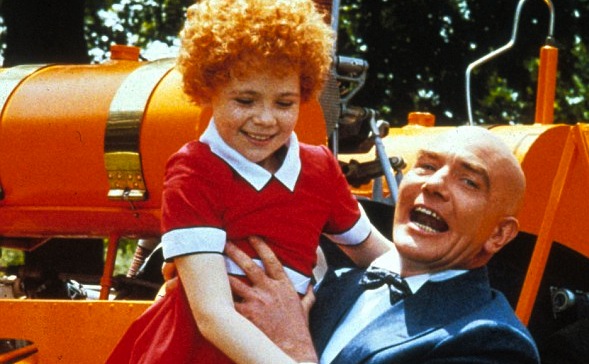 
Opening today (May 23), the 2015 edition of the Vancouver Comic Arts Festival (VanCAF) celebrates the cultural influence of graphic story-telling. What better time to test your knowledge of comics that have inspired filmmakers with a classic Strips to Screen quiz?

WANTED: A gifted young woman, age 7-10, to play "Annie." Must be able to sing, dance, act and play opposite Albert Finney. Good salary and instant stardom.

GARRISON TRUE IS LOOKING for a little girl. A casting director for Columbia Pictures, True is currently on a 21-city tour searching for the actress who will star in the film version of the hit stage musical.
Last week, True was in Toronto, the only Canadian city on his list. On Monday, November 3 [1980], he will be in Seattle, Washington, and the talent scout expects to see a lot of B.C. hopefuls at the audition.
Scheduled for release in the summer of 1982, Columbia's Annie is based on the adventures of the feisty comic strip heroine, Little Orphan Annie. Created by an Illinois-born cartoonist named Harold Gray, Annie made her newspaper debut on August 5, 1924.
A crowd pleaser from the start, Annie's rugged individualism inspired two feature films during the 1930s. Eleven-year-old Mitzi Green played the title role in David (Gone With the Wind) Selznick's 1932 production of Little Orphan Annie. Paramount Pictures used the title again in 1938 for a picture starring 10-year-old Ann Glllis.
Annie was neither the first nor the last comic strip character to have a Hollywood career. Over the years more than 100 strips have been brought to life on film. Perhaps you can recall the movie in which . . .

1.    A curly-forelocked Marlon Brando plays Jor-El, a scientist on the doomed planet Krypton and father of the film's title character.

2.    Child star Jackie Cooper has the title role in this adaptation of the stylish strip by Percy Crosby, a part that earned him a 1930/31 best actor Academy Award nomination.

Between 1938 and 1950, Penny Singleton and Arthur Lake co-starred in 27 feature films, a series of domestic comedies based on characters created in 1930 by Chic Young. A popular Province feature to this day [1980],  the comic strip is called . . .

2.    Skippy (1930). Though nominated for six Oscars, including best picture, its single win was for director Norman Taurog.

3.    Flash Gordon (1936), based on Alex Raymond's comic. Crabbe's hair was dark-coloured when he played that other hero of the spaceways, Buck Rogers, the creation of Philip Nowlan and Dick Calkins.

5.    Bringing Up Father (1928) J. Farrell MacDonald played Jiggs in this first screen adaptation of the George McManus comic strip that later came to be known as Maggie and Jiggs.

7.    Barbarella (1968). Fonda was married to the picture's director, Roger Vadim, who adapted Jean-Claude Forest's French comic to the screen.

10.    Prince Valiant (1954). One of the first films made in CinemaScope, it starred Robert Wagner as Hal Foster's prince of Thule.

The above is a restored version of a Province movie quiz by Michael Walsh originally published in 1980. For additional information on this archived material, please visit my FAQ.

Afterword: Since the silent era, filmmakers have found inspiration in the funny papers. Newspaper comic strips were their major source at the time the above quiz was written. Looking back, though, it's evident that a shift was taking place. The answer to the first question is the name of a character first seen in a comic book (though he had a long life as the hero of a newspaper comic strip). Today, comic books and graphic novels are the the go-to medium for producers in search of blockbuster film material. Currently, Reeling Back's index of movies Based on Comics contains 19 titles, with lots more to come.